Feudal-technology space humans - how can they generate mechanical energy?

Setting Background I'm working on an admittedly silly sounding setting. Technologically advanced space fairing humans become stranded on a ring of asteroids in orbit around a large planet. They have lost the vast majority of their technology in the process of becoming stranded, but the existing stations keep them alive. They rebuild slowly. The micro-gravity that they live in makes space travel accessible at a far lower level of technological process, and so by the time they have reached what we might consider medieval tech, they are scooting around the vacuum of space in resin-laminated wooden ships propelled by compressed air.

Constraints No electricity. No non-human animals of any kind. And no offense to people who are into this, but I am desperately trying to avoid steam power in order to keep this from getting too "Steam Punk". Like the ancient Greeks and many other peoples from antiquity, these folk understand that pressurized steam has force to it, but lack the mechanical precision to make an efficient steam engine - something that took a long time to figure out! 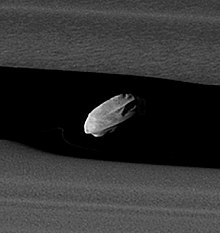 Saturns moon Daphnis cruises along in a gap that it has cleared in one of the rings. The rings are made of smaller stuff. Your medievals live on a similar rock and have erected wheels about the circumference of their rock. Like a waterwheel, these extract energy from impacting icy rubble as they pass by the slower ring on the outside and the faster on the inside.

Nobody knows how they were made. Like the Habitats, they are relics of a bygone age. A Device does nothing but turn, or reciprocate, or wiggle, with impossible torque and seemingly endless energy. Though they might have previously had some purpose they are now naught but motive curiosities.

Your people have hoarded what devices they can find, amassing some thousands of them. They have learnt the secrets of starting/stopping them and figured out methods to harness their immeasurable power using only primitive materials. One ship can get all the mechanical power it needs from a single Device, but as the supply is limited and nobody knows how to make more they are inconceivably valuable.

After all, how can one mill grain without the help of an unstoppable, indestructible, unfathomable, ancient motor?

This can depend on the star your planet and asteroids orbit, but you can have the light heat a black surface to create the temperature differential of a Stirling engine. 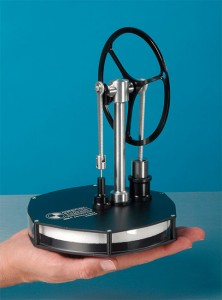 Solar Sails are large, thin sails used by small spacecraft. They operate off the miniscule amount of momentum delivered by photons, it may be small, but it is constant acceleration over a long period of time. These are used to move low mass objects to high speeds. You could set up solar mills that instead of sails moved by the wind, the photons move your massive sails.

Both of these would be best paired with Cast-Iron Flywheels with magnetic bearings. The heat differential and the photon momentum will be delivering low energy, but these can be built up to useable levels with a flywheel.

This is where the micro-gravity and vacuum help you out. If you are lucky enough to have some magnetic material, you can create an almost frictionless flywheel that has constant energy fed into it as long as the star shines. Your only real limits would be how much light your asteroids receive and the strength of cast iron. If you receive too much light, your flywheel could rip itself apart.

Piper was always pessimistic about human government. In this novel he posits an Industrial Feudal society. feudal does not have to equal low tech. Economically each company/fiefdom is in essence a company town, with services and employment provided by the fief holder. Individuals may have subfiefs within the fief. Each has oaths of fealty to the level above, and fief holders have duties and obligations to those below.

Another example is Larry Niven's novel Oath of Fealty which amounts to a feudal micro society within a broader capitalistic one.

Ken Follett's series of books, "Pillars of the Earth" and "World Without End" provide a good view of the network of obligations that filled the feudal world.

At it's core feudalism is a set of non equal but symmetric set of duties and obligations, rights and privileges.

You can see some of this in Company Towns. I knew the chief electrician for Winnipeg Hydro's dams at Point du Bois and Slave Falls. The company owned the entire town. Everyone rented from the company at nominal rates. The store was privately run, but the premises leased from the company.

Point du Bois was an oddity that arose from the only access initially was by train, and it didn't run on a regular schedule. Another company town was Potlatch Idaho, a lumber town. While housing was privately owned, the company just asked the city council for their budget, and wrote them a cheque. No property taxes. Company owners figured that this was their duty to people who were living and supporting their work. Company towns can be oppressive, as a means to make sure that your labour force barely breaks even, or they can be less oppressive, and just complicated.

In the alluded to book above, "Space Viking" piper makes a first order approximation to industrial feudalism.

Maybe you could harness a cryovolcano or geyser? I think those typically have methane in them, though, so I can't imagine why they wouldn't just burn that if their habitat is somehow still giving them enough of an earth-like atmosphere to burn wood and cast iron.

Not the answer you're looking for? Browse other questions tagged space medieval space-colonization orbital-mechanics engineering .

15
Why build space habitats on/within moons?
58
How would someone hide an asteroid in the void of space so only they could find it?
1
Can you generate energy from particles in space?
6
Energy costs of giving Mars and Venus moons: moving gas giant moons vs. capturing a rogue planet?
8
Why shouldn't we turn every star system into a Matrioshka brain?
5
The Colonist - Part I: Construction
0
Are Orbital Rings feasible to construct in another star system?
2
Could asteroids getting shredded in low Earth orbit by an alien probe result in Kessler syndrome capable of preventing ICBMs from functioning?
5
Getting around in Hell when you can't fly?