What would seasons and daylight be like if the Earth was on an eight-shaped orbit between two stars?

I'm building a medieval-high-fantasy world and I want it to have two suns. I'd like it to make it somewhat realistic at least as far as seasons and light/biomes go, while the actual feasibility of this kind of binary system can kinda be handwaved away. I also would like the two stars to be different, in the following example I opted for a yellow-reddish sun and a white one.

My first question is: would this configuration be tolerable and able to support life on the planet, or would there be problems (e.g. the white star being far too luminuous)? If not, what are some things I could change to make it viable and still have two suns that look different?

If it is viable, here's my main questions:

EDIT: I'm only interested in how it would affect human life (climate + how they experience seasons) and in keeping suspension of disbelief, I don't want a 100% realistical solution completely rooted in physics, I just want help in making it so that I can explain the seasons and the look of the stars to a group of TTRPG players without them raising an eyebrow :)

There's a lot of questions here - so I'm just going to focus on your main one about "what are the seasons and days like?" (the mods will probably make you edit your question down to this shortly anyway.)

That said I believe your planet will be habitable but on the hot side, I haven't done the calculations, because there are mitigation strategies available to you as an author - big mountains casting shadows, layers of ash from a permanently erupting volcano, white fluffy cloud layers reflecting sunlight, etc. If you run the physics and it's too hot, cool it down.

Here's the orbit and axial tilt as I understand it. 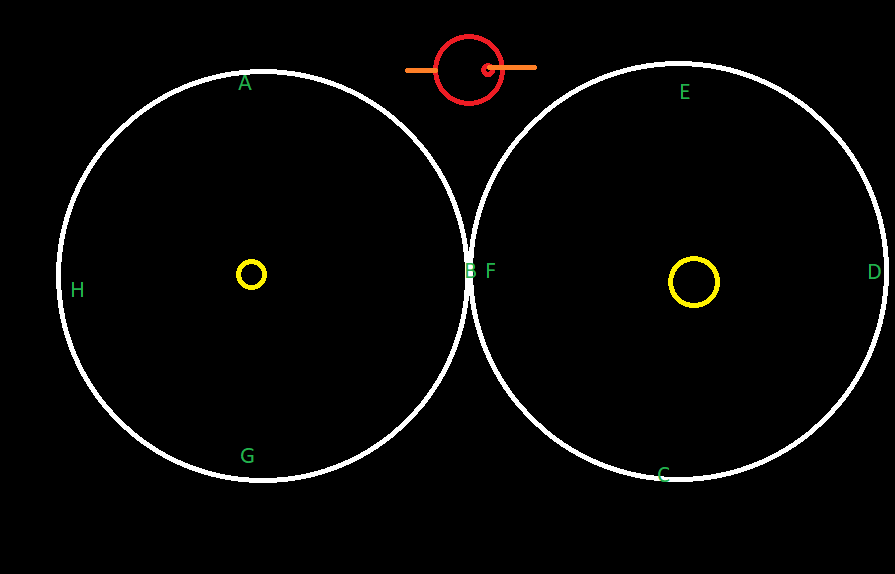 The relationship between the axial tilt and the plane is important here. I have guessed a relationship here - north pole pointing to the right, but you can tweak it to change things.

You have 8 seasons over your "Year" in the Northern hemisphere:

Southern hemisphere is a bit cooler but very similar:

Tides will be weird. You'd have twice daily high tides at B/F, and once daily double-high tides at H and D. Tides would be once daily but uneven lengths (long high, short low) at A, E, G, and C.

Now you have a wildly fluctuating climate that depend on:

So far no problem. This is much like earth, but with faster seasons due to a closer orbit.

On Earth at temperate latitudes there is about a 2 month delay between the astronomical seasons and the climatological seasons. E.g. The least sun is on the winter equinox, 22 December in the Northern hemisphere, but the coldest month is usually February.

Similarly daily variation is going to be dependant on how long the day is. If earth had 48 hour days, the daily variation would be brutal. It won't be linear with day length, as I would expect cloud formation to increase with longer days.

Longer day length will also decrease coriolus effect which should make storms larger in extent, but also decrease the temperature difference between equator and poles.

A short fast orbit around the small star will mean that seasonal variation will be smaller. But an eccentric orbit means a long time in the cold end of the orbit and a very short time near the star. The more eccentric the orbit, the more extreme the difference.

The orbit around the bright star can act as a multiplier.

At this point my mental model of the spherical trigonometry fails me. I think you get a super roasting when the plane of the planet's orbit has the bright star in the same plane.

Anyone know of online models -- simplified climate models where you can change the plane of orbit etc?

Not the answer you're looking for? Browse other questions tagged science-based planets stars solar-system sunlight .

4
Seasons on a circumbinary planet
7
What is the expected terrain for an arid highly eccentric Earth-like planet?
6
Seasonal progression for an Earth-like planet with wobbly axis tilt?
7
The (Alternative) Reason for the Seasons: Highly Eccentric Orbit
6
Is the temperature on my planet affected whenever my binary stars are aligned?
2
Longest possible eclipse in double star system
6
What would you need to have a planet orbiting two binary stars