What if the speed of light was based off wavelength?

Im making a sci fi story (first part here) and I needed a cool and interesting way to make ftl communication possible, at first I thought, make the speed of light infinite but thats kinda boring so I thought, maybe have frequency be a constant, and wave speed (the speed of light) not be. For example lets say the fixed frequency was 100hz, if a wave had a 500nm wavelength it would move at 50000 mn per second or 50 micrometers per second, (example end) so if this constant frequency was 600000000000000hz (yes thats right) what possibly unforeseen effects could this have?

I think it could be plausible, it would be inconsistent with our current models of light. But that doesn't mean that it doesn't occur, rather we haven't seen it.

Light is already known to travel at different speeds, for different wavelengths, in materials. Also in 2005 V.Gharibyan, measured that the speed of light might change for different wavelengths. So it may be possible in a universe that looks like ours, but it would have to be in environments that relativity breaks down (akin to how Newtonian physics breaks down at high speeds), but we don't know when that happens.

For an example, you could have a speed vs wave length graph like that shown below, where the red line is the 'classical' speed of light. 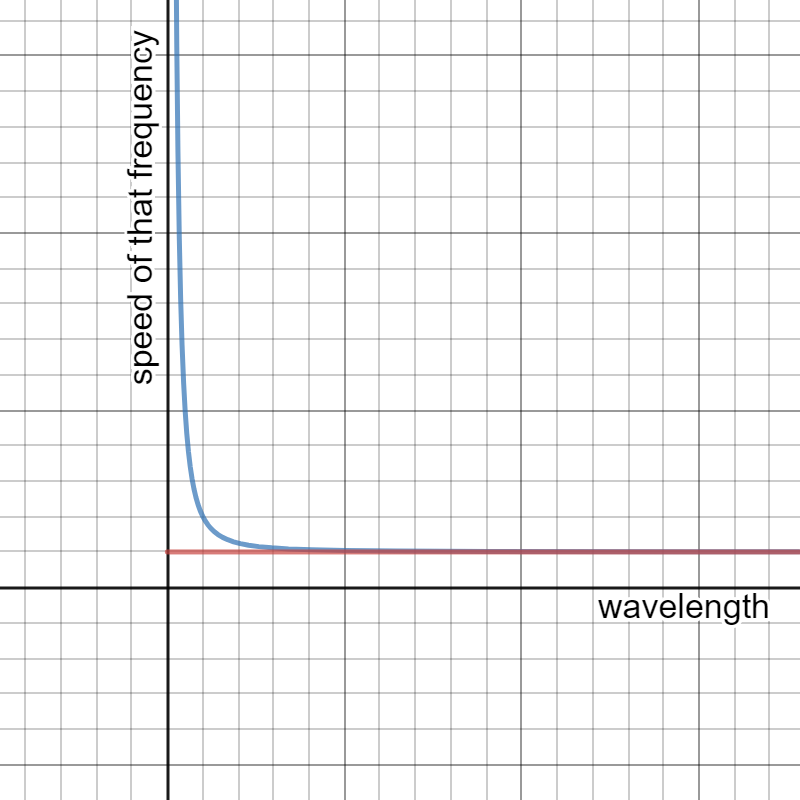 thus for longer wavelengths it would be approximately constant, and only deviates for shorter wavelengths. this could explain why it doesn't change the 'normal' physics as it only comes into effect at shorter wavelengths (which correspond to higher energy light), so faster communication would require more energy.

Or for another, you could have a speed vs wave length graph like that shown below, where the red line is the 'classical' speed of light. 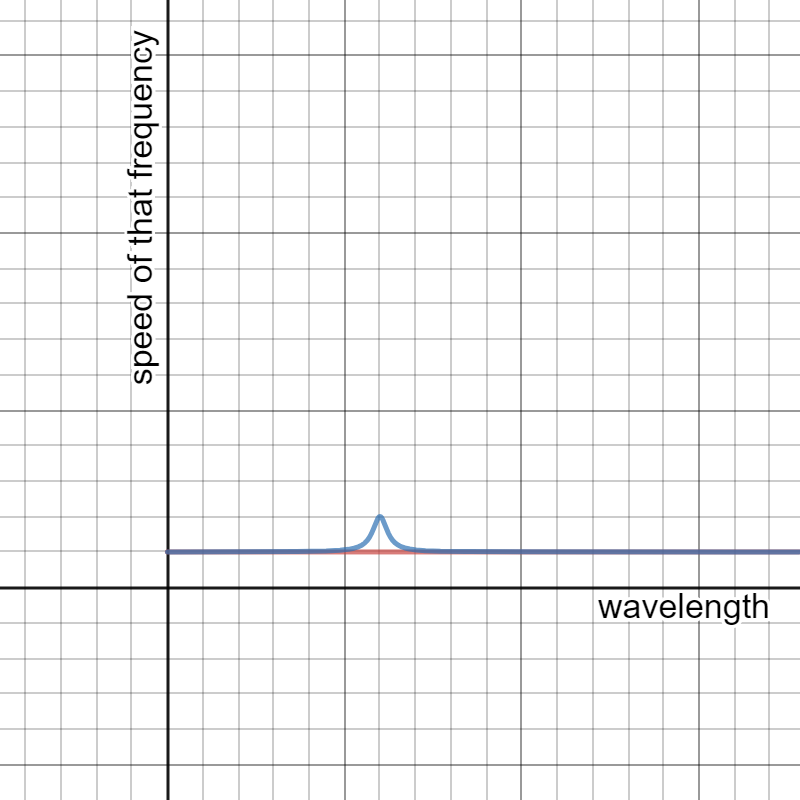 In this case, the variation in speed only occurs at a specific, small range of wavelengths, which is why it hasn't been seen

OK, it's whomping weird, but let's roll with it for a sec...

And you'll get the joke I made momentarily.

In real life, frequency and wavelength are the same thing. Frequency is the number of times a whole wavelength occurs in one second. The relationship, as @Alexander points out in comments, is v = f * λ.

But, let's change the nature of that equation for your world. Let's make λ the constant and let v float. What happens then?

Well... all light has the same wavelength, and therefore the same color (to our eyes). If you throw that fixed number up high enough (I can't use your suggested number, you started by fixing wavelength, then started talking about a fixed frequency. You need to pick one.... I picked wavelength) the color is outside humanity's perception.

Everything would be filled with light and yet be as dark as the deepest cave. Because we'd be functionally blind. That's boring.

But, you'd have "FTL" travel in that you can affix a frequency to the fixed wavelength that would create a value for v > c.

If we assume the fixed wavelength is within human perception, then everything's monochromatic because there's only one wavelength.

But that's not the big issue

The big issue is that photons, and their use in, say, radio transmissions, bend time. Oh, yeah, baby!

Because frequency and wavelength (remember, in real life they're just different ways of looking at the same, single property of light) are no longer related in your world, it's now possible to propagate a single cycle of light in more time... or less time... than it would here on Earth.

Which means the speed of light is negative when frequency (the number of cycles of the wavelength per second) is less than the wavelength!

I love it! You just created radiometric clairvoyance. Of course, you also just screwed up the entire gambling industry. And heaven help whomever has to work out the rules of paradox in your world.

Not the answer you're looking for? Browse other questions tagged communication faster-than-light light .

10
What would happen if the speed of light was fundamentally faster?
26
Realistic 'hacks' that programmer may exploit in a brand new FTL comm system that was not securely written?
8
The Complicated Nature of Photokinesis
67
How to prevent superluminal traveling idiots from wrecking half of the universe?
5
How to build a wormhole for FTL communication? [more Engineering than Physics question]
0
Semi-FTL quantum communications
8
Can we safe FTL from paradoxes by using a Multiverse?
11
A plausible explanation for the "ansible?" - FTL communications
2
What wavelength light is most effective?
47
How long can it really take to calculate a hyperspace jump?