What temperatures would occur several meters below different types of deserts?

What temperatures can one expect 50-150 meters below different types of deserts? The rocks in my campaign heavily feature iron sediments, like in Australia, but since this is a fantasy world I am open to changing types of rocks and environments.

This question is aimed at an underground cave system I am planning for a dungeon crawl.

EDIT: The climate zone is subtropical; as for the rock type, I have absolutely no idea yet. Its altitude ranges between 70m-150m over normal null, while the average temperature varies between 20°C-30°C in winter and 30°C-40°C in summer.

At 15m down, all daily + seasonal fluctuations have nulled out, only longterm values matter. The temperature is the annual average of the AIR temperature of the surface above it. Surface type/color/texture/seasons do not matter.
For example, a black surface rock will bake warmer in the day, yes. But at night that same rock will radiate the heat faster.

Going any deeper, increase the ground temperature by 2.5C per 100m of added depth.
This is due to approaching the hotter interior of the planet, and adding a thicker layer of insulation above.

Exceptions: If the surface is under significant water(more than a shallow pond or marsh), skip the air and use annual average WATER temperature.

If in a region of geothermal activity, add X, where x varies wildly according to local conditions. Obviously, digging at Yellowstone will make for warmer tunnels.

For your query: the type of desert does not matter. Just take the average air temperature(!not! average of hottest per day, you need to average of the temp over the whole day. This will be surprisingly LOW for a desert!)
And add 1.25C - 3.75C

Measured soil temperatures at depth. (this is in Indonesia, but same rules apply for deserts)
(image source: https://www.researchgate.net/figure/Temperature-variation-of-underground-soil-with-depth-for-typical-days-in-Malaysia-15_fig3_256838899) 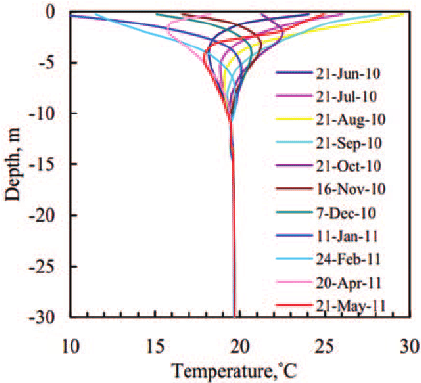 The temperature of a cave is usually the same all year round and based on the average temperature of the year's day-night cycle - it is that perfect average of the whole year, if there are no other factors to heat a cave system, like being particularly deep (mines get hot).

Subtropical deserts have a rapid drop in night temperature, which has to be taken into account. So the daytime temperature is on average 30 °C, but if you take into account the night drop, which falls to freezing temperature, puts the expected underground cave to be a chill 15°C close to the surface.

Not the answer you're looking for? Browse other questions tagged science-based geology deserts or ask your own question.

12
Over what distance would space combat between spacecraft probably occur given physical realities?
5
Would different types of blood (AB-, O+...) have different nutrients for vampires?
5
What is the smallest change that would allow an Earth-like planet to have atmospheric CO₂ levels of several percent?
21
What would cause a region of land to become barren over several decades?
2
What would be helpful for survival in areas with temperatures just below the boiling point?
3
What Other Types of Broadleaves Would Grow in Subarctic Conditions?
14
What would make bones be of different colors?