Can a water transport canal be excavated by water power?

Situation: A very large reservoir of water exists raised up above a large expanse of almost flat land. From the bottom of the reservoir the land falls away at a very gentle gradient of ~1 in 10,000. The output of the water in the high reservoir can be controlled via a series of sluice gates to deliver anywhere between 0 and 1000 cubic meters water flow per second down onto the flat land below.

The people want to build a canal across the flat land to deliver water from the bottom of the reservoir into a river 400km away. Which of the flowing would be the easiest way to do this and what are the likely difficulties?

Would it be better to use a steady or pulsed flow rate?#

The ground is generally loose material such as sand, loam or clay and is mostly homogeneous. The surface is dry but becomes increasingly damp as you dig through it down to the water table. If it makes a big difference describe why it does.

Assume the reservoir is large enough to provide a constant flow of water indefinitely at the flow rate selected at the sluice gates. The water can flow at any desired rate and can be channeled into a deep torrent or a wide shallow stream when it passes through the sluice gates. The foundation of the reservoir will not be undermined (out of scope).

Another way to think of this is given the starting situation can the water dig it's own channel? If so how best to organise the flow to encourage it.

@AlexP's answer was fantastic. I upvoted it. So should you. But there might be an alternative....

Hydraulic mining is a form of mining that uses high-pressure jets of water to dislodge rock material or move sediment. (Source, also image below) 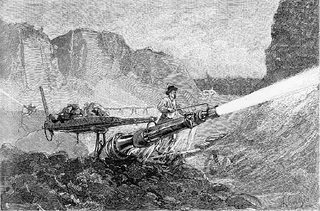 Set up pipes that bring the water to the termination (the sea) such that there's a lot of pressure, then carve out the canal back-to-front, washing (slowly) the sediment out to sea. Depending on the mineral deposits in the area, this method can be combined with placer mining techniques (the use of sluices to extract heavier minerals) to extract those minerals and (from a suspension-of-disbelief perspective) pay for the project.

It just might turn out, given the fact that there is only a 40 meter drop from one end to the other, that the ground is relatively flat and unobstructed, and that you are after a flow of 1000 cubic meters per second, your best option just might be to forget about erroding the channel, forget about digging a pilot channel, in fact forget about a dug channel complterely, and just build a twin 400 km. long 5 m. high dike to channel the water.

With a wide channel, you just might end up moving far less material - the dike walls are no where near the dimensions of the channel.

Water flows because of differences in energy. Potential energy is converted to kinetic energy. The higher the potential energy, the greater the kinetic energy and the resultant flow. Ten tons of water flows through a channel because there was, first and foremost, enough energy applied to that ten tons of water to get it moving (accelerate it). To keep that ten tons of water moving through the friction of 400 km. of channel, you need a combination of a lot of inertia to begin with, and enough energy to overcome friction. A drop of 40 m. in 400 km. is not supplying a lot of potential energy to move ten tons of water through rough, rocky, meandering waterways at 1000 cubic meters per second. The water will just overflow the banks at the head end, and flood out over the plain, until it dissipates into the ground, evaporates, or stagnates in pools.

The smoother, straighter, more frictionless the banks are, the more water can flow in the same dimension of channel.

Roman aquaducts were successful because they were sealed pipes, and thus the water channel could be pressurized. The water could be 'pushed' through the pipes at high source pressure, so the pressure energy could be contained and dissipated much further along the course than just at the source. Try that with a river, and the water just expands under the pressure at the source, dissipating it quickly through flooding.

To get your water across that 400 km. distance, you need to build up a lot of energy at the source, enough to get it the entire distance. Now, to get it to errode, you need to supply enough energy at the source to move the water AND the earth that same 400 km. Rivers do this by using a parabolic shape. Steep at the beginning, shallower at the end. Like a roller coaster track, or a slide. Build up speed coming down the steep slope, build up the energy, then coast. That ten tons of water in a steep drop has now built up enough energy to move both itself AND the ten tons of earth across 400 km. of surface, hopefully. There is going to be very little additional energy added along the way.

You want to START the ten tons of water moving at the TOP of the reservoir, letting it fall down the slope, building up speed. But you do not want it simply crashing into the ground. That is like a one-way trip off a cliff. A big splat on the ground, a big hole, but not much lateral movement. You want a parabolic channel at the bottom. Something that will change the vector. Vertical motion into horizontal motion. You don't want the energy dissipated in one big bang, you want it to carry on downstream.

So you want a lot of engineering at the source. A channel built down the slope of the reservoir, in a parabolic shape. A design that can not be left to chance. Nature seems to prefer the 'splat' option, the waterfalls. Straight down.

Once you get the engineering at the head end, and the engineering to direct the flow at the base in a single direction instead of fanning out, then you can decide if that ten tons of water has enough energy to carry the ten tons of soil, or whatever the mass actually is. If it is more than ten tons, far more energy is needed. If it ls less than ten tons, not as much energy is needed. That is an engineering calculation - how much material needs to be moved, how far it has to be moved, and the energy needed to first accelerate it (inertia) then to overcome friction. We can't know that until the actual material is known, how high the head end is (potetial energy due to gravity), and how much water is moving.

One thing is for sure - in order for the water to reach the river, it needs to be directed. Is there a natural path for the water to follow, or is the land almost flat? The flatter the land, the more the water just wants to spread out, dissipating its energy over a very wide area. In a fan, the area squares as the distance from the source, so the water very quickly loses the ability to carry any material as it moves further out from the source.

If there is no natural straight course, then the water must be 'directed'. Yes, you can do that by digging a pilot channel, but you can also do that by building a dike. Whichever you chose depends on the material you are digging through vs the avaiiability of suitable material for building the dike. If the ground is flat, solid, strong contiguous bedrock, but there is an abundant supply of more granular fill closeby, then building a dike is probably the best option. The land is flat, and so the walls of the dike will be parallel to the ground. Alternately, if the ground is easy to dig into, or you have a prolific source of explosives or power beams, then excavating the channel is probably preferred. It is a lot easier to move a big rock than it is to chip that same rock out of solid rock and then move it.

Now, you have to consider the end. What is this channel flowing into? A river, pool, lake, or ocean? Remember, the surface of this end point is only 40 meters lower than the head end. Tidal forces? Wind-driven waves? Flooding? is it allowable for the water to be pushed back up the channel? How deep is the water flow at the end? If it is a river that is only ten meters deep, obviously the channel can not be more than ten meters deep, or you get the potential for back flow. If it has a shallow shore then the dug channel has to be dug far out from the shore - the deeper the channel, the further out it has to be dug. Is the water flow capable of accepting 1000 cubic meters of water per second, PLUS all of the sediment? Do you need to worry about all of the sediment settling out of the water? Will you end up with one collossal river delta? Or is there enough water movement in the destination to also carry away the sediment?

If you use a dike, instead of digging the channel, the bottom of the water flow (ground levvel) is still above the surface level of the river or such. The channel water flows on TOP of the existing water flow, not INTO it. It does not matter how shallow the shoreline is, the additional water flow can still be added to it.

Not the answer you're looking for? Browse other questions tagged science-based geography construction or ask your own question.

4
How much more effective at digging would an efficient late preindustrial power be compared to basic human labour?

43
How (un)likely is a split of one major river into two others?
65
Ultimate Australian Canal
6
Rivers flowing uphill
37
How to stop a massive canal system from silting up?
18
Ringstadt: How sensible is my topography?
5
Effects of a supermassive ship crash landing on a planet
35
How Would Civilisations on Different Planes of a Cube Planet Interact?
12
What might be the climate inside a “sky abyss” on a tidally locked planet?
6
Converting deserts into more hospitable places by inducing rain through the ocean?
2
Is This Realistic Physical Geography for my World?