How to Represent Platonic Solids in 2D Magic Circle Construction

My world's magic system employs numerous means to cast spells. These include chanting, activation of magic circles, rituals, etc. As the question suggests, my question today is on magic circles.

My world uses typed magic broken down into two categories.

Note that elemental magic only deals with generating or manipulating the elements. For instance, fire magic isn't some abstract generalised form of magic which can absorb kinetic energy or similar. Each elemental magic does only what it says on the box.

Arcane magic on the other hand extends beyond just manipuilating light and shadow, and also deals with concepts such as teleportation, gravity, and other such intangible ideas.

There is no sleep / paralysis / memory manipulation / etc. magic.

All means of casting spells involve 3 components. The only one of which pertinent to the question is the first of the three, seen below.

Relationship Between the Two

I would like each element to be represented by a shape, such that the magic circles for each type of magic are distinguishable from one another. Furthermore, rather than 2D shapes, I would like the true natures of the shapes representing each element to be one of the platonic solids. Ideally, the assignment will be similar to that of Plato, in which the tetrahedron is fire, hexahedron is earth, octahedron is air, and icosahedron is water. I don't mind arcane magic sharing the dodecahedron, but would ideally have a manner for distinguishing one from the other.

Now of course, one can't exactly draw a 3D shape on a 2D plane. As such, I was hoping to use some 2D analogue to represent each of the convex regular polyhedra. (Triangle is tetrahedron, square is hexahedron, etc.)

Note: No magic circle involves text. Solely lines and shapes and always with a circle on the outside. Written text is a symbolic human construct and thus arbitrary. Magic circles only use geometry as a result.

The plan was to represent the tetrahedron, hexahedron, dodecahedron, and icosahedron as a triangle, square, pentagon and hexagon respectively. However, I do not know how I can represent the octahedron. If I take its appearance from a vertex, it looks like a diamond, but there's really no difference between a diamond and square. If I take its appearance from its face, it's a hexagon, but this is the same as the icosahedron.

So my question is, how can my magic circles somehow illustrate the difference between the octahedron and other shapes in 2D, and how can I have both light and dark be represented by a pentagon, but be clearly distinct?

The stereographic projection is a way of mapping a sphere onto a plane, which has the interesting property that any circles on the sphere get mapped to circles on the plane. It preserves angles and (to some extent) shape, although not size. The details aren't particularly relevant here, so I'll leave that Wikipedia link there for anyone who's interested.

It's also possible to use stereographic projection to map polyhedra onto a plane, by first inflating the polyhedra like balloons so that they become spheres. When this is done with the platonic solids, these are the results: 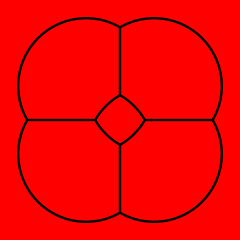 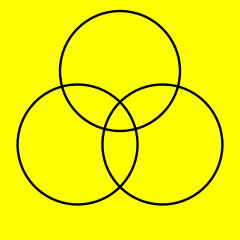 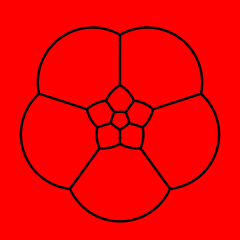 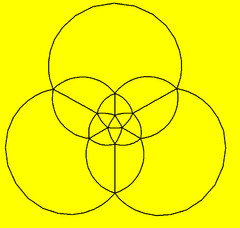 (source for all five images)

I don't know if this design will fit with the sort of aesthetic you're going for, but if it does, well, there you go.

Project a Hamilton Cycle into 2D?

If this is a path in which a wand / sacred pen / blessed knife / etc must follow while casting a spell, perhaps a Hamilton cycle is what you need? That's a path passing through every vertex once and only once, projected into 2D.

So this would be the path of your arcane spell going through the dodecahedron: 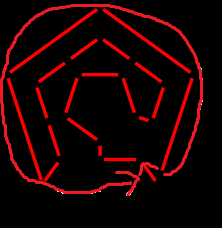 It's literally tracing the 3D shape but projected into 2D, with a circle then added. Eg heres the original 3D path: 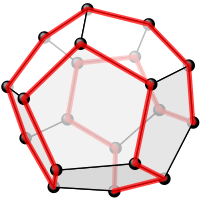 As a bonus for story writing there's multiple possible paths, so you learn it like a signature. If done with a wand, each mage will have a unique gesture for casting it. It's also slightly obfuscated, so if printed out, the uninitiated may not recognise its significance.

The more complex ones have an inside face, an outside face, and bordering faces where separate, powerful wards can be placed. Mages sit in in the center triange of the octahedron, there are three inner and three outer border triangles to burn incense or whatever, and observers sit in the outermost, infinite face.

(If you do the count, the area outside the outermost boundaries is one face of the 3d object, too).

Either the tetrahedron is not really suitable, or it is used for invocations with two or three subjects -- to summon a demon, stand in one face and summon it in another, and there is a magical barrier between you.

You mentioned that you were worried that a diamond is not distinct enough from a square. I beg to differ. A rhombus (a diamond laid over on its side) has a short and a long axis between its verticies. A square tipped up on a vertex has two identical axes between the vertices.

You may not think it's ideal, but people can easily recognize the difference between the two. (Images care of Geometryhelp.net.) 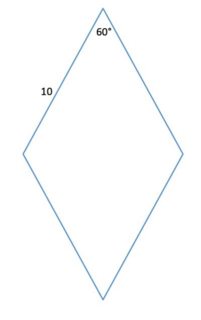 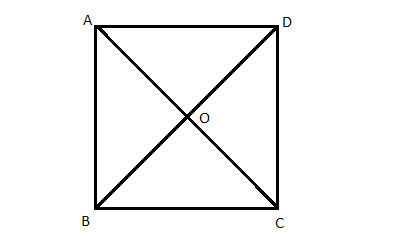 7
How could a channeling spell be useful during battle?
0
Magic of the Three Gods (Fire, Lightning, Ice)
7
How can I track the use of illegal magic?
5
How can having multiple casters for a spell create excess heat?
5
Elemental magic - which is strong against which?
2
how could a nature spell need to remain constantly active?
5
Impact of Sages on Medieval Society
5
Geometric magic in the wild