What could cause a race to evolve with their limbs' primary functions reversed?

I'm trying to determine the evolutionary viability of a sentient race with "reversed" function of front and back limbs. Their front limbs would be used as legs primarily, and their back limbs for fine motoric movement and object manipulation.

Art from the Monsters Inc. universe.

As per the examples, they would be built as follows:

I wonder if these type of creatures could evolve into sentience and how how their race could survive in the first place. Also which kind of environment would allow (or even force) them to favour their back/lower limbs as primary motoric appendages, and their front limbs as their main transport ones.

In case of doubt, assume earth-like conditions where possible for ease of answering. With similar kinds of vegetation, resource availability and predation by hostile species.

I certainly have my own theories and will self-answer in time, but I would like to hear your thoughts for a more complete picture.

I think if you're working with a completely alien ecosystem, you can get away with whatever you want, and, given we only have the single reference point, it's almost not worth speculating.

So I'll shift the focus a bit to the nearest situation I can think of on Earth: birds. Flighted birds use their forelimbs for locomotion (in a sense...) and their rear limbs (in some cases as least) for fine object manipulation.

So, in terms of ending up with something like a Star Wars Dug with a contemporary terrestrial starting point, I can imagine a situation where a bird population become isolated on an island habitat with no native predators, and, in common with a lot of real bird species in this situation, undergo insular gigantism and lose their capacity for flight. However, unlike a lot of existing flightless birds, whose wings tend to atrophy away over time, becoming more fully bipedal, this bird species begins to re-evolve a form of quadrupedal locomotion.

At first this is very clumsy, perhaps the birds shift some weight onto their "elbow" joints to allow them to keep a low profile, to sneak up on prey in tall grass, but over many generations, the wing starts become something much more like a leg. However, while birds typically have quite pronounced digits on their back limbs, the anatomy of the wing has the fourth and fifth digits completely atrophied away, and the first, second and third fused into a single wing bone. As a general rule of thumb, evolution seems to find it a lot easier to lose or fuse digits than it does to regain or de-fuse them, so the "foot" at the end of the forelimb is likely going to stay a much more simple structure than the foot on the back limbs. Perhaps the feathers will adapt or fuse in some way to create something along the lines of a horse-like single-toed hoof.

Fast forward a few million years, and a change of environment has pushed this lineage into a more arboreal setting. The front hoof has evolved into a hook for ease of climbing, but when this creature needs to use fine motor movements to peel a banana or deshell a nut it uses the bird-like talons on the end of its back legs.

Let's then say, further in the future, this little bird-monkey faces the same evolutionary pressures our own ancestors did, and is forced out of the trees and onto the open plain, and the same incentives for upright bipedalism apply. At this point, the wing-leg-hook-things begin to lengthen and strengthen, and the creature adopts a posture at first somewhat similar to great ape knuckle-walking, and then may eventually begin to keep its whole back half of its body lifted off the floor altogether, and carry its weight just on its "arms", and there you have it.

But, to go back to a completely alien environment, I think my only advice would be to acknowledge that the forelimbs really are the obvious default choice for throwing, carrying, manipulating, and all these sorts of fine movements, because it's easier to balance the weight on the back legs, the front limbs are closer to the face so easier to visually co-ordinate with, and so on, and so if you want to swap it around, make sure to have a good historical reason why the obvious benefits of the forelimbs won't apply to your alien.

They are called birds. 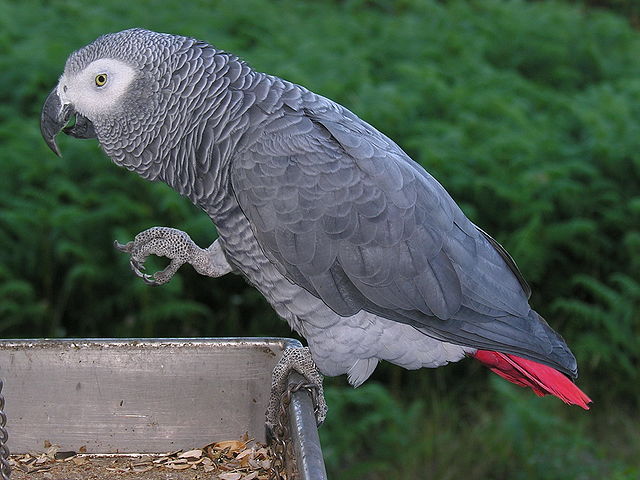 A grey parrot (Psittacus erithacus) demonstrating the versatility of its hind limbs. Photograph by L. Miguel Bugallo Sánchez, available on Wikimedia under the GNU Free Documentation License, version 1.2 or later.

But the question is fundamentally wrong

The question shows a severe misunderstanding of how natural evolution works.

This is because natural evolution is blind. It doesn't know what it is doing. It has no goal, other than trying to maximize the number of viable offspring produced by a population; and even in this limited goal, natural evolution cannot see beyond the immediate horizon.

So that nobody can say "which kind" of environment would lead to a bird-like situation, where the front limbs are specialized for locomotion and any object manipulation has to be performed with the hind limbs: all we can say is that at a certain point in the evolutionary history of the species the front limbs became specialized for locomotion (as did the wings of birds), and were thus unavailable to develop fine motor skills. If and when the species will develop fine motor skills it will have to be their hind limbs which acquire them -- exactly as parrots demostrate.

Not the answer you're looking for? Browse other questions tagged creature-design evolution fantasy-races .

4
Why would the front appendages be for locomotion?

5
What would cause a ground-dwelling race to evolve for flight?
7
What practical forms can a "branch-tailed" organism have?
4
Is this humanoid dragon realistic the way I’ve imagined it?
13
Body plan of a 4D human-analog?
4
Increased flexibility for dragons?
6
Bee-like vertebrate flight surface
3
How make look feminine and masculine (non mammalian) animal humanoids?