What is the smallest a planet can be whilst retaining a Venus-like atmosphere?

I am designing a science fiction world that involves the speculative evolution of large flying bat-like organisms with intelligence who are blind as their planet has an atmosphere like Venus, or at least to the extent that it blocks out light.

I've heard that flight does not support large brains, so I reasoned that low-gravity + high-density atmospheres could support both. Is this a reasonable assumption, and if so, how low could the gravity get before a very dense atmosphere simply dissipates into space?

If you look at this chart which is a staple of worldbuilding, you can see what is the relationship between a planet escape velocity, its temperature and the type of gases which it can trap for a reasonably long period of time. 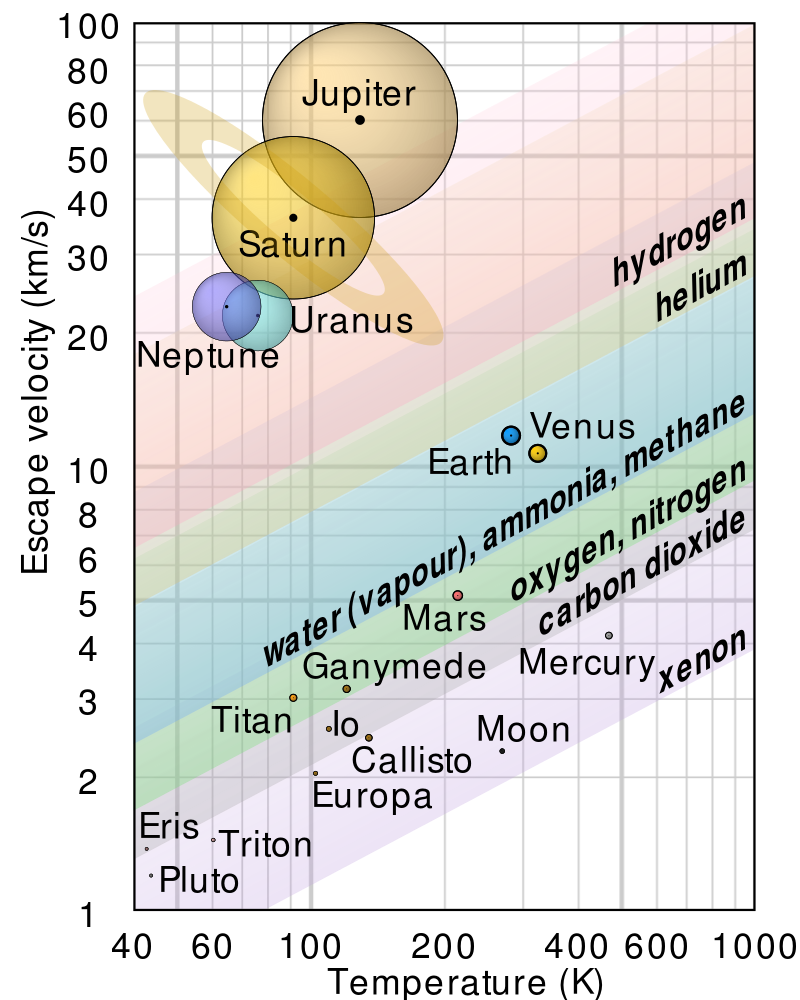 In principle a body as small as Io can keep an atmosphere similar to that of Venus, but it would need to be at a temperature so low (around 40K) that no life would be possible.

Since you want to have life on the planet, it means you want temperatures where water is liquid. Therefore you are pretty much stuck with something similar to Earth or Venus.

As supporting info to the above statement, check the pertinent What If

When it comes to flying, Titan might be better than Earth. Its atmosphere is thick but its gravity is light, giving it a surface pressure only 50% higher than Earth’s with air four times as dense. Its gravity—lower than that of the Moon—means that flying is easy. Our Cessna could get into the air under pedal power.

In fact, humans on Titan could fly by muscle power. A human in a hang glider could comfortably take off and cruise around powered by oversized swim-flipper boots—or even take off by flapping artificial wings. The power requirements are minimal—it would probably take no more effort than walking.

The downside (there’s always a downside) is the cold. It’s 72 kelvin on Titan, which is about the temperature of liquid nitrogen.

Part One of Two: A More Flight Friendly Planet.

When it come to questions of habitability, who are you gonna check?

There are many scientific discussions about the habitablity of planets for carbon based, liquid water using lifeforms, with basic biochemistry similar to that of Earth lifeforms. But there is only one scientific discussion that I know of about the more restricted problem of the habitability of planets for human beings, or for large bodied multi celled oxygen breathing animals having similar environmental requirements to human beings.

Any writer who ever expects or desires to write a story set on a planet habitable for humans, or habitable for lifeforms with similar requirements, should study it.

In Chapter 4 The Astronomical Parameters, section Planetary properties, Dole discusses the possible mass range of habitable planets. On page 53 he states that the planet should have a surface gravity of less than 1.5 g, corresponding to a mass of 2.35 earth, and a radius of 1.25 Earth radius (7,988.75 kilometers), and an escape velocity of 15.3 kilometers per second. Note such a planet would have 1.5 times the surface gravity of Earth and 1.36 times the escape velocity.

But Dole believe such a planet would be too small to produce a dense, oxygen rich atmosphere. In the next few pages Dole estimated two separate minimum masses for a planet which could produce a dense, oxygen rich atmosphere, 0.25 Earth mass and 0.57 Earth mass. And Dole decided that the true value would be somewhere between them, somewhere about 0.4 Earth mass, corresponding to a planet with a radius of 0.78 Earth radius (4,969.38 kilometers) and a surface gravity of 0.68 g. According to my rough calculations such a planet would have a escape velocity of about 8.01 meters per second, or about 0.71 that of Earth.

Note that the more massive an Earth like planet is, the more its gravity will compress its materials and increase the average density of the planet. As a result, Dole's example of a planet more massive than Earth has 1.5 times the surface gravity of Earth and 1.36 times the escape velocity.

Thus a writer desiring to make flying as easy as possible on a habitable planet should choose a planet with a lower mass than Earth, so that the escape velocity to retain an atmosphere will be higher relative to the surface gravity.

Or maybe advanced aliens terraformed that small planet, producing a dense and oxygen rich atmosphere, some time in the past. I note that the planet's atmosphere is desired to be dense and opaque enough to block most sunlight from reaching the surface, and thus there shouldn't be photosynthesis to produce an oxygen atmosphere, so either some little understood natural process, or photosynthesis by tiny organisms floating high in the atmopshere, or terraforming by an advanced civilization in the past, would seem to be necessary to produce the oxygen that large flying lifeforms would probably need.

You might even possibly have a dense oxygen nitrogen atmosphere on a planet that is smaller than Dole's minimum size to retain an oxygen atmosphere. That small planet would have to orbit outside what is usually considered the habitable zone of its star. The amount of light it gets from its star is insufficient to keep the surface warm enough for life, and so the root-mean-square velocity of atomic oxygen in the outer layer of the atmosphere will also be much lower than Earth's, enabling the planet to retain its oxygen.

The planet's surface would need to be warmed by internal heat. Possibly the planet is actually a giant exomoon of a giant exoplanet and tidal heating produces the internal heat necessary for life. And the oxygen in the atmosphere would presumably have been artifically produced by terraforming by an advanced civilization.

Maybe it wouldn't be necessary to have an atmosphere much denser than Earth's to have flying beings large enough to be as inelligent as humans. The OP wants a dense atmosphere to make flying easier for large beings and to make the surface dark so the natives are blind and use ecolocation instead.

But even the Venerean atmosphere isn't thick and opaque enough to make the surface pitch black.

If the light level at the Venerean surface is comprable to an overcast day on Earth, Earth lifeforms can see fine in such light levels and even much lower light levels.

Could beings large enough to be intelligent be able to fly in an atmosphere no denser than Earth's?

Thus it is possible that unbaised extraterrestrial observers might decide that one or more or possibly all of those hundred species should be considered to be, like Homo sapiens, partially or even fully intelligent.

Of course none of those species fly naturally.

One of the largest extinct flying reptiles known, Quetzalcoatlus northropi, had a wingspan of 10 to 11 meters (33 to 36 feet).

Weight estimates for giant azhdarchids are extremely problematic because no existing species share a similar size or body plan, and in consequence, published results vary widely.2 Generalized weight, based on some studies that have historically found extremely low weight estimates for Quetzalcoatlus, was as low as 70 kg (150 lb) for a 10 m (32 ft 10 in) individual. A majority of estimates published since the 2000s have been substantially higher, around 200–250 kg (440–550 lb).[11][12]

An atmosphere several times as dense as Earth's, and lower gravity than Earth's, are not absolutely necessary for flying beings to have human sized brains and human intelligence levels.

Some groups of birds, such as crows and parrots, display anomolously high levels of intelligence, considering that that their entire bodies only wigh a few kilograms or pounds, and their brains weigh only tiny fractions of their total body weight.

Thus it could be hypothosized that because flying creatures like birds need to minimize weight, at least some birds have evolved highly efficient brains that work much more efficiently than mammal brains. So it is conceivable that a bird brain a fraction the size of a human brain could produce human levels of intelligence.

And the pressure to maximize the weight efficiency of organs, including brains, of flying creatures might also operate on an alien planet. Thus some flying creatures on alien planets might be far more intelligent than the size of their brains relative to Earth mammal brains would indicate, and intelligent flying beings might be be significantly smaller than humans in total mass and in brain mass.

This might make it easier for flying beings to attain human intelligence levels on a planet similar to Earth, and maybe even easier to do so on a planet where conditions make flying much easier than on Earth.

7
Artificial atmosphere bubble around a planet?
3
What are the limits on increasing atmospheric pressure on an ammonia planet to get liquid ammonia?

17
What can we do to Mars to give it a survivable atmosphere?
11
What are the requirements for an atmosphere retaining moon with a stable orbit around an Earth-like planet with non-destructive tidal forces?
10
Giving a Planet Sunburn
5
Surviving the atmosphere of Venus
7
Is this circumbinary planet set up in a stable manner?
19
A character steps outside in the upper atmosphere of Venus- how sunburned is he?
4
How does composition change if you extend an Earthlike atmosphere 50km below sea level?
5
What is the most damage/destruction I can do to Venus by redirecting sunlight?
8
I am entering Venus atmosphere in only a space suit. Can I survive?
6
What would be the consequences of an Earthlike Planet retaining helium in its atmosphere