How to tell bird people apart when their visual differences are more subtle?

One problem that fantasy suffers from is that it is hard for human viewers to differentiate between actual non-humans when the differences are subtle. I'm not talking about dwarves and elves, but dragons, lizardfolk, and bird people.

Most of us already have trouble distinguishing one Asian from another, and both bird people and dragons have the problem of having a more "precise" build. They're large fliers, so they are all gonna have the same body types, weight, etc...

For now, let's focus on bird people. They are six-limbed (wings are separate from the arms), but otherwise humanoid creatures, capable of powered flight. They have many avian features like talons and plumage that cover most of their body, especially their head which looks like an upscaled head of a bird (their eyes are always forward-facing, though).

While there are ways to get around it in text, you're kinda screwed when it comes to visual guides where you'd have to differentiate between bird people who are the same age, sex, and both belong to the common raven subspecies.

Since they have similar characteristics to birds, we should look for ways to tell IRL crows apart and then apply them to bird people. But what could those "ways" be?

How do bird people tell each other apart?

Same way we do.

You mentioned in your question that asians can't be told apart. Asians can tell each other apart because they're familiar with the depth and breadth of Asian facial structure. White westerners will need to meet a few asians before they learn how to tell them apart.

This is the cross race effect and can be mitigated with awareness, exposure to other races, and practice. Not being aware of this effect has serious consequences for criminal trials - multiple white eyewitness will identify the wrong black man, and be certain of their identification until DNA exonerates them.

How does the audience tell them apart?

If you're an exceptional animator - how they move. Otherwise clothing.

I was really short sighted as a child, but didn't get glasses until my mid 20s. I could barely see peoples faces. Also, I went to a private school with everyone white skinned and in an identical uniform so everyone was the same blurry collection of colours. How could I tell people apart? How clothing was worn - eg how tight or loose clothing is and how it moved relative to then, body shapes, how their body moved as they moved, their movement style, their pace, how they sat, and posture in general.

Even though the people of a species may be very visually similar in a lot of ways, there are going to be differences. You just need to decide what those are. It doesn't matter what species you look at in real life, be it birds, cats, fish, mice etc., no individual is perfectly identical to another. What the differences are can differ depending on which individual you compare to which. For example, any pet owner can easily tell apart their beloved pets, even if said pets are siblings of the same color and so on. I've had litters of kittens with, for example, multiple grey tabbies, but as they grow up they quickly become unique. Maybe one has slightly darker stripes, or one is a bit more filled out than another, or one has a slightly different shade of eyes or slightly shorter legs, or even just a different way of walking or a different sounding meow. In humans, take identical twins. It may be hard to distinguish between them when you first meet them, but usually anyone who knows them well can tell them apart with little trouble.

As the author, you decide what the traits of your bird people are. What traits of what types of bird they have, and what more humanoid traits they have, is all up to you. It's hard to give exact suggestions without knowing all this, but essentially: you get to pick what those small details are that set one person apart from another. Maybe their feathers come in different colors or patterns or length or shininess. Maybe some are smaller than others. Maybe they have varied eye colors. Maybe, as in real life situations where individuals are very visually similar, it's just a matter of how well you know them, and you can recognize the sound of their voice, the way they move, their style of dress (do they wear clothes? often graphic artists will use clothing and other context clues to help the reader distinguish between similar non-human characters), and other mannerisms/traits that make them unique to those who are familiar.

Edit: You comment that due to restrictions in anatomy for flight etc. there is less room for differences in body type, but that doesn't mean there aren't any at all. Look at real birds. Two pigeons hopping around in a park: pigeon number one is large and round (eaten too many bread crumbs!), whereas pigeon number two is smaller and very trim. There will always be some size differences (individuals who are slightly smaller or larger, often most obvious between the sexes) and weight differences (someone has been eating more or is more likely to gain weight than another) and build differences (even with the limitations for allowing flight etc., this would be the case. In real life this happens in animals as well as people, including birds. I have two male cats, both are well fed and muscular and even weigh about the same, but one is long and lean and the other looks more compact and buff). Age and sex can be a large factor in these differences, but they apply even among those with the same demographics.

The same way one tells apart other similar-looking but not identical beings.

Familiarize yourself with them!

If you "have trouble distinguishing one Asian from another", then 99.9% of the time that just means you have insufficient frequent contact with Asians. The remaining 0.1% of functional brain damage preventing recognition is not relevant to this discussion.

Every single member of a species varies a bit in appearance. Some differences are blatantly obvious, some are more subtle. What you are encountering is a cultural bias, where you have gotten used to differentiating between members of your own culture by looking at those aspects that vary the most. Hair and eye color, for example. In your example, Asians have much less average differentiation in hair color, so you are "blind" to the differences. Instead, look to differing facial proportions, and eye angle, and mouth width, and philtrum height, and, and, and... They DO have differences, and the differences are fully obvious to them, because they are used to looking for them.

The same would apply to your Bird People. They would look to exact color of the neck, and how male plumage is boring black#17 but female plumage is a glorious black#22, and ratio of plumage between third and fourth remiges, or the silhouette of the tail's rectrices as seen from above, or how Jimmy always has a bald spot on his left cranial crest, because he leans against his perch when sleeping, or how his nestbrother Timmy has that nervous tick in his right claw-arm, etc.

Besides, they are civilized. And everyone knows that Jimmy is the one with the neon purple iPod, while Jimmy prefers the oldfashioned Yellow Walkman with the shoulder-mounted boomspeakers.

So... a lot of the existing answers seem to focus on how all differences are subtle unless you know where to look, in which case you can tell. While this is true, you (OP) also said:

While there are ways to get around it in text, you're kinda screwed when it comes to visual guides

...which sounds to me like what you really want is a way to let your audience tell them apart.

In that case, I suggest making them piebald. This will let you give different individuals distinctive patterns. Maybe one has patches on the tips of his wings, another has a distinctive stripe down her forehead, and so forth.

"But they're ravens!" I hear you crying. "They're supposed to be all black!" Well... make them different shades of "black". Piebald doesn't have to be black and white, just two colors that the audience can tell apart. You can explain that in-universe the difference is actually very subtle, while rendering it less so for the audience's benefit. Creators employ such fakery for the audience's benefit all the time... such as rendering all speech in English, even though it's really French, or Betelgeusian, or Y&$*@@'@.

Alternatively, perhaps feather dying is popular. Unlike clothing, this has the advantage that it doesn't interfere with flight, and is likely to remain consistent for a particular individual rather than changing day by day or depending on the weather or whatnot.

As for telling apart males and females, the easiest way is probably to make males tend to be stocky while females tend to be thin (lithe, not necessarily scrawny). This could be especially obvious in the legs, where you can get away with exaggerating the difference.

You are making a problem out of a non-issue

First crows and raven vary by quite a lot. You can easily justify such differences in your species for the same reason there is variation in humans large populations migrating over the the earths surface and differentiating becasue of environmental variation and population isolation, because that is essentially what happen in BOTH cases. 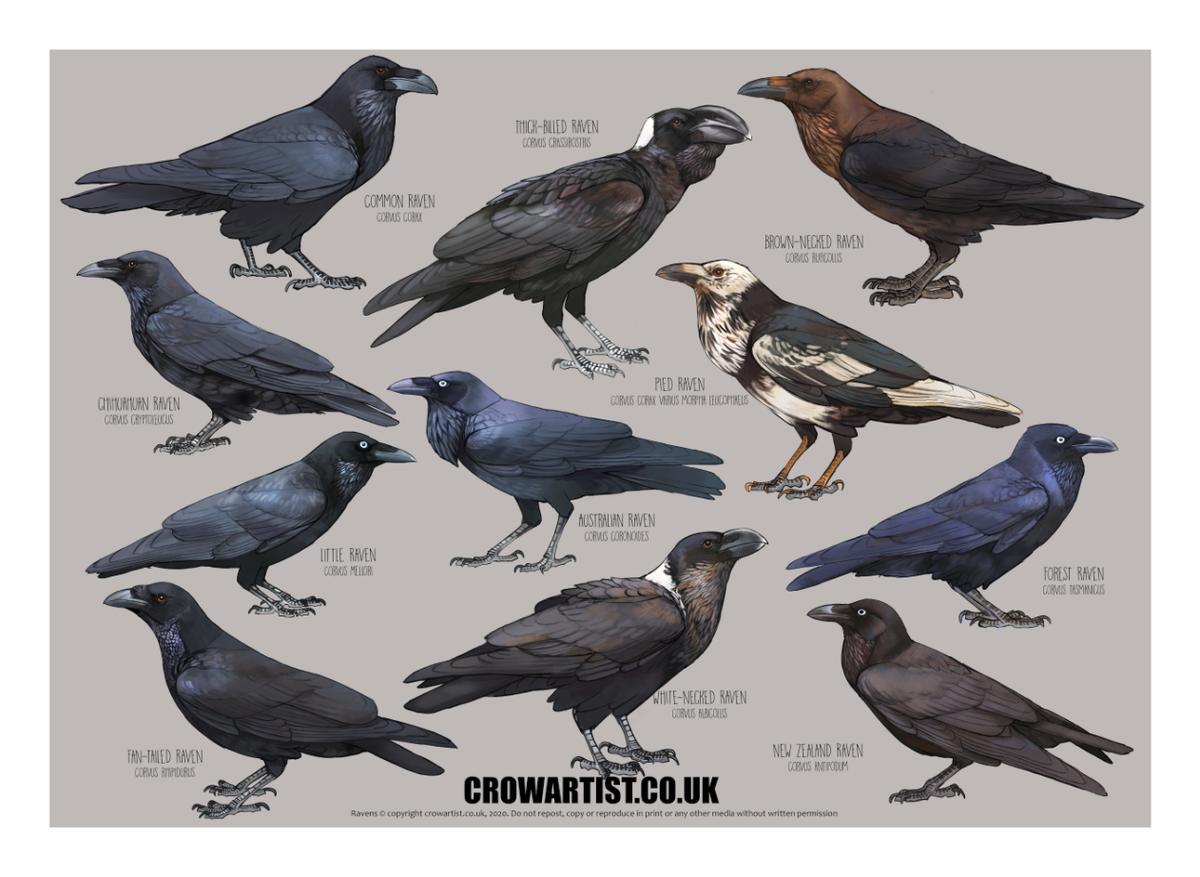 Second things like: build, body size, head and neck tufts, brstiles, and color pattern (some visual to us some only to birds) all vary in corvids even within the same sub-species. You can't spot them becasue you are unfamiliar with corvids. I recommend familiarizing yourself with basic bird description terms, words like: bristles( Rictal bristles), crown, and crest will be your friends. You will need to invent words for ultraviolet based colors or just use human colors and mention it is artistic license to make it understandable.

Lastly you can invent differences, humans look markedly different from chimpanzees, one (among many) reason for this is adaptations to make visual identification of intention and mood easier.

Not the answer you're looking for? Browse other questions tagged science-based creature-design avian appearance .

10
Are talons and beak good enough for advanced manipulation?
4
How would medieval people go about slaying gryphons?
18
Lizardfolk and the problem of balance and anatomically sound tails
5
The most suitable martial art for birdpeople?
4
Adapting ostrich legs for climbing
8
Humanoid avians with six limbs, how to modify their bodyplan so that their ribcage won't constrain certain movements?
4
Would reducing drag be a good reasons for bird people not to wear much besides a loincloth when in civil?
4
Humanoids with wings, how do they take off?
1
Dragons are supposed to have a "smart" breath weapon. How could that work?
0
Pragmatic Plague Doctors Mask