How do I waterproof paper armor?

So, a little while back I suggested Chinese-style paper armor as answer to this question. While it was well liked, a couple people mentioned that in the MythBusters test it didn't hold up very well when it got wet (translation: it slowly disintegrated).

With that in mind, what are some Song-dynasty appropriate ways to waterproof a set of paper armor without making it ponderously heavy?

Use the same method the Chinese used to protect leather armor

That quote refers to armor from the Han dynasty, a thousand years earlier than the Five Dynasties and Ten Kingdoms period when paper armor was invented (907-960 A.D.). Lacquer was an incredibly important part of Chinese life, technology, and economy and it would be very natural to coat the paper in it.

In reference to your statement that MythBusters said the paper didn't hold up well when wet, we have the following:

Later Ming texts provide descriptions of paper armour. One version was made of silk paper and functioned as a gambeson, worn under other armour or by itself. Silk paper could also be used for arm guards. Another version used thicker, more flexible paper, hammered soft, and fastened with studs. It's said that this type of paper armour performed better when soaked with water. (Source, emphasis added)

If that reference can be believed, it might be that MythBusters didn't use the same armor-making methods the ancient Chinese did. Or, perhaps more likely, they made the assumption that the armor was expected to last beyond one battle. The whole point of paper armor is that it's cheap and fast to make.

Which might be the reason it wasn't lacquered historically. What's the point of making something last that isn't designed to last in the first place?

When I was a kid and used to make paper boats by folding A4 sheets, I found out that scribbling one side with crayons would make them float quite longer in the fountain.

As a bonus it would allow for having fancily decorated armors.

I suspect that there is not one answer to this question as paper was used over a long period of time and would have gone through several changes. Evidence for this is paper thin (pun intended) and lot just circle back to the mythbusters episode, but I have managed to find a couple of sources that give some indication of how it might have been done. From this I have two methods that seem to be confirmed via historic sources and I have an unsupported idea from my own supposition.

The first of these is waterproofing using lacquer (a la JBH's answer) and resin. One of the things I found was that Korean paper armour was considered to be particularly fine, and was a common import/tribute, so looking for Korean Paper Armour I managed to find this:

It references a report on the materials required to make 120 sets of paper armour and works out there is roughly five litres of varnish and one of lacquer (which lines up with what what JBH has suggested). In the same article though it notes that even with this mould and mildew was a persistent problem that was inspected for.

The second is cloth. In this source:

There are a lot of references to the armour being constructed of alternating layers of of cloth and paper, essentially creating a gambeson with paper additions. In this situation the waterproofing, or more likely stabilisation of the paper when wet, would have been provided by the cloth layers, potentially with whatever waterproofing methods were using on cloth at the time.

Of these it looks like cloth settled on being the preferred option as the sources indicate that is was still around in the 19th century to be tested against western firearms. However this might not indicate effectiveness of waterproofing (or defence) rather good enough performance combined with ease of manufacture.

My own supposition is that are that there were designs that were inherently waterproof, though from different methods. This is my own supposition, from a couple of unsupported lines I read while finding the sources I have cited, so take these ideas with a grain of salt.

The first of the two was that paper armour was something akin to Geek linothorax (https://en.wikipedia.org/wiki/Linothorax), essentially impregnated with glue before being layers upon layers being being stuck together and finally beaten to restore the paper's flexibility. In this method the glue becomes the waterproofing.

The other one is that we are thinking of the wrong sort of paper. A couple of places on the net indicate that barkcloth, a material made from beating parts of bark into sheets. Others, however, reject this as it as primary sources use different terms for paper and backcloth (https://greatmingmilitary.blogspot.com/2015/02/paper-armour-of-ming-dynasty.html). Even if it was true paper that was used we could be looking at a type of cloth based paper like that used in US currency which holds up fairly well to being wet, although it's not great for it. 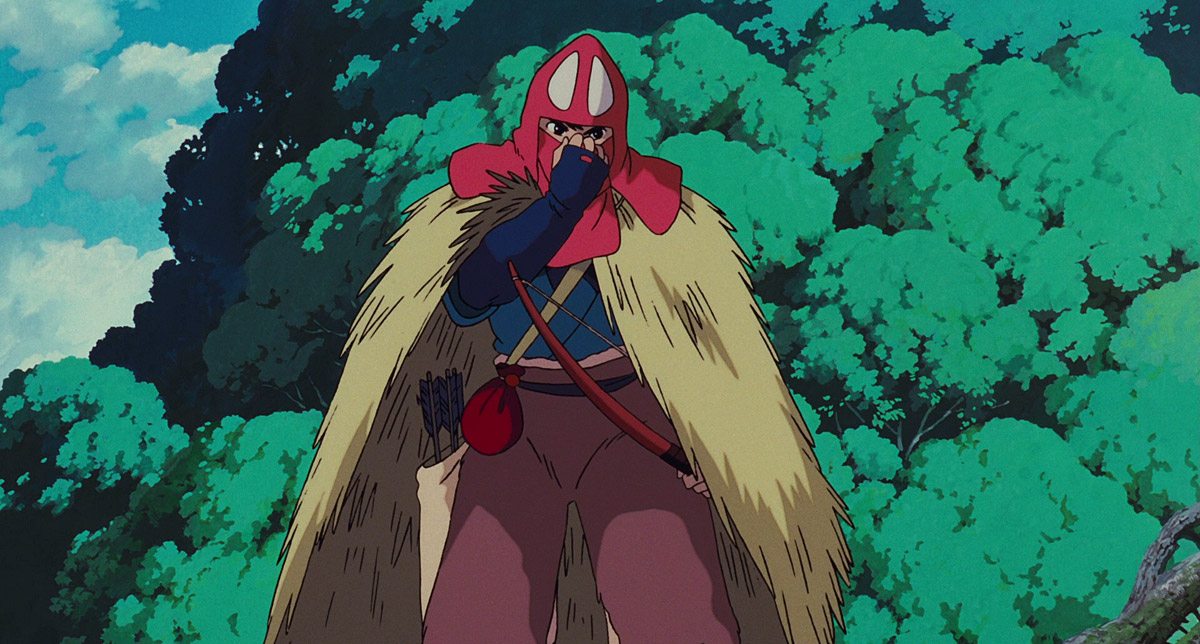 A mino is a Japanese straw cape, as worn by Prince Ashitaka from Mononoke Hime above.

Rice straw has water repellent properties. Raindrops striking a mat of straw will tend to flow along the fibers of the mat, rather than penetrate underneath it.

Your armor is made in a way to emulate straw. Long strips of paper are folded on themselves and pressed, or perhaps rolled very tightly until they are like straws, or perhaps pine needles. The strips are arrayed in an overlapping fashion on the outside of the armor to shed water before it can soak in.

Not the answer you're looking for? Browse other questions tagged medieval armors .

16
How would metal cloth affect armor design?
36
Is diamond armor better than traditional armor?
22
How would aluminum work as medieval armor?
5
How can armor be made with medieval materials be capable of resisting magical fire and lightning?
3
Armor For A Giant
16
Armor for wings
31
How to make female breast armor viable?
3
Armor for a pyrokinetic
5
How feasible is armor composed of micarta?