How would cats navigate oceans?

So, these are the same cats detailed in previous questions. Intelligence is equivalent to 'human in cat bodies', they have mildly opposable thumbs, they can be bipedal temporarily (Think like bears or rabbits), and have a technology level summed up by lacking tools for the most part, but having basic transportation, vague domestication, some mild agriculture, and navigation good enough to traverse to entirely different continents. So, a bit above primitive in some places.

I decided that due to them not being able to create things such as compasses, they'd use the stars and sun to navigate, although I am not positive if they would be able to see stars, or at least well enough to use them for navigation. To cross oceans, they'd rely on ocean currents, due to lacking sails, and simply drift across the world. They also have their own maps, so I assume someone would have made a map of ocean currents after enough trial and error as well as collaboration with other explorers.

But, would this actually work? The boats can only hold one cat and some supplies, maybe two if the cats are small and/or lightweight. They are essentially canoes. I also didn't plan on them using oars, but if that is required, I'd be fine with having them use them. And, anything along the lines of 'they can't since they'd get tired' or 'they can't without oars' should be excused. I can easily change their energy limits since it isn't vital to the story, and I have explicitly stated that I would be fine with letting them use them.

Most felines are nocturnal hunters, their eyes are better adapted to see in low light conditions than human eyes are; so, seeing the stars will not be an issue. While cats are often cited as being near-sighted, this is mostly a consequence of the the reflective tapetum lucidum behind their retinas. Animals with this adaptation get blurred vision during the daytime kind of like having astigmatism, but between this structure and the incredible number of rod receptors they have, cats have a minimum-light-detection threshold about seven times better than that of humans. Even if they are rather nearsighted on top of this, the difference in light reception would hugely make up for it when looking at something like a night sky. While humans with farsight can see tiny sharp dots in the sky, your cats would most likely instead see large glowing spots:

As for propulsion, you will need to give them something other than currents for navigation to be a thing. Many stone aged civilizations had canoes with oars. Since oars are simpler to construct than the boat itself, it stands to reason that they would have them even if they do not have the textile skills for making sails.

There is also historical context for stone aged humans using sail-less canoes to migrate around the Pacific Ocean; so, there would not be any serious believability issues with your felines being able to do it too. Stone aged Polynesians are well known for having traveled great distances in their outrigger canoes. While they did not have sails, the out-rig made the boat stable enough that it would not easily flip from large Ocean waves. Even smaller cat sized outriggers would be able to traverse the Oceans because their design allows them to maintain a center of gravity inside of its points of buoyancy. Instead of plowing through waves like a larger vessel, outriggers are designed to ride up and down them without tipping over in a way that makes their small size inconsequential. 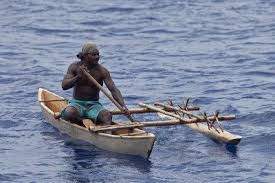 As for supplies, your cats actually have 1 huge advantage over human sailors. A healthy cat can survive for long periods of time off of seawater. Feline kidneys are much better than human ones when it comes to filtering out excess salt in their diet; so, they can go for long periods of time off of just salt water without dehydrating. When you combine this with an ability to fish, your cats need nothing more than their fishing gear in the canoe with them to survive a fairly long journey.

Travelling seas can be split into three problems - propulsion, navigation, and supplies.

Propulsion is going to be tricky. You have no sails, and prefer not to use oars. However your cats could discover that a rudder can travel at an angle to the currents. This can allow you some control of your travels - you wont be able to travel upstream (sailboats can travel upwind - allowing a sail and your cats can travel anywhere.).

Your cats will need a good stockpile of water, or a solar desalinator, I can imagine them being great at fishing, and most but probably not all water needs can be supplied by fishing

A cat who sets out to sea in a boat that cannot be steered is not going anywhere in particular except out to sea. Such a cat is going on a mystic voyage. It will be separate from the land and the world of smells and fleas and things of the cat worlds. It will live on fish it catches with its claws and rainwater. It will have the boat, and sea, and sky, and itself.

The cat might be out there for a year, or more. It will have visions. Strange entities will visit it. If it winds up back home, or on another continent, that is what the journey was meant to bring.

Some cats live out there on the ocean, blind from cataracts and fur bleached platinum blond. They are like hermits of old. They might be sought out by those who wish to know what they have learned.

If such a cat arrives on your shore, be aware: these are not your typical cats.

Not the answer you're looking for? Browse other questions tagged ocean navigation exploration or ask your own question.

9
Could cats sustain themselves in caves?
5
How would a civilization of cave-dwelling cats track dates?
6
How would quadrupeds dance?
3
Most overall likely culture for cats living in caves?

13
Would it be possible for a city floating on water to exist?
14
How to navigate without magnetism?
8
How to navigate the hyperbolic world
1
Extrapolating from the GPS network for time travel
14
Towers in the ocean; How deep can they be built?
27
Without modern electronics, how could you determine your longitude, latitude, and altitude while lost deep underground?
12
Figuring out the Cosmic Compass (Updated)
25
Why would a compass not work in my world?
6
When is the latest a population of merfolk could have inhabited Zealandia without humans getting conclusive proof of their existence?
3
How do you navigate on a cylindrical world?