So, after finding the answer to why not all fissile material is used in a nuclear fission bomb (being blown in multiple directions), I thought that to solve this, the blast should be more focused and unidirectional, where fission fragments cannot scatter all over the place from the blast. Coincidentally, two 3rd Generation Nuclear Weapons sought to solve this issue: Casaba Howitzers (aka Project Orion) and Nuclear-Pumped Lasers (aka Project Excalibur).

Both are powered by nuclear fission (sometimes fusion) bombs and focus their power in a single line. Reduces unnecessary destruction and only has the destruction in the beam itself, and probably uses all the fissile material more efficiently too. Of course, why it is not invented today is lack of money and materials that can withstand either, and probably some ethics too. Just assume that the necessary parts (necessary shielding that ensures both weapon beams only come out in one direction) are here for this question.

Assuming full efficiency for both weapons as intended, when should Casaba Howitzers be used over Nuclear-Pumped Lasers, and vice versa, in the time of some war (both land and space)? When is one more useful than the other? What aspects make it that way?

As people have already mentioned in the Comments Section, the "right" answer depends on how you plan to use this. However, I can give you some general guidelines.

Since nobody's ever actually built any of these, I'm going to work off of how these weapons are generally depicted in popular media and literature.

The general idea behind a Casaba Howitzer is that you are taking a nuclear explosion and then focusing it in one direction. In other words, you are giving up the huge blast radius of a regular nuke in exchange for applying more force to one spot. With that in mind, the obvious usage case is blowing up armored targets. You see, while "regular" nukes are very good at destroying cities and generally wrecking the environment, they aren't very good against "hard" targets; most of the damage comes from heat and radiation. A Casaba Howitzer, on the other hand, focuses all the diffuse concussive energy of a regular nuclear explosion and concentrates it down into one spot. As a result, while Casaba Howitzers aren't all that good against large targets, they can take out hardened targets without having to be literally right on top of it. Their one major problem is that while they have a longer range than a traditional nuke, it's still infinitesimally small if you're going to do space battles. 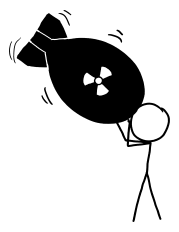 Space Warfare and Not Blowing Stuff Up: Nuclear-Pumped Laser

While nuclear-pumped lasers, like Casaba Howitzers, focus a bunch of energy down to one spot, they focus in just the radiation of the explosion. As a result, while they don't do anywhere near as much physical damage, they effectively sterilize whatever they hit. Furthermore, since their range isn't limited by the size of the explosion, they make an effective weapon in space combat. Their one big drawback is that they aren't very effective against Earth's built-in anti-radiation shield. 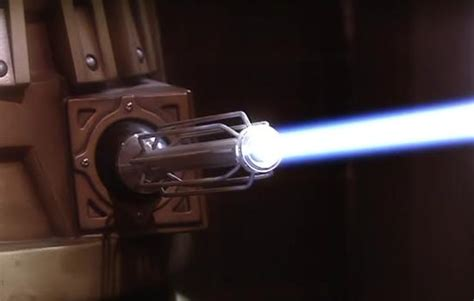 Nuclear weapon pumped lasers are massively far from "full efficiency." Only a minute fraction of the weapon's energy goes down the beam.

Lasers are never very efficient to start. The record appears to be about 10%.

And only certain types and ranges of energy are available for lasing. The fission fragments (the part of the nuclei that is left over after it fissions) gets the bulk of the energy. Typically for a Uranium fission, the largest share (above 95%) goes to the fission fragments (the parts of the nucleus that it splits into), another 4% or so goes into neutrons, leaving less than 1% in photon radiation. And much of this will be in an energy range unsuitable for the lasing process.

And the beam can only lase for the brief period between detonation and the vaporization of the mechanism that is lasing, probably a few 10's of microseconds tops. So even the radiation that might work will have a very brief window to be useful.

But the phrase "this hurts me worse than you" comes to mind. You set off a 20Kt weapon. Something like 0.2Kt of the energy goes down the beam. Both forward and back, by the way, since it will be x-rays that have the bulk of the photon energy. The rest of the energy is a nuclear weapon going off right where it was. Maybe that's useful if you have a stack of them in some location you absolutely don't want to use for the next 30 years.

My brief search for the Casaba Howitzer turned up some glib drawings and no hard data. I suppose you could get some directional asymmetry to a nuclear explosion by packing one side with neutron tamper and not the other. The equipment around the weapon would be more or less irrelevant considering how much energy is released. I think you'd be doing well to get a relative increase in intensity on one side compared to the other. It would not be anything like a beam or a jet. Not with technology available now or the next couple decades.

Not the answer you're looking for? Browse other questions tagged science-based science-fiction warfare nuclear-weapons space-warfare or ask your own question.

8
Economic feasibility of RTGs for base power
5
Building a workable nuke in my backyard is it feasible?
27
Railgun-launched nuclear warhead
5
Multi staged relativistic projectile usable in hard sci-fi space combat
2
Is using Casaba Howitzer like devices as precision-cutting implements plausible?
7
Why would non-kinetic weapons be used for orbital bombardment?
6
Are laser-stars the better missile carriers in space warfare?
5
What range will space battles generally occur at?