Can a planet destroy itself?

More often we have heard countless of familiar sci-fi scenario whereby the inhabitants of a dying planet faces world ending catastrophe most notable the superman origin. My question is can a planet blow itself up by any natural or artificial means? I thought of an angry super volcano but that seems like a severe outbreak of acne on the face on the planet and isn't life threatening or perhaps this is an understatement from me. The planet must be able to support the evolution of indigenous intelligent life. Immigrant aliens on a terraformed world do not count.

One thing that comes to mind is the example of Venus. According to Wikipedia:

Whereas Earth's crust is in continuous motion, Venus is thought to be unable to sustain such a process. Without plate tectonics to dissipate heat from its mantle, Venus instead undergoes a cyclical process in which mantle temperatures rise until they reach a critical level that weakens the crust. Then, over a period of about 100 million years, subduction occurs on an enormous scale, completely recycling the crust.

I imagine that such an event would end all life on the planet.

Effect of the star

There are plenty of ways of making a workd inhabitable, but if you want to destroy completely the plantet, you can have a look at the future of the Earth, in particular, in a few billions years, the Sun will enter a red-giant expansion phase wherein

the Earth will most likely be engulfed by the Sun.

To be fair, it will not be habitable before that time.

But other planets orbits other types of stars. If they orbit around a massive star, there is a risk that that star simply explodes in supernova, which might inflict sufficient damage on the planet.

In a similar fashion, a drastic change in the orbit may trigger a spiral of the planet diving on their star (oops).

From an energy reserves answer, yes.

It takes an enormous amount of energy to gravitationally disrupt a planet. For the Earth this number runs around $2.3 \times 10^{32} J$.

As this prior answer explained, the Earth possesses plenty of potential energy reserves (primarily in fusable hydrogen in our oceans) to disrupt itself. But how do you simultaneous fuse 0.5% of the hydrogen in Earth's oceans?

From a mechanics perspective, I can't think of any mechanism which could actually trigger such an event. Consider that Jupiter's impressive gravity can't even trigger fusion in it's core's deuterium. Drop a supermassive (6,000,000 megatons of TNT (600 times the world's [combined] nuclear arsenal)) explosion onto Jupiter and what happens?

Even something as powerful as the Sun's gravity isn't capable of detonating enough of it's hydrogen at one time to disrupt itself.

Based on the modern understanding of planetary physics, a planet with a Pure Carbon interior and an Oxygen envelope is possible for hot F type stars or planets that had life.

The facts: when Carbon is subjected to high pressures, it turns into diamond which is extremely dense. Diamonds are denser than most type of silicates or other "slag" you can find on planetary crusts. https://en.wikipedia.org/wiki/Diamond

Aluminium minerals are less dense than diamonds, and does not undergo phase transitions in pressures that supports diamond formation. https://en.wikipedia.org/wiki/Calcium_aluminates

When subjected to high pressures, Silicates becomes denser than diamonds and will sink. https://en.wikipedia.org/wiki/Quartz

Essentially, silicates and iron containing minerals have a much "softer" equation of state, meaning that they are squished to a higher density when subjected to high pressures than compounds based on carbon.

carbonaceous materials can accumulate in a star system by the fact that carbon have a much higher boiling point than water, meaning that primordial carbon grains that comes from a carbon star https://en.wikipedia.org/wiki/Carbon_star can be "dried" off water and volatiles by the heat gradient of the host star, forming a carbon planet near the star, while the ices accumulates in the outer star system. 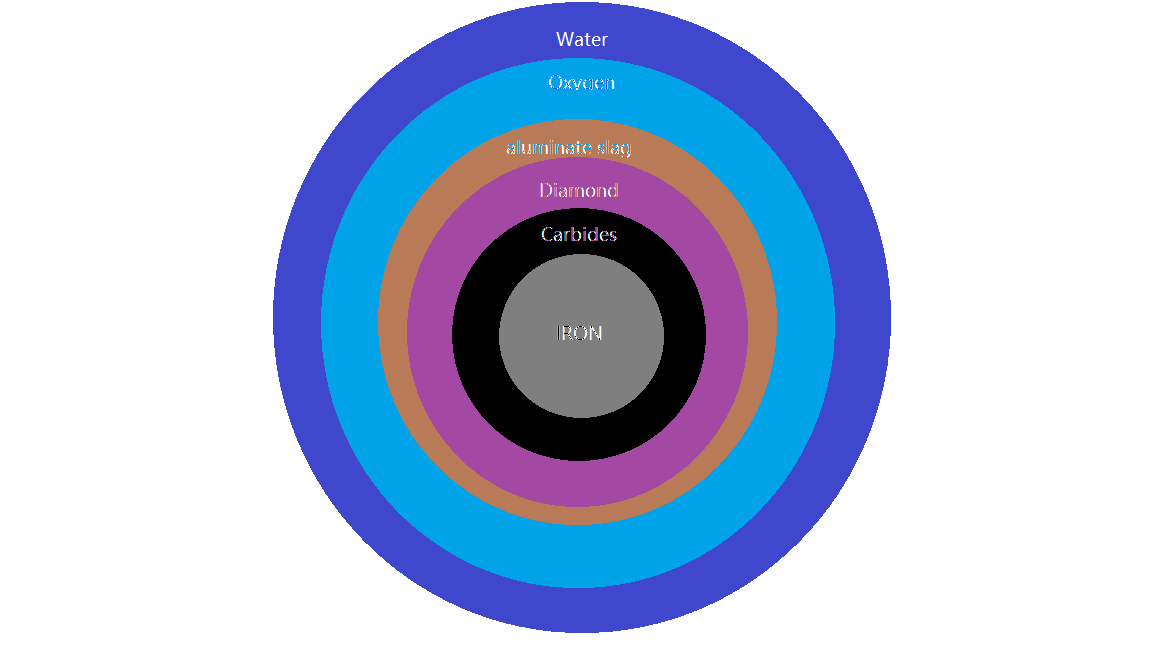 The planet first formed out of carbon based materials in the inner stellar system, consists of primarily diamonds encapsulating some carbides and iron. the diamondoid layer is impure, and the magnesium,aluminium,sodium and calcium raises to form a crust of calcium magnesium aluminates, calcium silicates and sodium calcium aluminates, forming a Plagioclastic crust over the carbonaceous interior.

the aluminosilicate based crust, being lighter than both silicon carbide and diamond, forms a protective passivation layer above the carbon interior, which will later absorb impacts and make water stable.

Now, because Ice is lighter than liquid oxygen, the mantle is very high up the planet's gravity well, therefore exerting little pressure to the rocky passivation layer beneath.

However, after the star have ignited it's fusion reaction, the strong UV will start splitting the water molecules in the planet's mantle and atomsphere, the hydrogen escapes, and the oxygen get left behind https://en.wikipedia.org/wiki/Atmospheric_escape Life may develope, and the resulting oxygenative photosynthesis only worthens the process. the carbonaceous interior means that the planet will be cold throughout, therefore having no Magnetic field. this allows atmoshere stripping by the stellar wind to match that of venus, which gets rid of the hydrogen very quickly.

However, this planet isn't venus, and there is an entire water mantle to resupply the atmospheric reaction, meaning that the molecular oxygen left behind by the photoatmospheric and biological process on the planet would accumulate to extreme pressures, before liquefying. meanwhile, the life on the planet would live in clouds of water vapour, photosynthesizing; therefore producing ever more oxygen and seting loose even more hydrogen gas.

Since liquid oxygen at high pressures become solid, and the resulting solid is often denser than ice, it will sink beneath the icy mantle of the planet. as the density of solid oxygen is almost 1.5 times higher than that of water, while the water is just 1.11 times more massive than the oxygen before the hydrogen escapes, the overall pressure exerted by the mantle on the passivation layer increases as the planet and it's inhabitants becomes denser and denser.

Eventually, the pressure on the passivating layer of aluminates became so high, the calcium aluminates recrystallizes to become denser than diamonds. the result is the catastrophic overturning of the planet's internal layers, with the oxidized minerals become denser than the carbonaceous inner mantle, this loss of passivation causes the solid oxygen upper mantle to come into direct contact with the carbonaceous lower mantle, and at high pressures of the planet's interior, this results in immediate ignition and explosive combustion of the diamondoid carbon, generating flame temperatures exceeding 3773°K near the upper/lower mantle boundary and massive amount of volatile carbon monoxide, which is not as compact as either the oxygen or the carbon. the carbon monoxide then drives a composition powered convection, shipping energy from the planet's interior to the planet's oxygen dominated atmosphere, where it burns into carbon monoxide and heat, burning the entrie biosphere alive, the "Apocalypse" part.

Carbon burns in oxygen for 32.50 MJ/KG, which translates into 9.68 MJ/KG for the average energy content of a hybrid carbon/oxygen planet, this equals about 5.78*10^31 Joules of energy, and because of the fact that the carbon mantle burns to become smaller in volume, the pressure on the reaction boundary steadily increases, resulting the slag sinking even more quickly into the planet's core, completing combustion within a few months. at 1.476 KJ/KG K for carbon dioxide, the event will heat the planet up to 6646.37K, making it glow temporarily as hot as the surface of the sun!

This may be the closest definition of a natural planet-shattering kaboom!

Not the answer you're looking for? Browse other questions tagged planets apocalypse .

78
The opposite to Worldbuilding: World Destruction
5
Can Earth become a micro Death Star?