The setting was a tropical, Mars-sized, ocean-covered world that has completely frozen over. Over the span of several years, the mean global temperature had dropped to below 200 Kelvin. Ice sheets had expanded out from the polar landmasses, as well as from the coastlines of the many chain islands that had peppered the seas, sealing the world in bleakness. Many dozens of millions of humans died in the sudden climate shift, unable to grow food and provide adequate shelter.

"Icefall" lead to the manifestation of great storms that plague the most of the planetary surface. Geothermal activities at previous volcanic island locations drive an engine of jet streams that continuously recycle and resurface the planet of ice and snow. Windspeeds for these storms can occasionally exceed 350 kph, and the rate of fresh snowfall can reach several meters inside a week. Due to the lower gravity, hailstones can rise to greater altitudes and remain airborne for greater durations, increasing hailstone sizes. Inside active storm regions, hail bombards the landscape with stones sometimes large enough to crush a man. On the relatively flat plain of the previous world-spanning ocean, storm structures are allowed to travel far with little topological obstructions and benefit from many geological "hotspots", before whirring off in some polar direction.

All in all, due to constant tempestuous winds/explosive blizzards, heavy snowfall, and destructive hail, it is essentially impossible to settle the surface at almost any latitude above or below the equator.

The poles, however, provide some safety. Both poles are home to the planet's greatest mountains. Storms that meander their way far north or south break and dissipate against the rougher terrain. Most humans who survived Icefall had done so in these polar "safe-havens".

To go any further, I have to explain a piece of Clarketech. Without going into much detail: after the onset of Icefall, a kind of biannual meteor shower takes place. Hundreds of thousands of tons of metal and slag enters the atmosphere and impacts around the globe. Among the debris are objects called "spinners". Spinners are two identical, long, bar-like rectangular prisms adjoined by a common face, counter-rotating w.r.t each other, typically at rates of rotation no greater than a few RPM. They're made from a metal that is, for all intents, indestructible, and no amount of ungodly force can slow their rate of counter-rotation, betraying a near-infinite torque and tappable work.

I should also note that for reasons mostly unimportant to the question, the human civilization is technologically suppressed by some unworldly force. Transistors and diodes fail erratically, and anything more advanced just does not function. The planet is also extremely metal-poor. The pre-Icefallen civilization was stuck firmly in a sailing ship era and could not leave the planet when hell broke loose.

The survivors of Icefall colonized the polar mountains and eventually re-established contact with one another via planes powered by "spinner engines"--simply engines capable of gearing up the slow yet inexhaustible rotation of spinners for more useful applications. They shared what technologies and methodologies they developed to thrive in the new climate and bootstrapped themselves up to an industrial civilization to rival the former of the sailing ship era.

Although the poles harbor many of the world's storm "shadows", there is a hard limit to how many people may be sustained by the crops, cattle, and timber grown there. A limit that encroached. Many city Lords recognized this, as well as how indefensible their territories were given the mountainous obstructions, the irregular and sometimes isolated arrangement of vital infrastructure, and the various angles of attack possible by neighboring states--the proverbial eggs in one basket.

Storms typically occupy the atmosphere up until around a couple dozen kilometers above the surface. (Due to the lower gravity, the atmosphere is much taller at around 160 km.) The environment above the storms reduces to a kind of trade winds; bands of steadily moving air connecting north and south, adjoined to the low-pressure equatorial belt.
As expansion across land halted, expansion into the skies began. It is often easier and cheaper to build airborne superstructures than it is to fight a war with a neighboring city. It is also easier, as a city Lord, to keep your power and influence consolidated if your flying "cities" are large and indivisible. A flotilla of small flying craft for example could succumb to a political division, and it's no good pouring money into expanding your feudal Lordship if half of it could fly away at the drop of a hat.

The Guild of Engineers created the first flying cities and revised the general design over the centuries. They were generally built to a nodal-like configuration of propeller vessels and suspension bridges--the propellers being powered of course by arrays of spinner engines. I'm imagining these propeller vessels as being a series of tall, wide, cylindrical, tunnel-like intakes housing great propeller blades and shafts, with suspension-bridge-like structures connecting to the exteriors of the cylindrical vessels at varying "levels". Buildings and other structures would then sit on and along the bridges.

Is this design for city structure plausible/ideal, given what the civilization has to work with? (Spinners, low gravity, hardy & lightweight wooden construction, scarcity of metals, etc.) Or, would the Guild of Engineers have dreamed up a better, more sound approach to massive flying cities that meet the demands of the city Lords? What are the limiting factors for city size, given an ideal design? How big could one plausibly get? 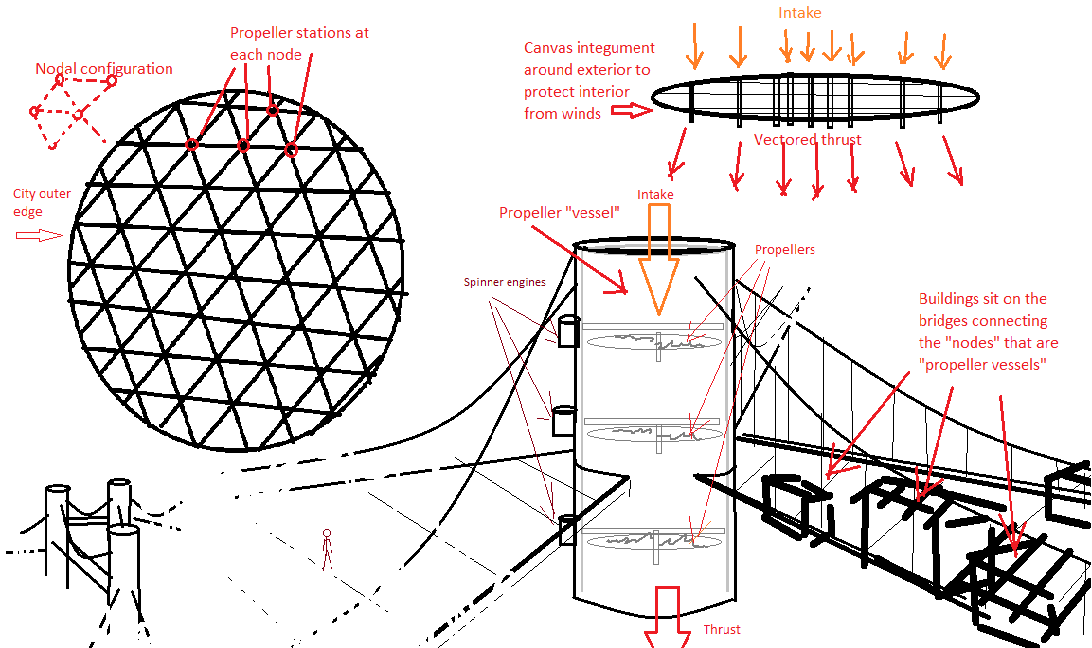 I probably should've paid attention to those SolidWorks lessons in highschool...

Edit: As @Alexp points out in the comments, there are inconsistencies with the climate of the planet. I'm still ironing out those details, they're less important to me than the structure and design of these hypothetical flying cities. The overall premise is that the planetary environment, from the upper to lower latitudes, is simply too harsh to settle or travel on.

Assume the city Lords have ample supply of metals and wooden construction to build such superstructures, and assume the mythical cork-hickery wood is durable enough to last in the frigid air (say, it doesn't so readily brittle and break).

From an engineering standpoint, the limitations I can point out are:

1 - Hypoxia / Anoxia. At > 10,000 ft above sea level (at least on Earth, with an O2 content of 20%), you need supplemental oxygen or your brain will lose consciousness due to lack of oxygen. So floating above a storm system with otherwise medieval technology won't work. Or rather it will work but then everyone on board will asphyxiate and die.

2 - Aerodynamics. Given that the majority of thrust is going to be used to counteract gravity and float (say 90%? Maybe even 95%?) the remaining amount of available thrust is going to have to counteract wind currents trying to push the city off course. With winds that strong and most of your power already spoken for I think these structures would be at the mercy of the weather and could get carried far off course. A ship at sea at least could use rudders and trim sails to try to ride out a storm, but this structure is nowhere near as capable of maneuvering.

3 - Economics. The turbines may have infinite torque (? I would advise against this though, since perpetual motion machines tend to make for bad science) but they are hardly abundant. Similarly, with good construction grade timber at a premium a structure like this would be downright gaudy... like the Death Star on a smaller scale. An ostentatious display of economic might that some falling empire might build as a vanity project, and then lose to a storm and become a legend. For most human settlements the reality will be like our own ice age ancestors - survival through migration, animal husbandry, use of tools, trade, intermarriage and stockpiling of foods.

Airships would make a huge difference to the survival of a society in those conditions and offer a much better thrust : weight ratio / economic use of turbines.

Not the answer you're looking for? Browse other questions tagged science-based reality-check cities .

17
Self-sufficient Ark
13
Would it be possible for a city floating on water to exist?
12
How would antigravity change the design of cities and buildings?
15
Designing cities inside a hollowed-out asteroids
12
Bridge over Lake Baikal
7
City defenses against kaiju attacks?
8
Size of a flying city based on dirigibles
57
What circumstances could lead to city layout based on hexagons?
21
Perpetual motion machines and rocketry