Would reducing drag be a good reasons for bird people not to wear much besides a loincloth when in civil?

I feel that most of my non-human civilizations are somewhat samey. While I could justify it with the fact that they were all the creations of the same two white fixers, I thought I should emphasize parts of their culture that are specific to their biology since I already decided not to change much about their politics and society.

Bird people are a bit interesting in that regard. They're volant (capable of powered flight) humanoids with six limbs (wings are separate from arms) and avian features such as scales on their forearms and calves, and clawed feet and hands (they still have five fingers). Beak-type and plumage vary. Bird people have, well, very bird-like heads but with forward-facing eyes, similar to eagles.

Most of the above info was probably pointless, but I usually leave it to the démos to separate the wheat from the chaff.

On paper, they're slightly more advanced than most human kingdoms and despite that, they have tribal-looking casual wear that is a loincloth and leg wrappings. Richer ones tend to add in small and colorful jewelry such as bracelets.

Note, their soldiers and guards DO wear armor.

While I haven't figured out the details yet, I imagined bird people's casual clothing to be something similar to this picture (minus the headdress). And here's the full image.

Might be a rating:questionable, but Minoan men dressed like that. You know what? It was fine on YouTube, it will be fine here. And before you ask, yes, this IS a JoJo reference!

The practical reason for bird people not having much clothing on them was supposed to be that:

Now, I'm uncertain about the last one. Would clothing add considerable drag to them, or would it be manageable but unnecessary, or completely negligible?

Since people in the comments asked about it, bird people have mammalian reproductive organs down there, NOT CLOACAS OR DUCK Ds (those are horrifying)!

The bird people would have no difficulties flying with minimal clothing although it would increase drag and thus require slightly more effort and be less efficient.

For example, here is a pigeon wearing a backpack: 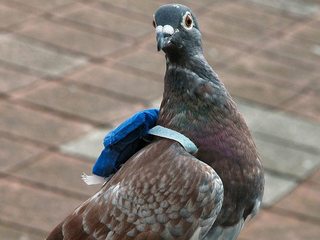 It has no major difficulties flying and backpacked-birds are often used when they're carrying research payloads or smuggling drugs.

Another example, trained falcons, often have some sort of strings or leashes for their handlers to grab onto: 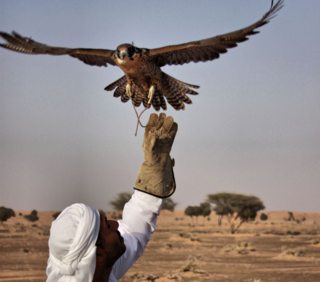 These strings dangle down during flight and clearly induce drag but don't cripple or greatly impede the falcon's flying ability.

Practically, I imagine most bird people would want to forgo clothing entirely, not due to drag, but due to noise. Feathers and avian forms in general are very streamlined in flight and any non-skintight clothes like a loincloth would flutter and whip around in the wind causing all sorts of noise. Skintight clothing isn't a good solution either as it would compress the feathers and look funny while making them less effective at trapping heat. I imagine the annoyance level would be similar to a human walking around with lots of loose change in their pants and making clinking sounds with every step.

Fashionable bird-people can stick to jewelry and maybe dye their feathers in exotic patterns or with exotic colors.

They would have less clothing, but to reduce weight, rather than drag

I expect these avians to develop a way of dressing that could improve their flying skills, even at the expense of a small increase in drag. Or maybe they could also have invented some kind of clothing that actually decrease their drag (like some kind of adherent cape).
Or think for instance to some kind of footwear (like flippers) that allows them to have some addictional thrust from the muscles of the legs, or even an increased flying agility, acting as flaps. Some footwear would add basically no drag and would be very useful in the case your avian has to land and walk

But besides the necessity to improve flight skills (which would be needed only in some circustances, like hunting, warfare or some kinds of sport), and protect your feet, I don't think your avian would like to add to themselves any useless weight.
Since I expect them to desire to fly in the most comfortable way possibile during the everyday business, I think that their main issue with clothing would be unnecessary weight, rather than increased drag. And since social dress codes very often derive from usefulness, I think that they would have almost no social taboos about nudity

Physiology:
Even unfletched humans really don't need to wear clothing, except where protective gear is desired. (Consider, for example, the indigenes of Tierra del Fuego went about their lives entirely starkers in spite of the fact that it gets pretty dog gone cold down there!)

Your bird folk have feathers, and presumably have other means of thermoregulation. Maybe they pant a lot? Maybe they have muscles in their skin that allow the feathers to be puffed up, thus allowing the breeze to reach their skin?

Culture:
The only question remaining for you to consider is what do their cultures prescribe them to wear? Most human cultures prescribe some kind of clothing, while others don't. There are different standards for each of the two genders (guess who can't not wear a shirt!); and there are cultural standards governing when & where one can be scantily clad (beach, but not board room). You're going to have to trawl the history and lore of these peoples to find out which side of the fence they'll most likely perch on.

My own winged folk like and wear (non-protective) clothing only for its decorative potential. These Denê are otherwise perfectly happy wearing little more than a few bracelets, some ink, and a fascinator. For what it worths, they too have wings, but do not appear avian in nature, and they can't fly.

Instead of clothing, perhaps they decorate themselves with feather piercings? Small baubles in feathers around the head might not add too much drag. They run the risk of getting lost during molts I suppose. You could have sections of society that, whether due to status or religious beliefs or something don't fly, so can go all out on elaborate piercings of all feathers.

Not the answer you're looking for? Browse other questions tagged science-based flight clothing or ask your own question.

15
How would society be different if humans possesed natural fur covering?
13
How would language be affected if humans had animal-like mouths?
69
Why does the Conjoined Alliance of Space Travellers keep producing red uniforms?
6
Surface Clothing for Merfolk
7
Autumn/winter clothing for winged humanoids who try to stay out of sight
28
What clothes would flying-people wear?
5
Humanoid avians with six limbs, how to modify their bodyplan so that their ribcage won't constrain certain movements?
3
Humanoids with wings, how do they take off?
10
The History of Werewolf Fashion, Part 1: the 2000s
0
Pragmatic Plague Doctors Mask