How would you create a map based upon scent (or other senses)?

Scale maps include reference scales and accurately represent to the distance between the visual icons.

Symbolic maps (such as subway maps) present import landmarks and relative positions between them. 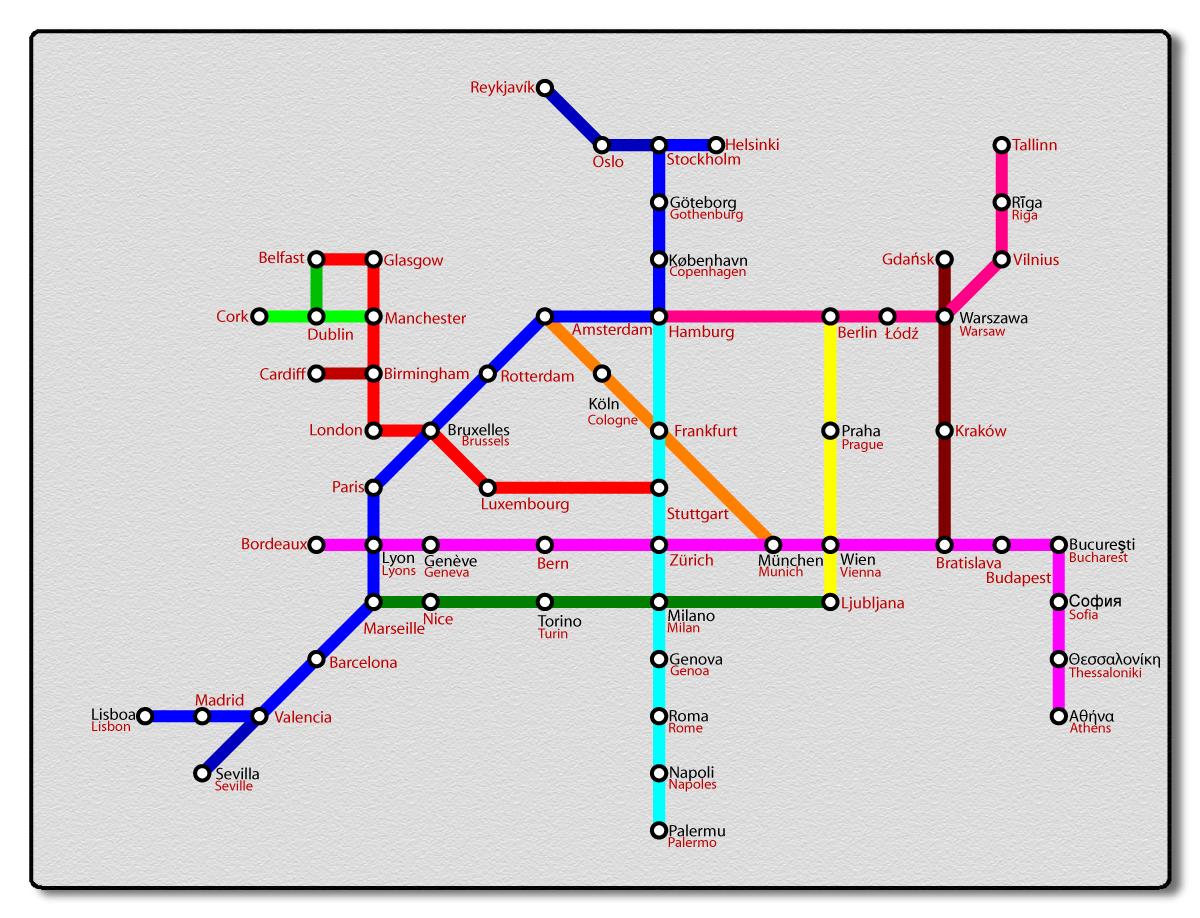 But always we use sight and symbols to represent what we see.

PS: Thanks to The Wandering Coder (see comments), here's what a Braille map looks like 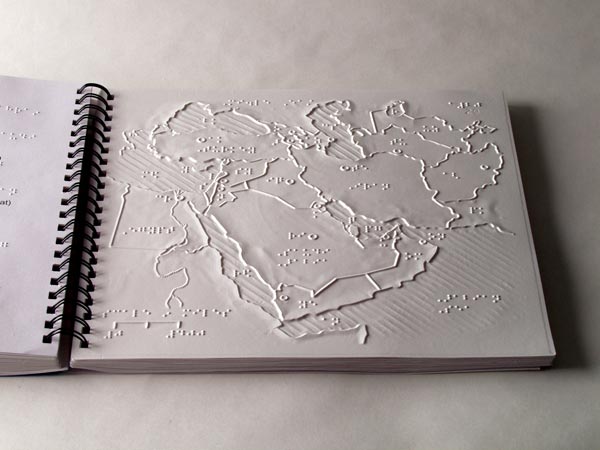 I doubt that a scent map could be accurate enough, for long enough, to be viable.

Think about it, most scents are somewhat impermanent: the flora will change seasonally, scent patterns will change dramatically with even a slight breeze, not to mention that even on a temporary map everything would be represented by an amorphous gradient. 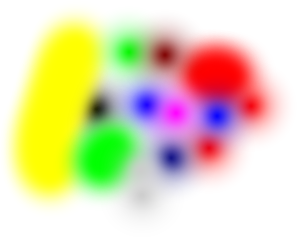 Species that use scent as a primary sense often use more of a Hansel and Gretel method, basically they leave bread crumbs or scent trails. A dog probably finds his way home by marking his path along the way. Similarly ants leave pheromone trails. Predators usually mark territory, but even then these markings are temporary and change constantly with the animals day to day movements.

An animal that has poor/nonexistent vision would still understand spacial relationships, so it would be a "map" as we understand it.

It would record points of interest and features, not just what they smell like but what they are. When we see a "river" on a map it is not a picture of water, and a waterway may look any number of ways. We recognize a waterway when we sense it, and the map is symbolic and abstracted.

Maps for some purposes may provide information on recognizing specific sensory input: street view is handy so you can spot the building rather than looking for an address marker somewhere. But it is not the main substance of the map and not necessarily present at all.

A map may be like the braille example, read by touch which is more localized and fine resolution. That makes me think that such a race would develop a touch-based writing system, too, making the example complete.

But suppose that the writing system does involve scent, or the people are pre-literate. A map key may use patches of scent and correlate with abstract symbols, or be attached by strings to the position being documented, if it needs to be larer and more isolated than the map's scale would allow.

A supplementary page may have a name as a characteristic scent or a cartoon of idealized scents that will make sense to such a being as a way to then recognize that place.

A linear map of a river or trail might be a roll of material (think a very narrow scroll) with tactile marks and scents along its length mimicking the characteristic or unique scents to be found.

Again, a "cartoon" rather than exact copy could be used: "a (specific) type of marshland with these kinds of vegetation" can be impressed, without the smell being actually the same.

I very much doubt that a animal that cant see a map would be able to make one. There are far more efficient ways of navigation for a animal that relies on smell.

A map that relies on smell would have too many similar areas of overlapping smell, none of which would be particularly unique. like this: 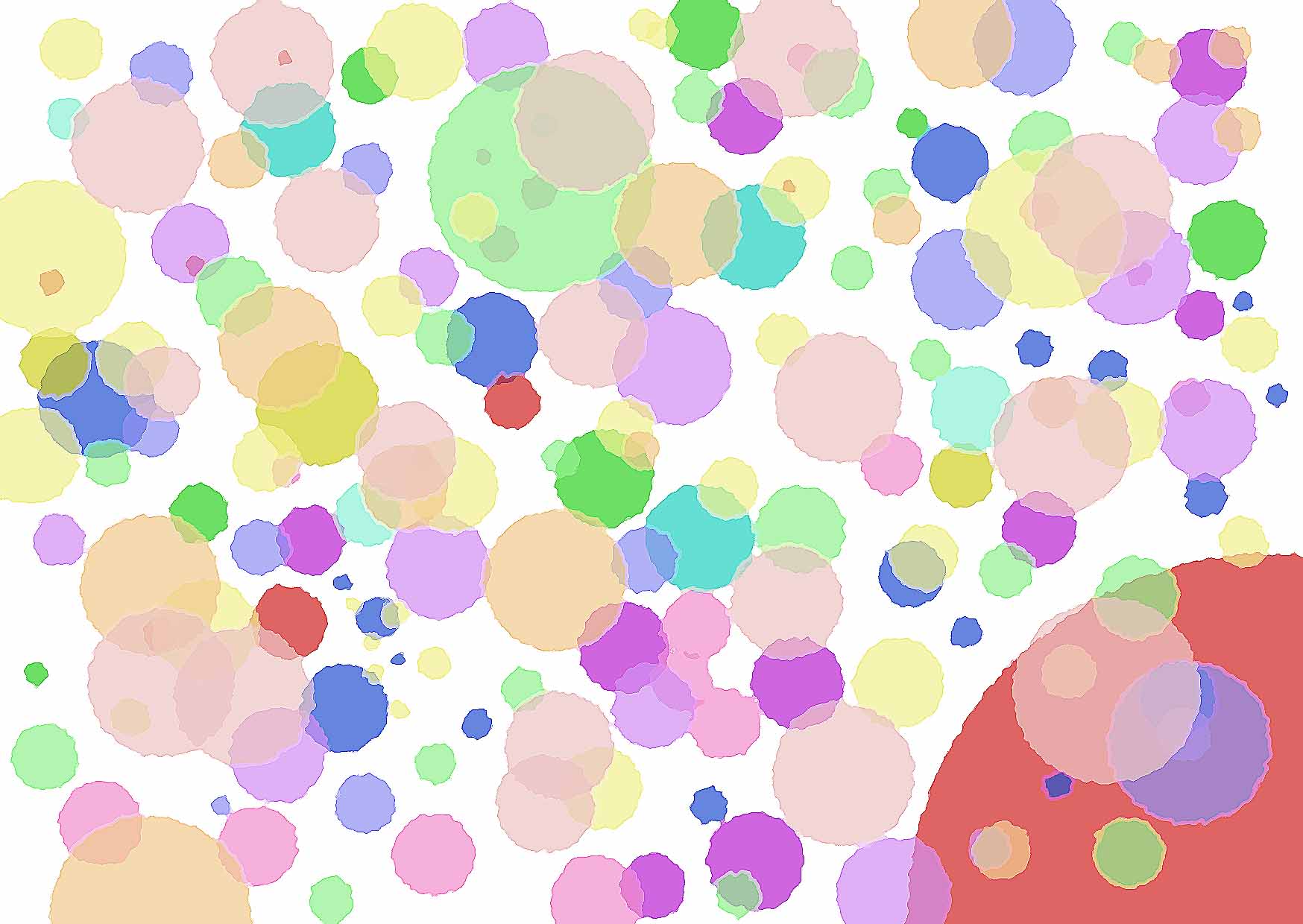 This would be hard to understand. though it may be useful to record the fauna, faunas and geology in a certain area.

Instead of a physical piece of paper, for navigation I'd suggest particularly strong smelling markers that cover a large area should link up in paths along the country. Then the member of the species traveling is given lightly scented sticks in a order that match the scents of the markers on there path. There would also be smells that they are taught to stay away from. I guess you could do the same thing with a map but the markers are an important part of the navigation method or it would not be clear enough to read.

We already put non-visual information on maps. I can look at a map of a place and know how to reproduce the noises used to indicate those places.

The answer for your alien species is the same: writing.

Writing lets you encode any of your senses in a different medium. We humans use mostly visual writing, but we also have several tactile writing systems. If you consider other ways we record information in physical objects, we also use variation in magnetic fields, which an alien species might be able to read.

We have a real-world examples of maps build on other senses: the waggle dance of bees. This is very interesting, but it boils down to a relative description of points of interest. With the colony as starting point it indicates direction and distance to the POI. With this way of information coding we could utilize a lot of senses to transport this informations.

The maps we make use several kinds of coding - shapes, colors, written language (letters), symbolism. A scent-primary map would likely need several layers as well, to separate the kinds of information being offered... and as I'm not sure how exactly scent as a medium can be differentiated as much as color and shape are visually (although maybe different base scents or top notes can be used as symbols, those with this type of mean variations of X, or that type mean in the Y ranges), I will assume that while scent is primary, a secondary sense is allowed. Touch is a good medium, since we have maps with tactile information - braille maps, and also globes where topographic information was included as raised bumps and dips. I think this kind of topographically differentiated map is a good starting point - it lets us get the shape of the environment pretty intuitively, and also lets us use shapes to convey symbolic information.

There are ways to store scent information for later - scratch and sniff stickers or paint is an easy example. There are ways to separate scents into a palette, basic scents building to more complicated ones, to talk about them, recreate them, and so on. This is not often used in casual conversation, since it is primarily of interest to the scent industry, but it gives background for how complicated scent can be, and ways to layer and combine them, or pick them apart.

After all of that, we take our scented paint (in a very wide variety of basic scent components) - and practice that artistic technique known as pointilism. Clever, precise little dabs all working together to create a larger picture. In this case, the different scents, notes, and layers contained in our wide palette of paints. Some base scent that's vegetal and plantlike, can be dabbed here or there with a sharper note to make 'pine', there with a mellower one to make 'moss' (or the reverse, I know it can be done, but I'm not trained).

General climate, topology, ecosystems, can be painted in this fashion either realistically or symbolically (that is, either "pines and oaks" or kinda forest-like or desert-like), as different shadings of color are used on topographic maps. For artificial structures, some symbolism will be needed, certain textures or shapes to mark paths, buildings, residences, towns and cities. But the scents can be layered to give further information - symbolically on a large scale, perhaps paper and ink scents to indicate administration, while a bread scent might mean a restaurant or grocery, as the legends on our maps use little color-blocks. Alternatively, the scents can be used very specifically on a local scale map - here is the bakery with the scent next to and overlapping the oak grove, there is the spice shop, mingling scents with the paper mill.

If the primary sense is scent, then they will be very good at distinguishing such scents - what we use as scratch and sniff paint might be perfectly legible to them even 'inactivated', or might be gently activated - brushing a hand over the map to activate the whole thing at once would give better legibility like we would get from moving to better light. The scents would wear off after a while, they are volatile, but probably not immensely more so than paper maps which fade, or get worn and tear, or just get lost. And they probably can distinguish both the fine distinction of the little dabs of coexisting or mingling scents from the scent-paint, and the overall spatial relation between the areas as the scent changes over the whole map, as well as we distinguish fine color shading or details.

We can use smaller visual maps because we have skill at distinguishing those details, those who use scent maps would have as much skill in their respective specialization - but for us, it might make sense to imagine the map is resized for our noses (as Braille ones are resized for our fingertips), so we can tell things apart. Maybe a poster sized map, where we can physically sweep over it with fingertips and noses to experience this area with these textures and scents is forest and those textures are grasslands, that area with those shapes and layers is city, there is the sharply contained and contrasting scents from buildings used for industry, here are each cuisine's scents from a restaurant area blending and overlapping along that street.

As for scents changing throughout the year, they would probably plan around it - either by using scents that don't change as much for primary identifiers, separating temporary form typical scents - or using them more symbolically. We don't get lost at the greenery on the map when autumn comes and the forest is orange, or snow falls and the streets are white, because we know what the map means and how the land should change.

Not the answer you're looking for? Browse other questions tagged culture aliens map-making senses .

33
How can I create a map of an underground city?
23
How to create accurate map with white spaces?
12
Is there any planet modelling software?
22
How can I create a map of a rapidly-changing world?
30
What would influence an alien race to map their planet in a way other than the traditional map of the Earth
2
How would plasma-based lifeforms interact with physical matter?
5
How do you map the climates and biomes on a tidally locked planet with no Coriolis Effect?