What kind of ships would an amphibious species build?

To give a bit of background and ground the question in context:

I'm concerned with the technology level from prehistory to Renaissance, or thereabouts. Analogous to Earth history, the 'normal' land-based species have already developed fully-rigged, square-masted ships.

However I also have an amphibious species that thrives equally well on land and in water (sea). They are based on a large archipelago with a lot of natural defences (straits, shallows, reefs, etc.). Their native islands are rich in natural resources in terms of ore, wood, and whatever else would provide the materials for conventional sea-faring tall ships.

My question, therefore, is what kind of ship designs would such an amphibian species develop? For my part, I've considered the following:

I've also considered the wild thought of some kind of submarine thing instead of a 'ship' per se, since drowning wouldn't be a concern (although goods would still get damaged). I'm not sure what kind of propulsion system this would employ, however.

If it impacts the answers at all, there is limited magic in the setting, but it's quite expensive (think blood, sacrifice, etc.) and tends more towards adjusting already extant possibilities in the world rather than 'conjuring' completely supernatural effects or events.

I'm also happy to clarify further or add info if this isn't enough.

Thanks in advance for any help, this one really has me stumped, as I'm not at all inclined towards engineering or anything like that.

Your ship will most likely resemble an ordinary ship of the period.

The drag of the ship limits its sailing speed, and to minimize it, you generally want to minimize surface area. Sleeping quarters, anchor points, underwater openings and such all provide excess surface area, slowing down the ship. A simple, smooth hull will be faster, and drag also influences how high a sailing ship can point to windwards, with enough drag a ship will soon be unable at all to get to windwards. Square riggers with their poor performance going to windwards are especially susceptible to excess drag.

The second reason is that being in the wake of a ship is dangerous, and highly uncomfortable given that you are effectively in a current. The wake may toss you about, smashing you against the hull, and even if you avoid that, items will be washed away, and you will be constantly pushed aft, while an amphibious species may be able to swim fast enough to keep up, it will be a constant strain.

Like our initial transport techniques on land, perhaps they would use similar ones in water.

Perhaps think of the culture they would have, and the technological developments needed to lead up to their current status.

For instance, I would image being amphibious, just like we are on land but they are underwater, that they would master domestication of animals first prior to any creation of machinery in much the same way we used horses to easily transport us around land prior to advanced ships.

This means perhaps that they would have trained fish / whales / dolphins to do their bidding since if they could 'breathe' underwater for extended periods this would be the easiest.

The examples where then more mechanical ships would be need are where there are deficiencies in using tamed animals as transport, namely:

So the creation of machines for these purposes make sense (same as development of our land vehicles). The wind could be used, but I would imagine it would combine with flexible hull materials combined with a flexible mast structure that could be erected or stowed on long voyages, propelled in other instances perhaps using available animals.

As time progresses, if animals were dispensed with completely, then sail ship with hulls full of water seem logical, prior to the invention of steam engines (if this is on the cards at all). For machinery, this would require all the developments we had on land, but in the water (difficult to say the least).

Topside these are hulled ships with masts, copied from landgoer tech. These boats can also be propelled via stern sculling. 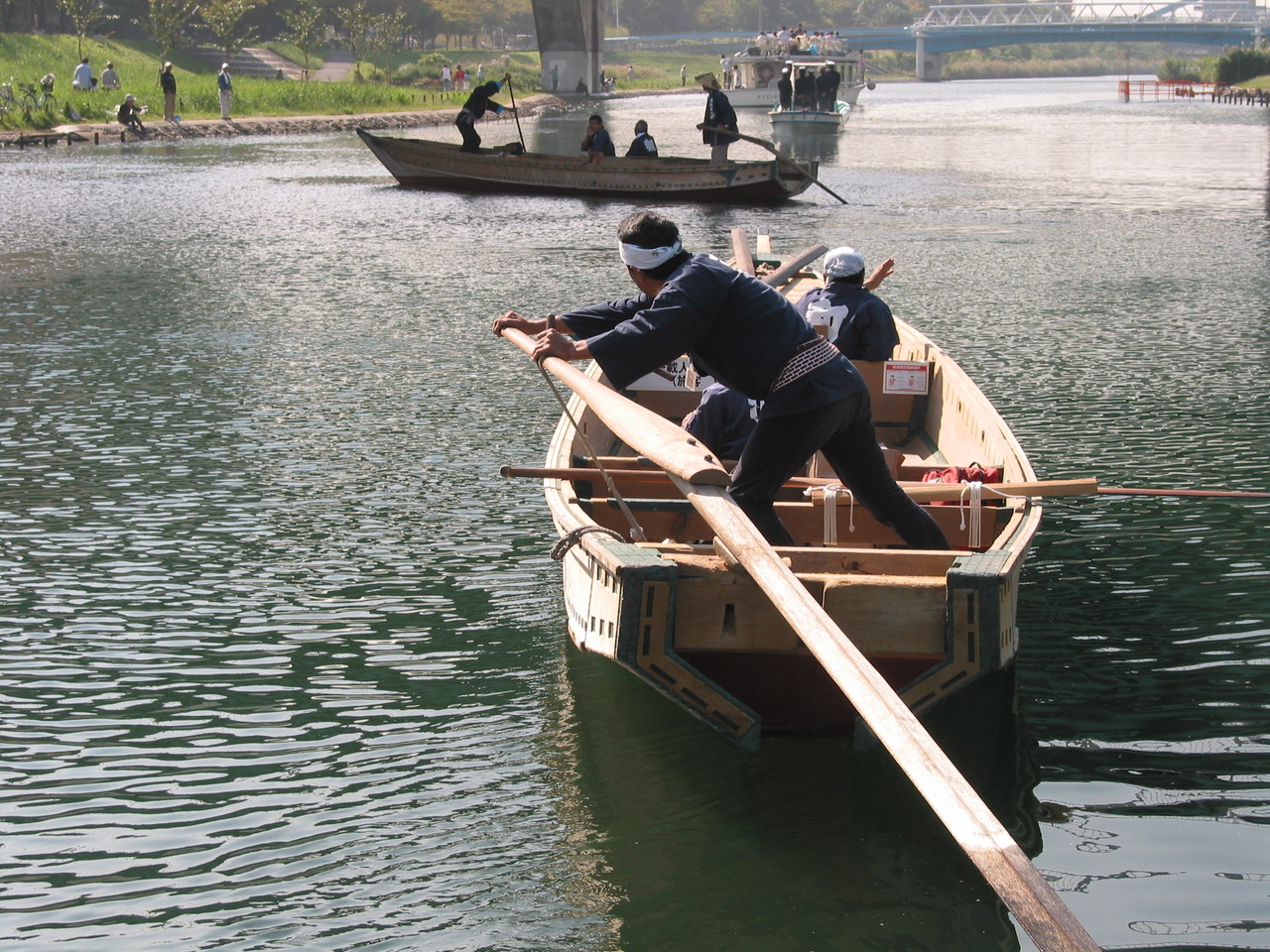 Stern sculling is the process of propelling a watercraft by moving a single, stern-mounted oar from side to side while changing the angle of the blade so as to generate forward thrust on both strokes. The technique is very old and its origin uncertain, though it is thought to have developed independently in different locations and times. It is known to have been used in ancient China,[4] and on the Great Lakes of North America by pre-Columbian Americans.

Topside sail driven propulsion is the fastest because of lack of water resistance. Topside sculling with the crew working several oars is second fastest.

If there is bad weather or the crew wants to hide they move the boat to depth. The hull cover can be pulled shut and the boat looks somewhat like an almond with smooth upper as well as lower surface. The boat is flooded and submerged. The amount of water allowed into the boat can be adjusted; generally the crew want to boat to be neutrally buoyant at a given depth. When empty the boat carries ballast rocks to adjust buoyancy. The almond shaped boat is hydrodynamic and the sculling oars work just as well submerged. The boat can move along at depth powered by the oars. For use at depth there is a horizontal rudder as well as the vertical rudder*.

*although I do not see a rudder on the Japanese scull-oar powered ship. I wonder if these use a different method of steering...

As regards how the crew sleeps I imagine an amphibious species has sorted that out long before they were building boats. Maybe they sleep one half of the brain at a time like cetaceans. That would have interesting ramifications - for example could they still row when half asleep?

In addition to the other answers, these amphibious creatures would probably build fully submersible swimming enhancers that allow them to swim faster, or drag large cargo.

Underwater carts would be large hydrodynamic shields that you place in front of large awkwardly shaped cargo to reduce it's drag. You might also hitch an underwater cart to a trained whale or something.

You might criticise this idea by pointing out that they are amphibious, they're evolved to travel underwater. However the ability to move on land requires compromises for swimming, such as having legs. This means that any amphibious creature is much slower underwater than a fully underwater creature. The hydrodynamic swimming enhancers would reduce the drag caused by having legs, arms and necks.

The basic construction principles of ships would not change, because the problem the ship is supposed to solve (transporting things from A to B via waterway) does not change.

An amphibious species would indeed have less problems building submarines because they don't need to solve the problem of keeping the crew dry and supplied with breathable air. But submarines are for niche applications. You only need them for stealth or if you want to go someplace that's under water. They are inferior to surface ships when it comes to transport. They require more energy to maintain the same speed (because water has more resistance than air) and they can't use wind energy. So if you want to transport cargo or people in the most efficient manner, you would use a surface ship.

If it's compatible with the rest of your vision for the amphibian's culture/history you could have them rely on a network of suspiciously convenient and reliable underwater currents, which they can ride with no assistance like an escalator, or use a underwater sail to move more efficiently. This would imply that at some point in the past they did a whole lot of ritual sacrifice to build this network.

Aside from that, it might make sense to have them utilize sailboats that are more advanced than the land-based cultures. The idea being that since seafaring is easier/safer for them by default (not needing a fresh water supply, being able to forage more effectively, etc), they likely started developing ships much earlier. They also could build ships which are less sturdy (hence, lighter, faster, can be build larger with less material, etc) since they can more easily make repairs at sea, and minor leaks and such wouldn't bother them as much.

You could also explore some interesting ideas for domesticated/tamed animals. E.g. cargo barges dragged by whales / large fish. Notably this could also have started much earlier into their cultural development than it's land-based equivalent would have, since they didn't need to invent the wheel or axel first, a bunch of logs lashed together with kelp tied to a tamed whale that filter-feeds as it pulls could give you a really efficient cargo transport with very early technology.

I really like the point about enhancing the mobility of swimmers with mentioned by @UEFI above, I think that the salt/fresh water issue mentioned above aside, that vessels would be more adapted to having free flooded areas. A vessel would have three main characteristics.

Be able to carry stuff - this could include stuff from land that would be damaged by water, cargo like grains for example. Keeping stuff dry would be a problem. Corrosion of metals would be a problem too... as would barnacles and sea-growth on surfaces.

Be able to move efficiently - getting part of the hull out of the water would reduce drag, being able to use wind would allow faster transport. Being able to control buoyancy would allow a submersible like vehicle to be pulled underwater more easily, but could also have the disadvantage of being pushed by currents very easily. So some choices there about how to keep you craft in position and not have it drift and move with the tide or currents.

Transition from one environment to another - Being able to transition from sea to land. This is more difficult to do efficiently, but there is a lot of room to play with different concepts. Is a wheel an obvious invention for an amphibious species? But there is another constraint which is the depth, and pressure of operation that your craft would be able to operate, both for the amphibians and for the vessel itself. Free flooding reduces the differential pressure, but as soon as you want to have dry chamber, or buoyancy control understanding how pressure would impact the design would be important. In addition to pressure, it gets dark pretty quickly as you dive quicker underwater.

Not the answer you're looking for? Browse other questions tagged engineering underwater ships species shipbuilding .

2
How would a aquatic race make ships

13
People of the Sea- Living on a Migratory Fleet
61
What would it take to build a ship capable of crossing the Pacific?
4
What kind of city would cephalopod aliens build for their gods?
3
Forging metal under water, using thermite
5
What are the limitation of skin ships/boats?
6
How would dragons utilize ships?
6
What kind of house would merfolk build?