can Elf be in family with Fairies and Angels?(updated)

need a bit help with an Elf species I am making.

I am thinking about making them family with fairies who is in my world; some type of dragonfly. of course, I have no idea this is possible.

My Elf almost looks like what most people see as 'Elves'but I did make them with weaker bones and is an ancestor of the Angels which technically makes them Nephilims who later evolved naturally into the common elf we all know and this is my reason why they can do magic and is near immortal. I do need help with the other side of the family tree, the none-Angel side.

do you think it is possible for a dragonfly or other type of insect (spiders/scorpions, butterfly, wasp, etc) to evolve into a 'caveman' elf who looked just human enough to have kids with the Angels? is it even possible for an insect to look like a humanoid race or do I need to look into other species of animals to make the elf family/species tree?

don't know if you need more info than this. I will add more if asked.

EDIT: I think I need to add this since it has come up a few times.

if there is more thing I should add, please tell me.

Edit 3: so after some links and answers, I've gotten I concluded that it might not be the best idea to make the Elf in a family with insects due to their anatomy. although I am still not sure what species I should link them to. the User named @Daron did say this best;

"I think now is a good time to start a new question, that includes all the stuff we talked about here, and probably doesn't mention angels at all, since everything to do with the angels can be explained by magic. All in all, it's not clear what you're asking for to me, and the main problem seems to be "how can we have tiny flying sentient humanoids?"

if you are still willing to help me out with this, I appreciated it. and thank you for you who helped me out this far. I am still looking for the answers but I am glad for the information I have at the moment. 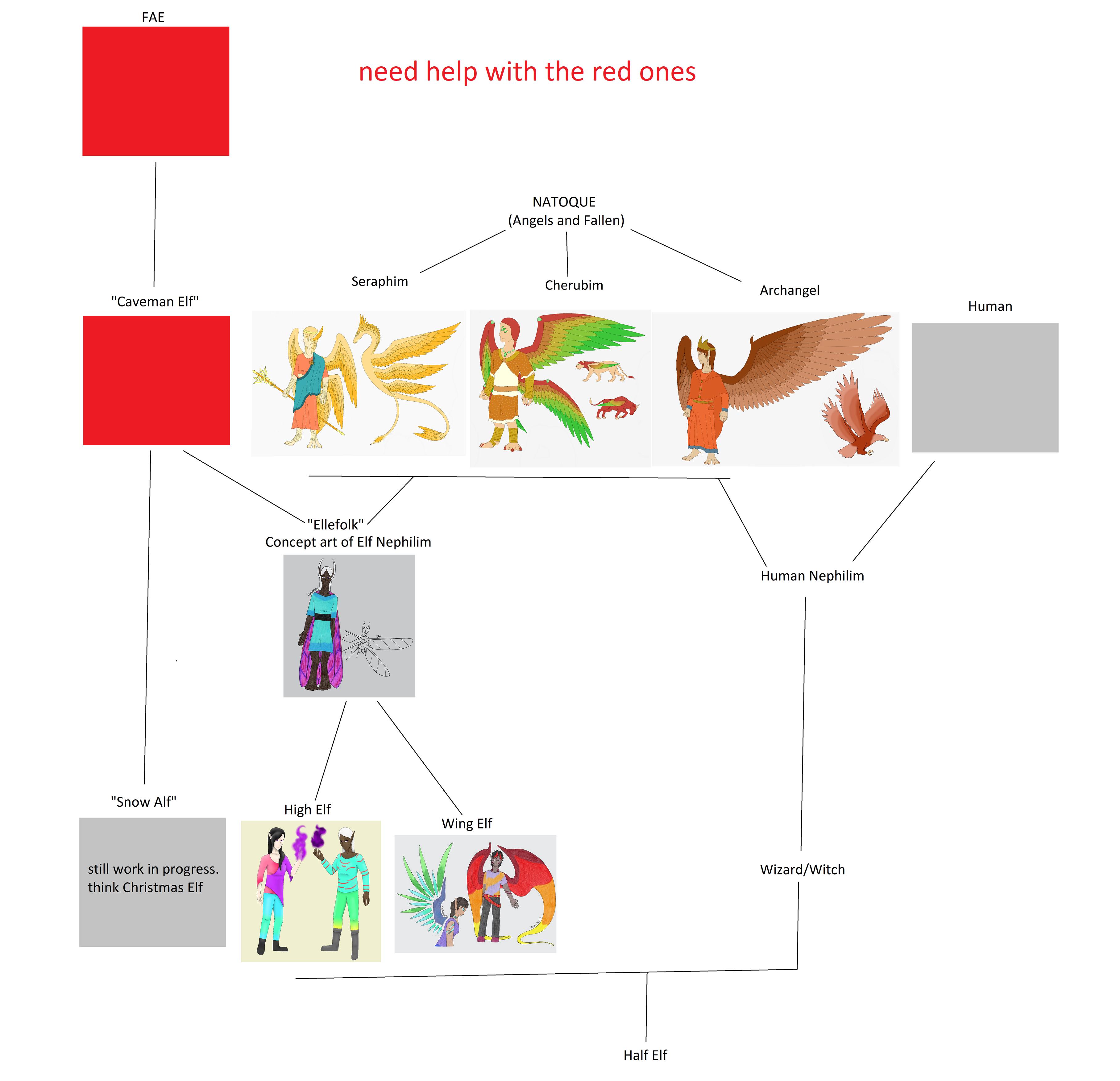 Angels do not reproduce biologically.

Nothing scientific can be said about the evolution of angels (evolution was originally the only tag in this question). From a scientific point of view angels do not exist. This is the same as saying there is no empirical evidence to believe angels exist. Even if they did exist we know nothing about their evolutionary biology, so it's a moot point.

In general two different species cannot reproduce. A horse and a donkey can just about manage it. An insect cannot reproduce with an ape, unless the insect somehow evolved into an ape beforehand. This has never been observed.

That is good for you!

This is your get out of jail free card. Since angels are not real, you get to decide the rules. They might be able to reproduce with any animal in a completely nonbiological manner, simply by pointing a finger and declaring it to be so.

I think there is already a story like that, but I cannot currently remember the name.

How can angels reproduce with animals but not each other? Your angels are sexless and based on the Judeo-Christian ones. Those guys are often described as made of spirit or holy fire. So they contribute some of that stuff to an animal host, who does all the bodily work.

Angels are agents of creation.

God was the architect of Creation. But there was a lot of work to do, and various types of angels were the ones that did it. Like a general contractor following the plans of an architect, the angels who actually carried out creation had more or less autonomy in what exactly they did.

Nephilim were produced by a particular subset of angels who were creatively pursuing their directives. This might be the same task group responsible for dragonflies, mayflies and dobsonflies among other things. The Nephilim were created using the same basic source code with the result that various hybrids are possible. Eventually this gave rise to your elves.

Well, do your elves need to be real elves? Or does it suffice for them to look like elves? What if they are some human+, with some genes from whatever?

Tapping into what this lady wrote, they might be some posthuman, very long-living, somewhat strange creatures with a shared subconsciousness, limited telepathy, abilities to warp reality, etc. But they look like elves to those who don't know better.

As far as angels are very powerful beings in any way, I would assume they can mate with any creature and have offsprings, even creating a new specie. In fact, Tolkien's elves are a specie with angelic qualities, but that's besides the point.

The second relevant information would be that angels are related to a god, and generally humans are similar to God. Therefore angels might also produce sth similar to a human (an elf).

I'd picture it as if a human would pick a human cell, splice it with an insect one and clone it. What you'd have is an NGO human.

What insect genes would be used? It doesn't matter, they could be invisible or have evolved over time.

Not the answer you're looking for? Browse other questions tagged magic evolution fantasy-races insects angels .

17
What could make an insect race intelligent?

33
Why would an army of angels with air superiority fight demons on the ground?
20
If angels and devils are the same species, why would their mortal offspring appear physically different?
3
Humanoid with Insect like Wings
3
Could creatures similar to old testament angels actually fly?
4
How can an artificial soul be made more Palatable for angelic possession?