Is it a good idea to shove your arm down a werewolf's throat if you only want to incapacitate them?

So, I decided to change subjects... for a little while.

I also have werewolves (they don't transform, though) in my meta-setting. Now, they're very much humanoid, though more wolflike in other areas than what you usually see in horror movies, especially their heads. Think of something like this: 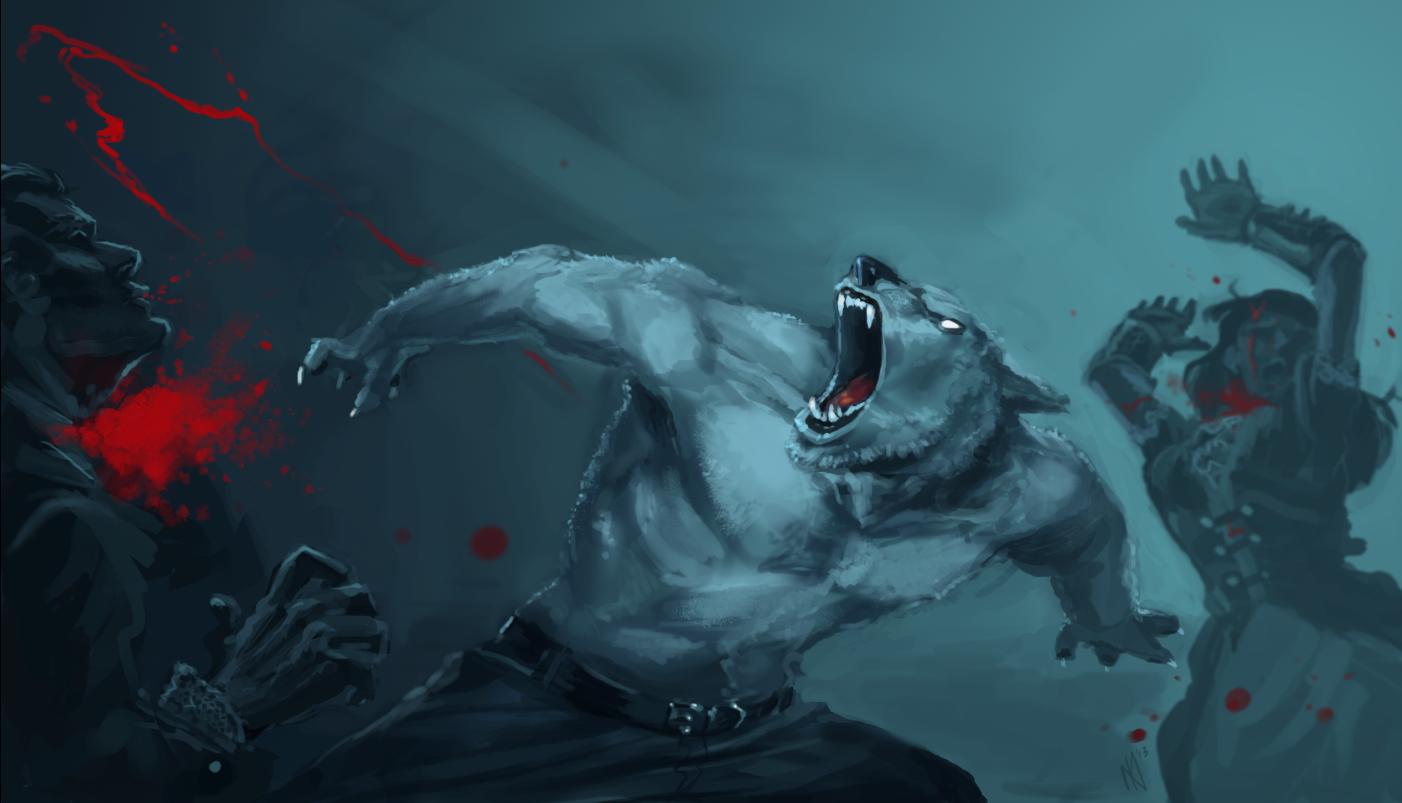 Werewolves possess considerable strength (on par with Alexander Zass), but they're still limited by their size (190-200 centimeters tall) and mass to human levels.

Now, there is a move that can be employed against frenzied werewolves (aka: werewolves whose minds have temporarily regressed into an animalistic state). This move can only be practiced by the most badass characters as it involves shoving your arm down the creature's throat, but at least the maw. On paper, canines shouldn't have that much bite force, compared to hyenas and crocodiles, so with rigid plate armor it shouldn't leave a mark. The move was supposed to trigger a gag reflex while also constraining airflow.

However, as werewolves are still people, this move is only supposed to incapacitate or help with incapacitating them when they're feral, as fully sapient ones wouldn't try to bite.

But would this move be less-than-lethal? I mean, it has to be done with strength and I'm not sure how high is the risk of something vital breaking in the process.

Can someone survive a fist down their throat?

Yes. How do I know this? I googled really nasty pornography. If you need proof feel free to do the same. I decided against linking to any directly.

You need an arrow head shape made out of fingers with the thumb tucked into the palm. Trimmed fingernails are also a must.

Doing this in a hurry is also really dangerous, and with dry hands also seems really dangerous. Wet your hands (ideally with an oil or lube of some kind) before doing this to get some lubrication.

Will it subdue them?

I doubt it, if anything it will probably enrage them.

Note just like the videos, the werewolves will be able to breathe through the nose with an arm down their throat, I don't know if it's a factor of depth or hand shape but it seems unlikely to be able to asphyxiate someone this way. They'll probably throw up or be able to pull away from your fist.

Even if you cut off their airway completely, they still have 10-15 seconds to pull away and free their airways. Unless you're pinning them down at the same time they can escape pretty easily.

What you'll have is one honking pissed-off werewolf

Ignoring the fact that it's your world, I'll assume that the mechanics of the werewolf's jaw are similar to terrestrial wolves such that something as large as a human arm will force the back of the jaw apart, robbing the jaw of the strength needed to bite down and critically injure the defending human. By "critical" I mean loss of the arm. In other words, they'll not only survive, they'll probably keep the arm.

But, honestly, now what?

It put's a whole new spin on the idea of having a tiger by the tail or a wolf by the ears. You know... you really can't hold on forever but you're scared to death to let go.

So, unless the defending human has the ability to grab hold of something vital and rip it out, instantly disabling the wolf... this is a really bad idea.

P.S. I really only looked at this from the perspective of the arm-down-the-throat. @Dragongeek's right, that doesn't stop the werewolf from whipping the defending human around like a rag doll (don't just think tug-o-war... think alligator death-roll). I'm also ignoring the fact that the wolf has four claw-laden paws that are now in close contact with the human and the human has basically nothing due to the loss of balance and the fact that the free arm is on the far side of his body, away from the wolf. No self-respecting werewolf hunter would ever let themselves get caught like this. It's a noobie mistake (which is why there are very few noobie werewolf hunters).

I don't think it's a good idea

If you look at a video of canines eating a carcass, you'll note that their tooth and mouth structure isn't designed to bite off pieces but rather tear away pieces that are big enough to eat and then swallowing them. In this video where wolves are eating, you can see that they often engage in tug-of-wars with the meat they're trying to eat and twisting their heads to rip off pieces of flesh.

I think putting anything fleshy in a wolf-like creatures' mouth might trigger those eating reflexes and cause the creature to bite, twist, and pull instead of gag or be subdued. Unless your hero is very strong, they'd likely end up getting dragged around by the arm or end up with their body being the rope in a tug-of-war.

It depends if the werewolf is fully transformed into a wolf. Against a wolf, that's a good form of defense. However a werewolf can pull your arm out because he has hands, so it's impractical.

Werewolves are often bestially strong, and their hands are more likely to have claws than blunt nails, so the werewolf can scratch too, he has more weapons.

Okay, so I actually was recently researching this exact thing for a story I was writing also with a werewolf character. Ultimately, I went in a slightly different direction, but what you’re suggesting would probably work. Since your werewolves are closer in the mind to wolves than people, when you stick your fist down a wolf’s throat and cut off its airflow, the wolf will probably back off and decide you’re not worth it. You can also just put the wolf in a choke hold, tho, which isn’t as glamorous, but it is less slimy. Wolves, if killing for food, need to kill something that would give more energy than is lost during the searching and handling time, so if they see the human as a prey item, it fighting back would dissuade them. If it is attacking in order to protect itself or its pack, it might be harder to dissuade, but the wolf won’t benefit from letting you kill it.

From personal experience, it works on dogs.

You just have to stick your hand about as far in as the back of the mouth and they will start to gag and immediately let go. It doesn't even have to be that hard (especially if you are not trying to hurt them, but just trying to get them to stop biting).

The operation of most animal mouths (especially the teeth) is such that its hard for something to pull out, but much easier to push in. So generally speaking, once the hand is in, its not too hard to move it to the back of the mouth. Once your hand is back there, you mainly just need to feel your way into a good seal with the throat to trigger a gag.

If you don't have any armor you may get some scratches from the teeth. But the reflex from a dog that has something lodged in its throat is one of immediately pulling out rather than trying to bite. You also need to be quick about getting all the way in, because you don't want your hand chewed as you linger.

From a fight mechanics perspective:

The werewolf can still breathe, according to @Ash's claims above. However, it can't get as much air as normal, so its' cardio abilities will be limited. But that probably doesn't really matter, as at this point neither of you are going to be running.

Whilst the werewolf lacks the jaw strength to tear your arm off, it can still embed its teeth into your arm. You're going to be bleeding, potentially fast if it has been lucky and hit an artery, but it's not going to be pretty. This will have a negative impact on your ability to fight, increasing as the fight is prolonged

You're going to struggle to get it to release your arm unless it wants to. If you struggle, its canines are going to bite deeper into your arm, worsening the above; this will also be extremely painful.

You have one free arm. The werewolf has two. It can use one arm to imobilise yours, and the other to hit you.

This is assuming you can get your arm in quickly enough. If you don't it'll bite down on your hand early, and you won't even have the advantage of reducing airflow. Dogs hunt by biting and hanging on until the prey loses strength.

If you trigger a gag reflex, you might have a brief advantage; but we don't use this technique commonly in fights against humans, who lack all the big teeth, so it doesn't seem to be a significant advantage. (Correct me if I'm wrong, but I've never seen a martial text say "if they open their mouth wide stick your hand in"). Furthermore, whilst a wild beast may have a strong gag reflex, a frenzied werewolf seems like it probably won't care that much, so this seems like it might be less effective against werewolves than humans or dogs.

The utility of this move seems dubious at best. I can't see any sources on "how to defend yourself against wild dogs" which suggest sticking your hand down its mouth. If this was effective, Police Canine units would see it used against them.

The werewolf appears to have the absolute advantage in this situation.

That's an essentially human opponent who probably has the same weapons as you.

Why is sticking your hand down someone's throat a smart move? Yes, you can kill them that way, but it's not one that is taught and is fraught with problems.

Treat them like a human opponent and go for the obvious vulnerable areas. The only difference is that they probably bite worse so the mouth is the bit you want to avoid.

Their ribcage may be much more vulnerable if they are actually wolf-like though -- and an attack on the sensitive ears will definitely distract them. In fact, have you thought about a powerful dog whistle?

Not the answer you're looking for? Browse other questions tagged science-based biology martial-arts or ask your own question.