How should the eyes be arranged that can see microscopic objects?

The phenomenon of "microscopic vision" (mainly according to NS Leskov's story "Lefty") is an amazing visual acuity, for example, some grinders are able to see gaps up to 0.0005 mm, while ordinary people are only up to 0.1 mm ... The artist distinguishes between changes equal to 1 / 60-1 / 150 of the size of the depicted object.

And so, how should the eyes of my genetically modified person be changed so that he can distinguish very small objects ?, up to unicellular organisms, which are known to vary in shape and size, ranging from 0.3 microns.

Note: I should probably divide this topic into two parts, depending on the development of microscopic vision: first, where this ability should not interfere with seeing objects in the distance at today's level, and where this ability is a priority, due to which it can overlap other visual abilities.

They can see UV, although...

If they are to see details of size $0.3 \ {\mu m}$ while holding an object close to their face (let's say $15 \ cm$ away), they require an angular resolution of $\theta_c=2 \times10^{-6} \ \text{rad}$. Smaller $\theta$ means better resolution. The diffraction-limited resolution of a a circular aperture (like an eye) is

Where $\lambda$ is the wavelength of light being imaged, and $D$ is the aperture diameter. Plugging in the values $\lambda=550\ nm$ (wavelength for which humans have the highest sensitivity) and $D=8\ mm$ (optimistic estimate for a dilated human pupil, ie. at night), we find

Some animals have cone cells that are sensitive to UV , although not as far into UV as your people would need. Perhaps when they need to look at something small they shine a UV lamp on it in an otherwise dark room. They would also see the world differently if they are also sensitive to near UV: you can get a feel for that by searching "UV film photography".

Far UV is harmful: it's used to sterilize things. I think this is where most of the 'genetically modified hand-waving' must be. Their eyes can't block out the UV, but also should be able to survive it. Maybe the cells in their eyes have modifications allowing rapid repair after exposure to UV.

There is an interesting correlation here that you might want to explore: The more dangerous the light: the better the resolution. UV with a lower wavelength is less harmful, but allows a worse angular resolution: in the much less dangerous near-UV, $\lambda \sim 300 \ nm$ we have $\theta=4 \times 10^{-5} \text{rad}$: that's enough to make out a $6 \ \mu m$ feature (such as a white blood cell) at $15 \ cm$. 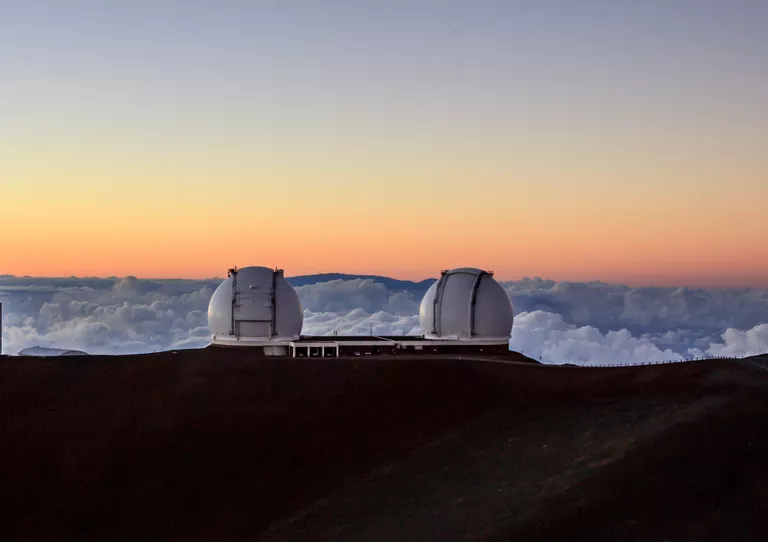 Astronomers have a similar issue to you, in that they want high angular resolution but struggle to make large mirrors. Instead, the Keck uses 2 reasonably sized mirrors and cross references them for much greater angular resolution.

If you're willing to handwave superhuman image-processing ability, you may be able to reach an effective 30cm eye diameter by fusing the visual data from 2 (or more) eyes spaced 30-40cm apart, which as per Sal's answer gives the resolving power you want. If you combine it with the suggestion to see into near-UV, you can relax this requirement even more.

Not the answer you're looking for? Browse other questions tagged biology hard-science super-powers optics .

11
How to evolve human-like eyes that can stare at the sun without protection?
2
How can a race that relies on echo location to "see" protect against sonic weapons?
11
How can my dragons follow your movement with their eyes?
2
How should the eyes be arranged adapted for astronomical observations?
5
How can I cool the body of a human such that it can see Long wavelength IR light without its eyes glowing
10
How can an illness make one's eyes turn green?
2
How should the respiratory system of a person adapted to high-mountain conditions be arranged?
0
How should the human body be arranged, adapted to the lethal level of radiation?