How can a hermaphrodite man reproduce while ensuring genetic diversity?

So in ordinary people, the formation of gender occurs in the hippocampus and hypothalamus in the second month of the embryo's life, after which the initial orientation is stable. If there is a desire to increase differentiation or create ambiguity, you need to start in utero. In the first eight weeks of pregnancy, leave the Müller and Wolf ducts active, where the bipotential gonads are still located. Anti-Müllerian hormones, which are activated by genes on the Y chromosomes, can only be allowed into one of the Müllerian ducts. The result is usually ipsilateral, both ovaries suppress the development of the Müllerian duct each only on their side, as a result of which further, XY embryos need a moderate intensification of androgenic function, produced in the fourth week, in order to avoid masculinization of the hypothalamus, which is responsible for sexual differences. XX embryos require the application of androgens in one Müllerian duct to stimulate the growth of the Wolffian duct. As the Wolf's duct develops, the Müllerian duct on this side will undergo apoptosis. The basic genetic structure determines the difference between hermaphroditism and gynandromorphism, often not recognizable by external features. XX people with conserved Wolffian ducts are gynadromorphs, and XY people with conserved Müllerian ducts are hermaphrodites. In both cases, androgens and estrogens are used together with hormonal supplements, the child is born with the potential for the development of both sexes, and the body is waiting for a choice.

Gynandromorphs can usually only conceive daughters, since the creation of a Y chromosome based on an X chromosome seems to be problematic. In women, functional male fertility is enhanced by imitation of the natural deficiency of 5-alpha reductase.

According to the plot of my story, my superhumans are asexual creatures capable of producing offspring (all the same genera) on their own, without the help of another partner.

Asexual reproduction is characterized by the fact that the offspring arises from one organism and inherits the genes of the parent. It does not include gamete fusion and the number of chromosomes does not change.

Which is not very good.

According to the latest research, all people are 99.9% identical. No matter where you come from, Ulaanbaatar or Nairobi, your genetic code is strikingly similar to that of any other inhabitant of the Earth. Therefore, I wondered if there could be some genetic mechanism to increase genetic diversity that randomly recaptures this 0.1% of our genome, which makes ours different from each other?

Bacteria reproduce asexually, yet they manage to ensure genetic diversity and adapt to the environment surrounding them.

This happens with two mechanisms:

A plasmid is a small, extrachromosomal DNA molecule within a cell that is physically separated from chromosomal DNA and can replicate independently. They are most commonly found as small circular, double-stranded DNA molecules in bacteria; however, plasmids are sometimes present in archaea and eukaryotic organisms. In nature, plasmids often carry genes that benefit the survival of the organism and confer selective advantage.

some classes of plasmids encode the conjugative "sex" pilus necessary for their own transfer.

Your humans can use a similar mechanism: though they reproduce asexually (thus not using two gametes), they can still exchange genetic materials with other specimens. They will use the modified genetic code resulting from the exchange to produce their offspring.

This can be a social ritual, similar to what hand-shaking is for us.

You can have meioitic shuffling of the chromosomes and stop short of making haploid gametes. 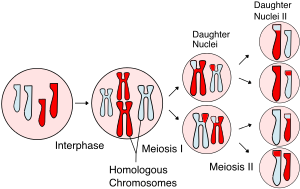 During this time, homologous chromosomes pair with each other and undergo genetic recombination, a programmed process in which DNA may be cut and then repaired, which allows them to exchange some of their genetic information

After meiosis 1 there are 2 daughter cells. They have the genetic material of the parent but it has been shuffled. Meiosis 2 produces haploid gametes and you don't want gametes so your process stops after meiosis 1.

The daughter cells of meiosis 1 are each different from the parent. Each is a diploid cell. In your world each daughter goes on to form an embryo.

An XY male human parent would produce daughter cells that were XX, XY, YX and YY. YY is nonviable so a male human would statistically be twice as likely to produce a male than a female. XX female parents produce all XX female offspring which offsets the population wide imbalance in favor of females.

1. Asexual is ok when you need to expand the population fast.

In a colonization scenario you need a lot of organisms fast. Entities capable of asexual reproduction use that mode when circumstances are favorable, to expand their numbers quickly and take advantage of resources before competitors can.

For example a mutant plant might colonize soil too alkaline for its ancestors, or certain humans might survive tuberculosis because of a different mode of inflammation.

Not the answer you're looking for? Browse other questions tagged biology creature-design hard-science or ask your own question.

2
Biology of hermaphrodite species
0
How to maintain asexual lineages in plants for millions of years while maintaining real-world assumptions? (non-microbial)

3
What if a person can bear a child that is genetically identical to its parent?
4
How long will it take to restore genetic diversity if it is reduced drastically in a human population?
33
Lego world. How do they reproduce?
12
How can I explain why my race has genders but can't reproduce?
6
How can I use magic to make this change in human reproduction feasible without hurting genetic diversity?
2
How can a one-gender humanoid species reproduce quickly?
6
How could a wolf-man be explained without magic?
5
How relevant is new genetic diversity for plant/animal populations badly bottlenecked several centuries ago?
11
How can I maintain the demigod powers of my clan while ensuring the purity of its bloodline?
41
How realistic is a genetic memory?