Is there something wrong with my fictional lighthouse?

I'm writing a story of a fictional location on Earth, or a very Earth-like world, perhaps set in the late 1800s, or at some point when lighthouses were still in use.

It's located on the Eastern end of my fictional island. It's standing on a mountain-like area, perhaps 10 meters over the water level. There are some rocks nearby in the water, but it's not extremely dangerous waters.

I'm basically wondering if lighthouses had to always be placed nearby very dangerous waters, or if they also were used as a general "visual aid", perhaps even without there being any real harbour nearby, just for the sake of being able to make maps with the lighthouse marked out, which they can see far away even if they are just passing by.

I also wonder if there's something that makes its location in the East unlikely/wrong. I don't want to end up realizing later that all lighthouses are always in the South or always in the North or always in the West or something, and that they were only placed where there are massive dangerous underwater rocks which the lighthouse has to warn about, etc.

A bit to the North (well within sight, perhaps 1-2 km distance), there is a larger island or land area with mountains/forests/a beach.

Does my fictional lighthouse/island seem reasonably realistic? I imagine that it may be located near Scotland or England or something like that, but I don't want to specify the exact location since it's supposed to have some fantasy/mystery elements, but still be based on "logic" from our world.

Lighthouses don't necessarily mean "stay away". They can also mean "you are here".

Your setup is fine if:

A lighthouse gives ships a directional heading and approximate range to a known point allowing some accuracy of navigation. By cross referencing the light with a map, the ship can find its position.

By knowing its position, it can avoid obstacles. Those obstacles include land the lighthouse is on. But may also be dozens of kilometers away.

A lighthouse can also be used as a navigation marker in safe waters. "Turn here to get into the port" or "this way back to shore in a storm" for a fishing fleet. These can obviously be on any side of an island.

Here is a nautical chart of a random bit of Scottish coast: 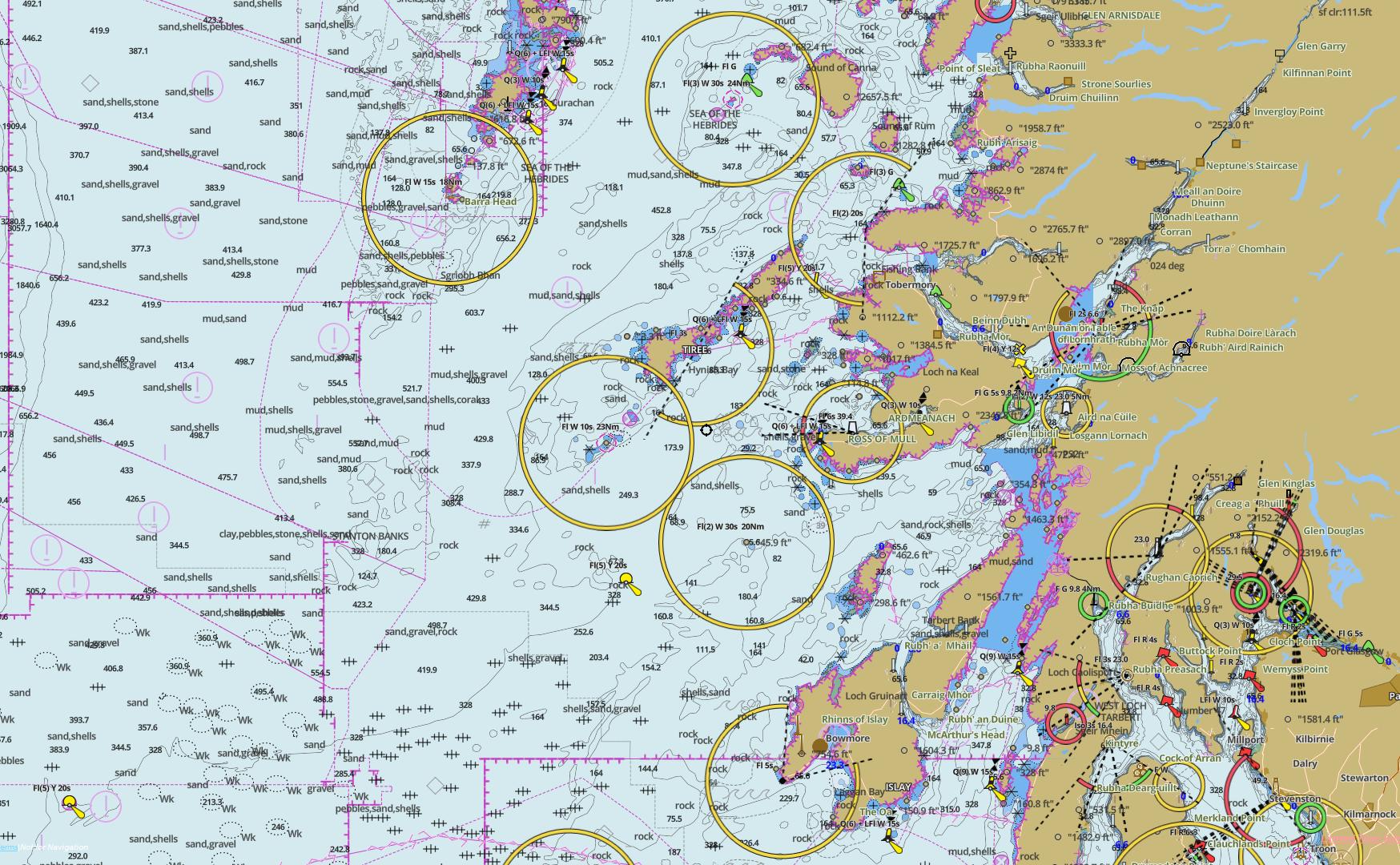 You see all of those coloured arcs and circles? Every single one of those is a lighthouse or similar (there's also a bunch of smaller buoys with lights on marked - I make it 45 in total between the two categories).

You'll also notice that none of those lighthouses have any wrecks at all marked near them (there are some on this screen, but they're all clustered around the SW corner). This is not an exceptionally dangerous area of coast - you'd see something similar in a whole lot of other places.

So yeah, lighthouses are everywhere, for a wide variety of reasons, most of which have nothing to do with specifically marking the most dangerous part of the coast.

Lighthouses are not cheap, quick, or easy to build or maintain. Because of this they are only likely to be situated where they're going to give the most benefit

So what benefit does a lighthouse give? It's a big light, that can be seen at a great distance. You can (and usually do) also have shutters rotating around to make it appear to flash in different patterns, and have filters to make it appear different colours in certain directions

Some of these patterns have specific interpretations. I.e. 2 quick flashes every 5 or 10 seconds is an isolated danger mark, often used to mark small rocks or submerged wrecks. If you see one of these, you just don't go near it and you're good. Another common pattern is that of a cardinal mark which tells you to stay a particular side of the light. As your lighthouse is on the Eastern tip of your island, it would likely be an East Cardinal Mark, which would flash bursts of 3 flashes, warning people to stay East of it (North Cardinals flash continuously, South Cardinals flash 6 times possibly followed by a long flash, and West Cardinals flash 9 times)

If none of those apply, you can still take a bearing from the lighthouse to try and get a fix on your location. You get your compass, measure the bearing to the lighthouse and use this to draw a line on your chart that you know you're on, with another light you can get an approximate position (more lights will generally give you a better and better estimate). Knowing your position is always useful, and historically was a necessity for navigating narrow channels after dark (nowadays these channels would have electrically lit buoys marking the edges of the channel making regular fixes less necessary)

I also mentioned that you can add filters to make the light a different colour in certain directions. This is important because getting an accurate bearing at sea is tricky. Your boat may be rocking or rolling, or being smacked by waves making it hard to keep your compass steady, and if there's a lot of iron onboard the ship (obviously less of an issue historically than with modern steel ships) this can cause magnetic deviation (where the iron onboard the ship bends the magnetic field lines resulting in compasses not pointing as expected) which requires careful calibration to properly account for, and in general you also need to account for magnetic declination (the fact that whilst charts are made with respect to true north, the compass reads magnetic north, which also moves) which requires a fairly easy calculation to account for, but one which people will inevitably occasionally mess up

So, if you have a narrow channel, or harbour entrance that you want people to be able to follow, you can arrange your light at the end of the channel or entrance, with the filters set up so that it appears white if safely in the channel, red if too far to port (left) as facing the light, or green if too far starboard (right) as facing the light. As these filters are fixed on land, they can be set up very precisely and their usefulness won't be as affected by strong weather or local magnetism on the ship

Another common technique here (especially for particularly narrow channels), is to use transits, where there are two lights set up, a low one at the end of the channel, and a higher on further inland. These are set up so that, whilst on the channel the higher light appears directly above the low one, but they'll be out of alignment if you're not in the channel. If you're too far to port (left) as facing the lights the top light will be to the lower light's left, and if too far starboard (right) as facing the light the top light will appear to the lower light's right (colours are reversed I believe in the Americas and Japan, because they're buoyed focussing on leaving ports rather than entering them)

This is just a quick rundown of how navigation lights work, but hopefully gives you an idea of why they're not just for putting on windswept rocks, and your location is a perfectly plausible location for a lighthouse (unlike for instance an straight section of deserted coastline)

The patterns I've listed here are the modern standards regulated by the International Association of Marine Aids to Navigation and Lighthouse Authorities (IALA, after the previous name which left out the middle bit) which was founded in 1957. Obviously your world wouldn't be quite the same, but in an area with substantial hazards or shipping, there would likely be equivalents of the early Lighthouse Authorities (e.g. Trinity House, founded in 1514 originally for managing the Thames but now covering all of England and Wales, the Northern Lighthouse Board, founded in 1786 managing Scotland, even though at the time it only had a handful of lights, and the Commissioners of Irish Lights, also founded in 1786 and managing all of Ireland, and doubtless examples from outside the UK)

In particular, whilst the categories of mark are likely to transfer fairly well (ones for marking isolated dangers, dangers to stay a particular side of, general location, and sectors are fairly natural once you've developed the technology for such flashing lights and colours), the mnemonics the patterns reference will likely be different. The flashes of cardinal marks in our world references a clock face, so in your world, if clocks are different, so might the cardinal marks be. Or you might use a different mnemonic altogether (if your culture associates colours with cardinal directions, your cardinal marks might be coloured to match). Likewise we have a consistent port (left) is red, and starboard (right) is green colour scheme used in sector lights, lateral marks of channels, and lights on individual ships. In your world, to the extent this is standardised (which would likely not be a huge amount), the colour scheme is likely to be different

Not an answer but...

...They don't build light houses anymore, but as other answers point out, navigational lights -- typically supported by slender steel masts -- still are very much in use today.

Classic lighthouses typically used a large whale oil or kerosene lamp for the light source, and the keeper was needed to keep the burner in good condition and, to work a pump to bring the fuel up to the lamp and possibly, to pressurize the fuel.

You could put it anywhere you want really, because people make things with the best of intentions but are sometimes wrong, especially in times before computer modelling where you couldn't get easy feedback on an idea.

Take the old lighthouse on Lundy Island in England as an example.

They built it at the highest point of the island but this meant that the majority of the time the actual light was obscured by fog to those at sea level, making it functionally useless.

This does give the lighthouse a story which makes a bit more interesting, more to write on the plaque inside than if it was retired just for being old.

Not the answer you're looking for? Browse other questions tagged earth-like geography geology earth history .

5
How would the ocean currents of earth be altered if there was no Central America?
8
Is there anything wrong with my plate tectonics map?
6
What's wrong (if anything) with the tectonic plates on my fictional planet?
14
Where should I place my fictional continent in the South Pacific?
0
Naturally altering the climate in order to create lush areas in a wasteland - Is it plausible, and if so how?
26
What would keep traders away from a specific area of the ocean?
14
Reasons for a very small but very high mountain range in an area with no plate boundaries?
6
How plausible is this volcanic eruption event? Dark Age without total extinction of Stone/Bronze/Iron Age people?
3
Any advice on what is a realistic way to use plate tectonics to create landmasses and barriers?