How heavy can my wooden trains get?

A few generations back Her Glorious Majesty decreed the creation of the Imperial Rail Ways.

Now, you might immediately think of steam trains and steel rails. Stop that.

See, Her Majesty ruled over a large, mostly flat forest with very few rivers (but excellent groundwater thanks to a system of subsurface caves and aquifers). Moving freight from her more remote dominions to the Capital was tricky (even by road). Other kingdoms move such loads via river or canal barge, but sadly the geography in the heart of the Empire does not support doing this.

The relative abundance of wood and able carpenters meant that laying wooden rails and pulling dedicated trains of wagons with specific gauges (width between the wheels) and flanges or grooves (that keep it on the rail) across some regions was a reasonable solution (plus having a nice flat road with an easy way to pull wagons of supplies doesn't hurt troop movement).

These wooden rails have since become more and more convoluted and complex and entire shunting yards made of nothing but hardwood and polish exist in some cities. Nowadays the rails are maintained and kept clear of debris by the wagon teams and dedicated Imperial carpenters. Power for the trains used to be provided by animals walking in front of the wagon trains but (since they still needed to stop for food and rest) is now provided by Locomotive Galleys.

A Locomotive Galley is, in its simplest form, a handcar. Handcars are simple contraptions with a reciprocating arm fastened to a wheel and a lever. When the lever is pushed down/pulled up at the right time it pushes the wheel around. Needless to say Locomotive Galleys are more complex. Selectable gearing, a roof and a dedicated crew tender wagon means that an Imperial Locomotive can keep rolling day or night and deliver goods across vast swathes of the empire. They are almost entirely wood, as although metal may be used for certain key components it is hand-crafted and generally hard to replace (no industrial metalworking yet).

The question is just how large these Locomotive Galleys can be built and how long the trains they pull can be before the wood, rope, or men that comprise the train give out.

The technology for bogeys onto which the wheels can be put exists and allows for long locomotives (although I think the driving wheels must be fixed, given the constraints of carpentry). Wooden gearing exists that can be used to down or upshift the torque, though the more force is needed the heavier the wheels will become. If needed a canvas 'bike chain' can be used between two gears. A carpenter will always be present on the train to effect minor repairs and maintain the woodwork if needed, and there is a gratuitous supply of lard available to use as lubricant. No meaningful gradient is expected on the rails.

The engine can be given a starting push by any number of crew at a station but must be capable of continuing to move using only the power of the men inside, and minimal metalwork is preferable (for example an answer using only wooden axles will be preferred over one with metal ones, as long as the friction between axle and locomotive won't cause the whole thing to burst into flame). The technology level is roughly High Middle Ages (1000-1400 AD) and Western European though I'm happy to have some small innovations here and there (for example the Empire uses standardised intermodal shipping crates, a highly unusual concept for medieval times)

Added details: I’m aiming for 100 miles per day, or a sustained 5mph with some station stops. Obviously if I can’t make my trains big enough to carry their own food/replacement crews this number will have to come down, but I’m more worried about mechanical stresses under constant load than I am high accelerations. You can also assume the rails are made of a harder wood than the locomotive itself, so any failure points will be in the train rather than the rails.

Basically: How big can a train made primarily of wood, rope and sheer bloody mindedness get?

You would not use Rails, but rather flat Tracks. Some people call them Roads.

Metal rails make sense, because the compressive strength of iron/steel is very high, making a rail track with a head width of 3 inches easily capable of supporting 20 tonnes.

Wood, in any form, simply will not be as strong.

So, make your wooden railway a wooden road. If you wish, with a wooden guiderail(s) to keep the train centered.

And yes, wooden wheels are fine, as long as you have something stronger than wood for the axles and bearings. And make your wooden wheels wide. Cylinders, not cookies. Think Fred Flintstone's car, just make a better axle.

Wooden roads are nothing new, there is even a bit of one left out in California. 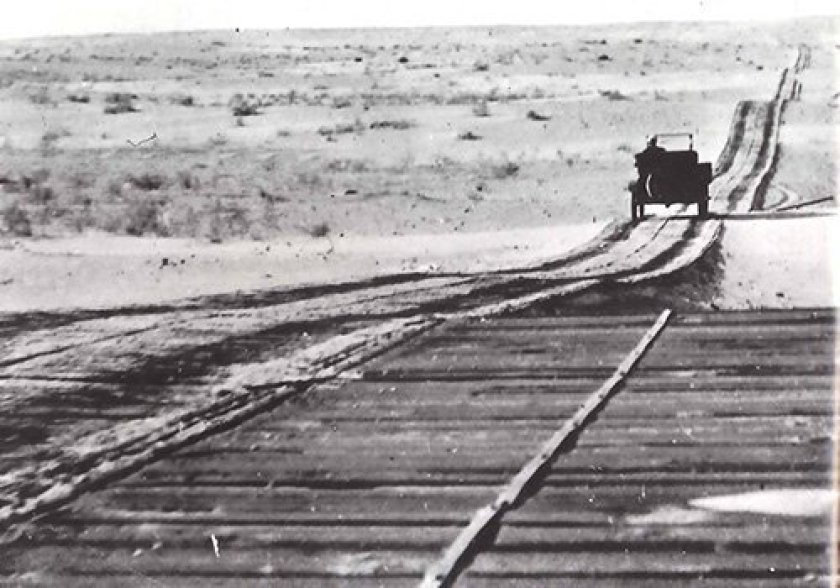 How heavy can your trains get? Just keep the wheel contact area and loading such that you do not exceed the crush resistance of your rail. For oak, something under 4000PSI is ok. It would help, a lot if your wheel or the road surface could be covered in something resilient. Like vulcanized dried tree sap. Whatchamacallit..... ah, yes, Rubber. :)

To allow a heavier load, just add more axles, or widen your train car's stance. You are making the wheel so it contacts the entire surface under axle, after all.

There is really no limit if you design the train in a manner that avoids the two problems associated with wood: the bearing strength of wooden rails & wheels, and the tension strength of the couplings between cars.

The first problem is easily addressed by limiting the weight of any single car. For the second, you do what modern railroads do, and use distributed power units.

You probably think of a conventional train as a locomotive up front pulling a string of cars, but this limits the number of cars to the strength of the coupling between the first car and the locomotive. The solution - which is used in freight trains in the western US (and perhaps elsewhere) - is to distribute several locomotives along the train, at the head, tail, and in the middle: https://gorail.org/infrastructure/nuts-bolts-why-is-there-an-engine-in-the-middle-of-that-train

That just leaves you with the problem of frequently replacing rails & wheels as they wear, but that's just a cost & manpower issue.

PS: The wooden gear problem mentioned in a comment to the question could probably be solved by using belt drives. Metal gears aren't all that great for rail use, either, which is why most modern locomotives (if not pure electric) use diesel engines to drive electric motors.

Start with “Power for my people’s trains comes from handcars…”

On Builtworld, anything half-way sensible should go, unless you spend too much time on detail… though of course, “mostly flat” matters more than much of the rest…

On Builtworld, anything more than a few dozen workers should be able to get the job done because so long as the description seems half-way realistic, most readers/viewers will never consider the details. Reality is not needed in Worldbuilding.

In reality, though, Stanford University tells us an average human produces perhaps 100 watts of energy at rest - about the same as a standard light-bulb - can comfortably sustain 3-400 watts while working and while pushing it, perhaps 2,000 watts… most of which goes into running the body, not useful output.

Why not start at 2,000 watts per worker and modify that to suit your scenario, remembering that here in the UK 1,000 watts is the standard power rating of a single element in a domestic electric heater?

Google tells us that 1 kilowatt equates to 1.341 horsepower. For contrast, the average domestic car offers about 120 horsepower, and a diesel-electric locomotive might use around 3,000 hp, or 2,200 kW, and up.

Quora suggests mostly flat track might require 0.5 horsepower per ton, so a 3,000 HP unit could haul 6,000 tons but humps might double the power needed, so halving the load capacity. (I don’t mind whether those are UK, US or Euro tons)

If each worker puts out about 2,000 watts, your Queen Empress's3,000 hp, or 2,200 kW, might need 1,100 workers pumping the handcarts, before you get into reducing the output according to the weight of workers and their handcarts…

Average human body mass, globally, is 136lbs or 62kg. For the wagon weight, why not ask Google or any freight company? Now consider Hollywood’s images of workers pumping handcarts and why so very rarely those handcarts pull trains…

Whoever heard of a any train carrying its own food or replacement crews, let alone a hand-cart train? Why would food and crew not be available at scheduled stations?

How could your hand-carters ever produce “high accelerations”?

Not the answer you're looking for? Browse other questions tagged medieval materials or ask your own question.

22
How large can a medieval Empire conceivably get and still be considered a single political entity?
11
How can infantry and light cavalry defeat heavy cavalry in a valley?
61
How would a medieval city get cold drinks?
2
Heavy, immutable steel: armour design
10
How early can transparent glass windows be easily available?
6
How to get raw materials from a water based world?
3
How big could dinosaurs get with super strength and durability?
5
Maximum Size Limit for a Wooden-and-Bamboo Neo-Ziggurat
9
How long can a wooden door last?