How would a torus planet's magnetic field work?

Simply put as the title says. I'm going to handwave that the planet is held together with magic, but I want to know how a magnetic field would work on a toroidal planet- assuming such is even possible. Specifically, I want to know where a 3D compass would point based on where you are.

I see a few possibilities: 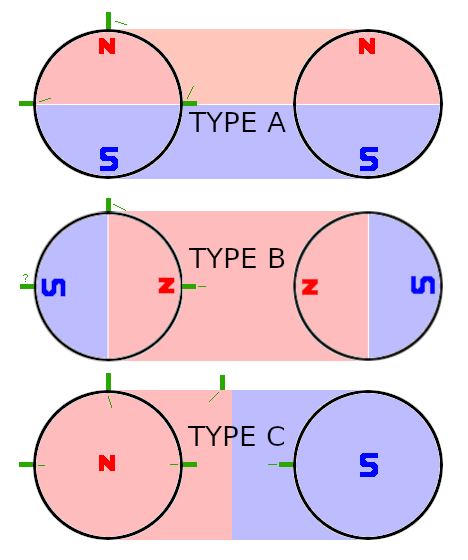 Are any of these impossible? (As in, would it likely collapse into no magnetic field, over the course of a few billion years? I dunno much about electromagnetism so I don't know what causes magnets to lose charge.)

Is my understanding of where a compass would point given your position, correct?

If you're in a Type B torus planet, I think if you're on the outer edge, your compass would point somewhere in space, repulsed by the south pole. Is this correct?

I think your interpretations as to where a compass would point are correct, except for on the side of type B.

A tool that may help you, to know where a compass would point, are field lines (for magnets they are defined as the direction opposite to where a compass points) they are used in physics to help visualise a variety of fields (including magnetic fields). A quick google gives images like those below (sorry about the sizes), the first image is what I think it would be like for type A, the second is for Type B... 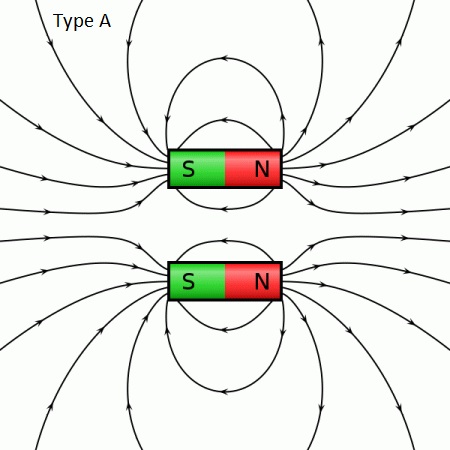 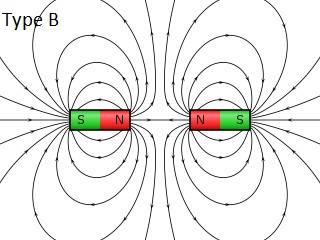 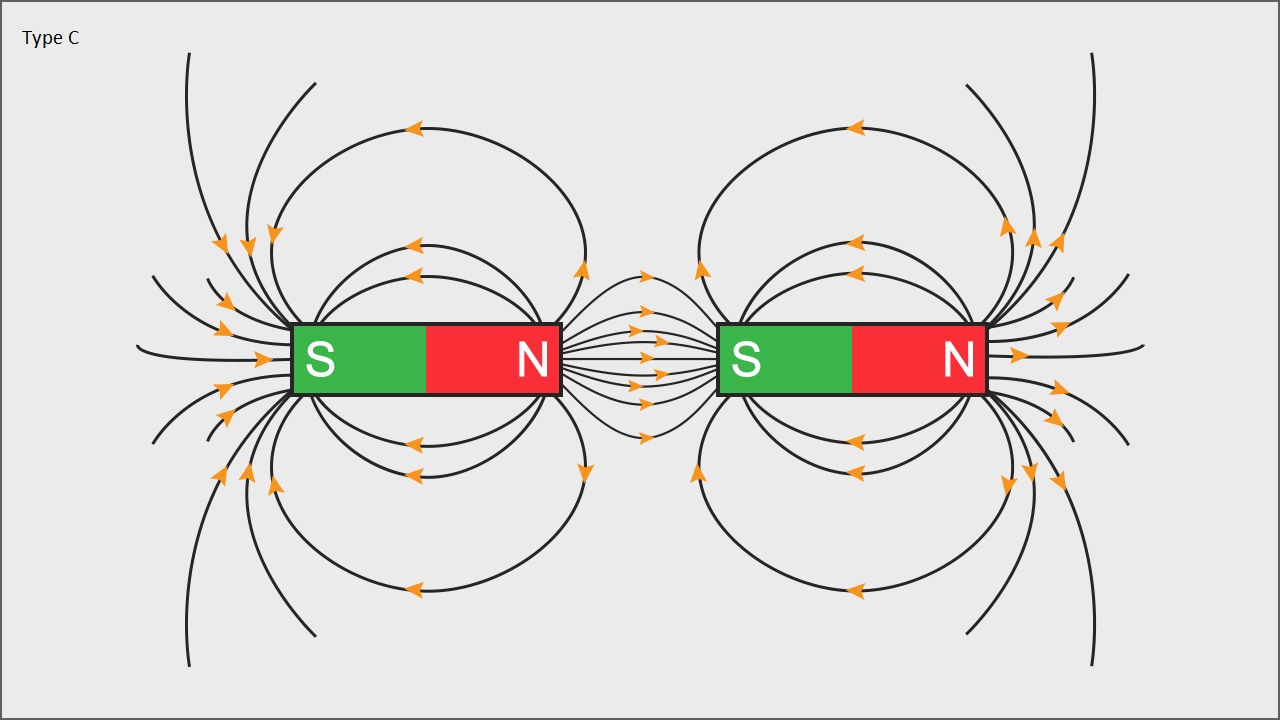 They confirm your compass predictions, except on the side of type B, at that point the compass points to the outer edge.

The theory of the earths magnetic field is that it is caused from currents circulating in the earths core, non of your types could be possible through this method of magnetism. But I think your planet could have two possible magnetic fields from this method, shown below (hopefully the image is clear enough). One has the compass always pointing around the torus, show in the upper image, where the orange line is the direction the compass would point. The other way is where the compass would point towards the edge on one side, and towards the centre on the other side, it is the lower image. 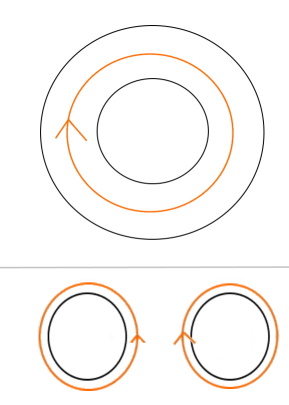 If you want the types of magnetic fields you give, you planet probably wont have a liquid core (ie no magma) and would have to have large quantity of magnetic minerals (like Magnetite), which are only magnetic when solid.

Our current model for the generation of magnetic field on Earth postulates that it is produced by the motion of the fluid iron-nickel core at the center of the planet.

Therefore just on the base of symmetry considerations, I would rule out types B and C, because they would not be fitting the circular symmetry of a torus, and whatever is producing the magnetic field has to be in the torus.

Moreover type B is even physically impossible, I think, as the two similar poles facing each other would not like that configuration and repel each other.

In configuration A I guess a compass would point somewhere along the central axis of the torus. For a more precise statement I would need physics knowledge which are beyond me.

As it stated in the other comments magma fluid and rotation of the torus shape has huge efffects on the magnetic field. But in most likely cases the magma fluid inside the torus will not only rotate around its center, but also the fluid will rotate in the clyindrical core of the torus. This particular shape and type of flux will lead the magnetic poles to point a specific line on the torus instead of a point. I have found this website to illustrate a possible magnetic north line:

What you probably want to check the cases w1/w2 having an integer ratio to simplify. Non integer ratio of w1 and w2 would be hard to imagine. I have set w1=3, and w2=1 and obtained this results; 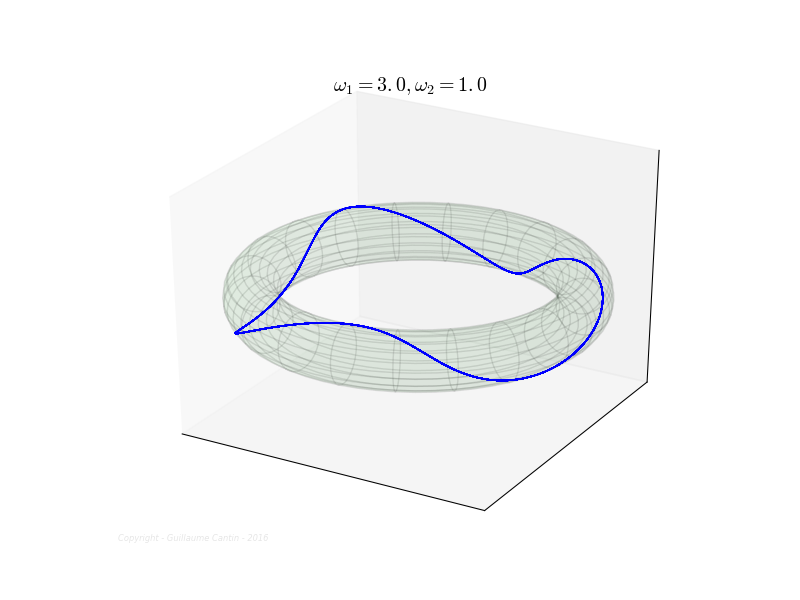 Blue line represents a magnetic north pole line and you can imagine a magnetic south line that is phase shifted respectively.

How would a 3D compass work in this case?

This is not so easy to answer, unlike what we used to have in our planet, this magnet does not have a stationary north/south face but it has a direction flowing determined by the flow in the magma. When you are on the surface your compass will point a general direction towards to north pole line but when you are following you are not only walking in the cross section but moving clockwise (or counter-clockwise) on the torus.

Some factors to decide this are: 1-the torus has fluid magma inside. 2-the torus rotates (likely) 3- where there are heat differences within the torus.

This will determine the shape of magma movement, and convection cells within the torus.

If there is bulk rotation around the torus (or direct current running that way), then there will most likely be a field like example C. This would be stronger near the hole and weaker on the outside, but following the compass north will lead you in a neat "small" circle. Going at right angles to magnetic North will take you on a "large" cirlce.

Not the answer you're looking for? Browse other questions tagged planets electromagnetism .

12
What would make scientists realize that they are on a toroidal world?

9
What Effect Does Moving the Magnetic Poles of a Planet Have?
33
What would the problems with / consequences of a torus shaped planet be?
3
Would a very heterogeneous planet be spherical?
1
Would a planet be shaped any differently if it has a single non-dipole?
12
What would make scientists realize that they are on a toroidal world?
4
Could plant life evolve on a world with a toroidal magnetic field?
10
Can the Meissner effect explain very large floating structures?
6
How could you build an artificial planet-sized magnetic field?
3
What (if anything) can cause a substantial and stable shift of the magnetic poles of a habitable planet away from its geographical ones?
1
Two celestial bodies tidal locked - not with the sun