Setting: a large sea that can only be accessed through a waterway. The waterway is about 15 by 15 kilometers but blocked off by a giant wall stretching from nearly one side to the other that is about 50 meters wide and twelve meters high. The lake contains several islands that together are the base of an empire. Lands surrounding the sea are infested by zombie-like creatures making them uninhabitable.

The purpose of the wall is to (obviously) block incoming ships. The hostile ships are mainly (European) enlightenment era ships but instead of cannons make use of ballistas (and on rare occasion trebuchet like weapons). Their enemies also have airships, but are hesitant to use them seeing they are rather vulnerable (hydrogen based) and are unable to carry siege weapons and are therefore dependent on simple archers.

But due to their rather unfortunate surroundings they require the wall to have a gate so ships can pass through for trade, and they also have colonies outside of the sea so it requires openable gates for ships to pass through.

Their technological level varies between early 1800's and early 1900's (early stages of electricity, but still mainly reliant on sailing ships, no power tools). And they had over 300 years to build the wall while having to deal with few hostilities (the enemies they did have were not able to reach the construction site).

The islands contain the majority of the empires population and ruling government. Resource wise it is a huge investment but doable. Most of the world is unexplored, from what they did explore there are two rivaling powers. One nearby in which they are in a cold war with and one far away (months of travel).

The wall also has several ships protecting it.

So here is the question, would such a construct be feasible? And what would they have to consider while building it/making it as good as possible for the purpose of blocking a potential invasion fleet.

Something similar has been done with a chain. 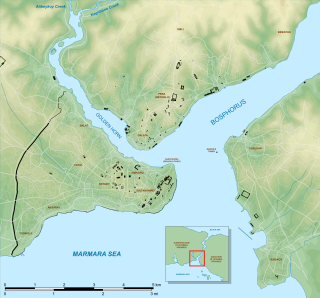 Here is the Golden Horn, the 750 m wide mouth of the Bosporus river leading to Constantinople (now Istanbul)

And a chunk of the chain that stretched across it starting in the 700s. 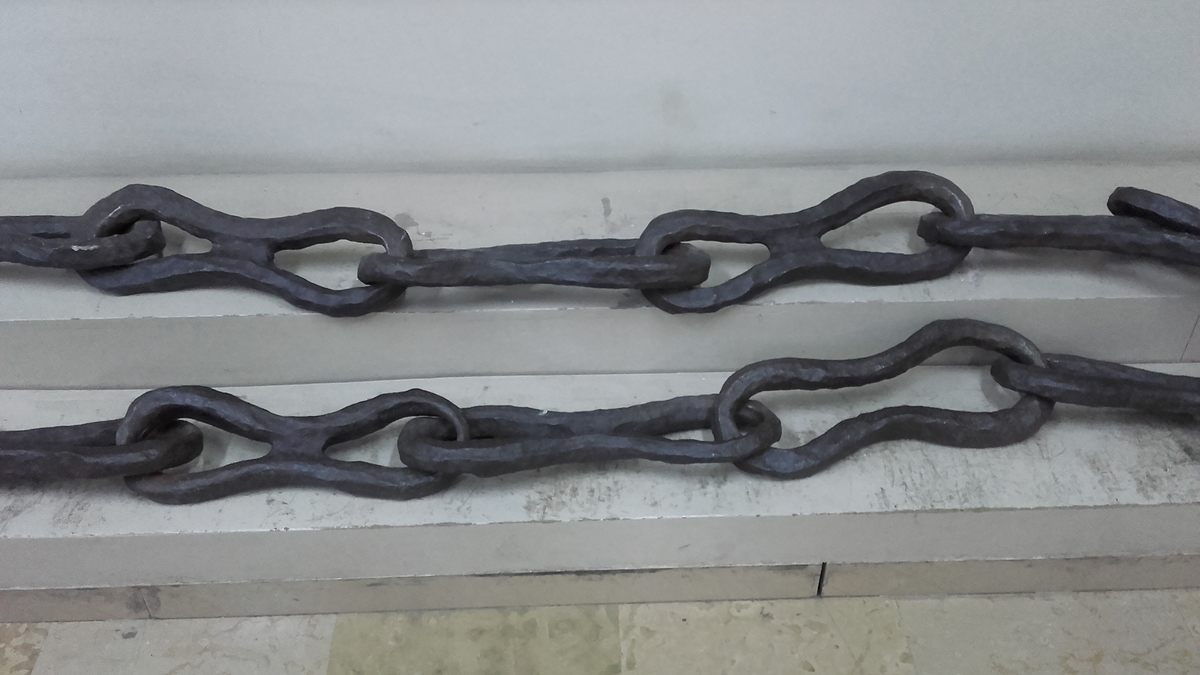 Chains across waterways were done lots of other places too, including the Hudson River chain during and after the American Revolutionary war. There are chunks of that chain on display at West Point.

A chain as long as what you propose would be a trick, but a 750 meter chain is pretty long too. It had floats in the middle.

Benefits of a chain over a wall

At the end of the day, water moves and walls do not. Water will need to move past the wall somehow and it will batter the wall during storms. 7 km from shore is basically open ocean. Walls must rest on something deeper which means pilings. Maybe one or two to ford a river, but even though it was proposed by Leonardo DaVinci no-one built a bridge across the Golden Horn until recently.

I would call building a wall across 15 km of open water a herculean effort but I don't think even Hercules would take that on.

If you are dead set on a wall, maybe make the opening more the size of a river mouth than the Straits of Gibraltar.

A 15 km wall is unrealistic.

A chain is more feasible, but not that long, because it only needs to be blown up at one or a few points to be useless so your ships would be strung out defending the chain while dependent on oars and wind to manouever. During the Napoleonic wars they dealt with chains like that.

Your best option is to fortify islands with artillery and then chain between them. This would enable you to concentrate your defences. Depending on the depth you could sink stuff to rip out the bottoms of enemy ships that do not know the safe way through.

Many places are like that right now. They have safe harbours, but only if you know the passage through reefs, sandbanks etc,. So in my country they have coloured poles with lights on showing the direction a ship needs to travel. Remove the poles and there would be all sorts of havoc.

Yes - you can do this with early steam power.

Late 1800, early 1900 we had a similar megaproject take place on earth. The Panama Canal. We had steam shovels and railway carts, allow for excavation and muck transport at high speeds. This project is comparable in scope. That project also included loch doors, big water-tight doors in deep water allowing boats in and out, which are your doors.

You have steam shovels digging up rock / dirt / etc, loading them onto rail cars. Which take them to the coast, and dump in the sea. As the surface rises out, you have it packed in by steam rollers, and then extend the railway out onto the newly created land.

As you go - dump big rocks on the ocean-facing side to act as a water-break to help dissipate the energy of incoming waves (and break the boats of anyone who tries to land on your newly created isthmuses).

Over 5000 people during the construction of the panama canal, mostly tropical diseases but industrial accidents were common. Your project will be possible, but there will be a death toll for its construction.

Assuming your waterway is not too deep, it is comparatively "easy" to build that wall. Just quarry some rock, cart it in, and dump it in the right place. Face the edges and top with neater blocks to form a wall rather than a mound.

But it will be a HUGE undertaking. A 15km long wall, 50m wide and 12m tall. Let's say its over a very shallow lake of only 3m depth. With a solid, unyielding bottom that is not mud but something strong enough to carry thousands of tons of rock.

Not the answer you're looking for? Browse other questions tagged reality-check construction .

3
Culturally Correct Wall design
7
How a giant floating landmass might affect the weather?
39
What difficulty would the Roman Empire have besieging a fantasy kingdom's 49 m wall?
6
How would a human society in the Age of Sail be affected by the existence of a portal network?
35
Is an economy based on piracy possible?
2
How to make my motorcycle rider survive driving into a wall?
4
Is it realistic to have a sound-based naval identification system?
5
Putting locks on a strait between the sea and a large bay to prevent tides