How would quadrupeds dance?

Yet another odd question. Now, in one of my worlds, I am creating cultures for cats with human intelligence, but this question applies to essentially all quadrupeds. I wanted to introduce dancing into their culture, but this brought up the question, how would quadrupeds dance? Perhaps spinning little circles or intertwining tails, but I want more than that. I'm asking specifically for cats, who don't have much of a physical difference from cats in our world (Except mildly opposable thumbs, their shoulders are a bit more mobile, and they can stand on their haunches like bears), but feel free to broaden it for people asking this or similar in the future.

And, if you need the definition of dance, either "A series of movements that match the speed and rhythm of a piece of music." or, even better, "Dance, the movement of the body in a rhythmic way, usually to music and within a given space, for the purpose of expressing an idea or emotion, releasing energy, or simply taking delight in the movement itself."

We are not acknowledging the fact that real cats cannot 'sing' or make music, this is fiction, they can sing in any style they want and play instruments by my rules. It'd be off-topic anyway.

First, let's examine some dances that humans do but that cats probably can't:

Now, let's look at some advantages cats have:

Finally, with advantages and disadvantages in mind, here are some dance scenarios I can think of: 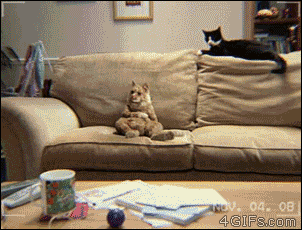 They would be able to do social dancing like Scottish Country Dancing, Ceilidh dancing or Reels.

Using their tails to connect with the other cats instead of taking hands would work perfectly well.

Not the answer you're looking for? Browse other questions tagged biology culture species or ask your own question.

4
How would cats navigate oceans?

1
How would having weird eye lenses affect a species' ability to understand geometry?
6
How long would gestation period be for dwarfs?
9
How do wraiths control their bodies?
4
How long would it take for segregate human populations to speciate to a point where they could not interbreed?
5
How can I increase brain processing capabilities without overloading it?