Can facial Nerve damage cause all facial functions to shut down (temporarily)?

So I'm writing a character that cut his face very deep making a big x mark on his face at some point in the past to scare off a couple of thugs. He survived the ordeal, but now it so happens that everyone now and then, all his facial functions shut down mid-speech as a side effect of him cutting up his face. For example He could be sitting in a chair talking to someone and then next thing you know, his head slouches and it looks like he fell asleep. What happened is that, his eyes, mouth and all face muscles shut down for a few seconds to minutes. Then he wakes up.

This is a fantasy story, but at least I'd like to cross-check if this can happen in real-life.

My question is, Can trauma to the facial nerves cause this kind of thing to happen to a person?

As someone who has had facial nerve paralysis. Not like you've described.

Facial nerves are grouped together, so tend to seize up and become restored in groups. 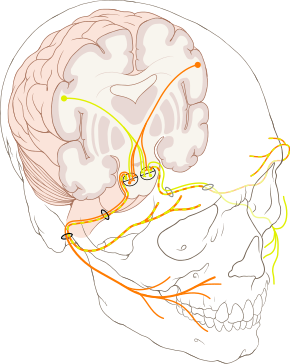 The neck, shoulders, and jaw muscles are routed through an entirely different path to those controlling facial expressions.

If he damages that nerve on one side, he'll get Bell's Palsy. I had a swelling at that tiny hole where all the nerves pass together, and gave me 3.5 weeks of:

I do still get spasms a few months later. But it's more like "5 unexpected winks" rather than anything that severe. The eye chain recovered enough to shut the eye in 8 days. Was still slurring partially (as the lip ones took the longest to recover) for nearly 4 weeks.

To get total muscle seizure on both sides, he'll need to damage 4 places on his face, cutting those yellow lines, or 2 places at the back side of the face where they group together going through that hole.

You describe an absence seizure. https://en.wikipedia.org/wiki/Absence_seizure

The hallmark of the absence seizures is abrupt and sudden-onset impairment of consciousness, interruption of ongoing activities, a blank stare, possibly a brief upward rotation of the eyes. If the patient is speaking, speech is slowed or interrupted; if walking, they stand transfixed; if eating, the food will stop on its way to the mouth. Usually, the patient will be unresponsive when addressed. In some cases, attacks are aborted when the patient is called. The attack lasts from a few seconds to half a minute and evaporates as rapidly as it commenced. Absence seizures generally are not followed by a period of disorientation or lethargy (post-ictal state), in contrast to the majority of seizure disorders.

Nerve damage due to a physical injury is not intermittent as described in the question. What can be intermittent is a psychological issue that might be related to either the self-inflicted injury itself, or the situation that led the character to cut his own face.

Rather than nerve damage (and in fact, he might well have nerve damage, but it would be much more localized, small numb patches, as opposed to whole face or head), what you describe sounds like a sort of hysterical paralysis that might be associated with PTSD, Post-Traumatic Stress Disorder.

Of course, most fantasy worlds don't have a diagnosis (never mind treatment) for that disorder, but none the less, it existed long before the modern definition: the "shell shock" of the First World War was a version of PTSD, as was the "thousand yard stare" of the Second, and symptoms that fit were described even in Napoleonic days, though in that time and society it was often labeled as "cowardice under fire."

As the other answers point out, it's not very plausible that cutting one's self could cause this kind of symptom. At least not on it's own, but you might consider adding in some other factor(s).

One idea could be that the character had a latent neurological condition that affects his face muscles in this way but it requires a specific pain stimulus to trigger - which his facial scars occasionally provide. I'm thinking in the realm of conditions like epilepsy where certain stimulus can cause the brain to temporarily malfunction. Although it might seem like a big coincidence for this specific person to have such a condition.

Another idea would be to propose the existence of a particular microorganism / disease which has the desired effect and which the character became infected with at the time he cut his face due to the blade being dirty or such. Some real-world diseases / infections can have peculiar and intermittent effects with life-long recurrences, so this doesn't seem like too much of a stretch. Maybe mention a few other people with it so that this one person isn't the only one in the world with it, to make it not feel like a huge coincidence. Though if you want to keep it rare you could still say that the disease only exists in a certain region and only rarely infects.

Not the answer you're looking for? Browse other questions tagged science-based reality-check biology medicine or ask your own question.

16
How can someone be invulnerable to any damage down to cellular levels while still having a limited lifespan?
26
Can a human survive acceleration from 0 km/h to 310 km/h, and then back down to 0 km/h, all in 500 meters?