Would dragons with automatic grenade launchers strapped to their backs be useful?

My Dragons: Smaller and cuddlier than their original version (well, most writers copy Smaug to varying degrees). They have long lifespans and human intelligence. They can mimic just about any sound there is (similarly to a lyrebird), along with having great eyesight, smell, and hearing.

They have natural armor around their vital bodyparts, good enough to stop a few high-powered (rifle) rounds, and some of the intermediate cartridges, but a .50 cal can pierce it in one hit.

Dragons have six limbs and are about the size of a larger draft horse. They take off by "pole-vaulting" into the air on their wings. Dragons can flap for 90 seconds at most before they tire out, leaving them to glide at fairly decent speeds (18 m/s) which can be increased when necessary to 36 m/s.

Dragons are more limited in their carrying capacity, so they made lightweight grenade launchers and a harness for it, just for them. Let's use the Mk 47 Striker as our baseline. The most notable change would be the inclusion of an automatized targeting system, so the dragons can focus more on the flight.

This automatized version should still be 18 kilograms in weight, it won't be pleasant for the dragon, but still manageable. Ammunition varies but usually weighs around 0.23 kilograms. 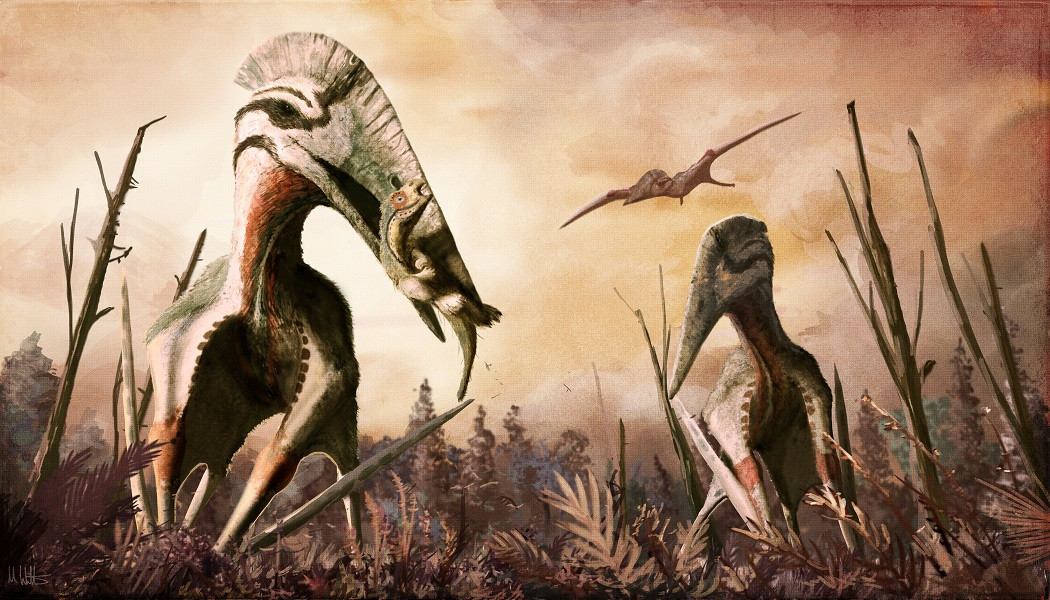 We know of at least one giant pterosaurs, the Hatzegopteryx (see the picture), which could tackle larger prey with its scary neck and beak, implying they could carry at least some of it while flying. So, a dragon's carrying capacity? I would say that 80 kilograms would be reasonable.

On paper, military dragons are classed as infantry and were supposed to be rare but considerably powerful, as:

But could that be the case? I mean, the dragons' main strength was supposed to be them being cheap (as in less powerful and less costly) air support, but would their automatic 'nade launchers be bad enough dudes (well, AI-assisted targeting systems) to offset every other potential weakness to make that feasible?

As described, your dragon is good for armed reconnaissance

The 40mm grenade launcher is hardly artillery, and hardly a bomb, but it can produce smoke or shrapnel rounds at needed, and modest airborne fires. I'd compare it favorably to the 2.75 inch Hydra rocket(Which now has the APKWS kit that offers laser guidance), though it's not quite as good as that.

But the other, major advantage of an armed flying asset for your army is in seeing where the enemy is, and in the case of armed recce platforms, being able to engage their scouts and 'put their eyes out' (hinder their attempt to scout out your forces).

Given its limited speed and range, you won't be doing long range bombing nor interdiction with it. Your dragon is more similar to a light attack helicopter (think Comanche if you have a lot of money, or the original AH-1 Cobra if your budget is less): you can see the enemy and hit them with some firepower, but the heavy hitting is left to your main effort/major units.

FWIW some IRL experience: your AI add-on kit reminds me of the "non traditional ISR" we did during OIF with the F-16 and F-18 targeting pods. They had good enough visual resolution to provide the local commander with actionable intelligence if / when they were not being used to direct weapons. Your armed "precision dragon" could be used similarly.
(ISR = Intelligence, Surveillance, Reconnaissance)

I think the use case for these dragons is wrong. I wouldn't see them as cheap air support but as mobile fire support. They sounds to me like a biological weapons carrier platform. See the British universal carrier or the Wiesel. Not a vehicle type that is widely used currently, but with added flying abilities, probably easier maintenance and lighter logistics demand I do think they'd be rather useful (the Wiesel is generally well liked as far as I can tell). There would probably also be versions carrying AA/AT-missiles.

Take the grenade launcher with AI targeting, forget the dragon. It's big and vulnerable.

A few of those launchers on portable mounts would be highly effective. Use the dragons to emplace them and get out of the area if you're looking for a job for them.

Not the answer you're looking for? Browse other questions tagged science-based military dragons tactics or ask your own question.

26
Are dragons useless when there are guns?

1
How to make powered armor viable as a substitute for guns?
20
How to utilize dragons that are too small to ride in warfare?
3
How could six-limbed dragons launch like vampire bats and giant pterosaurs?
2
A missile that's launched from "small' flying dragons. How can it take advantage of that?
12
Limbs where muscle composition is 90% fast-glycolytic and 10% slow-oxidative. Would it be too specialized to be practical?
3
How could a single dragon pose a threat to more modern human settlements?
26
Are dragons useless when there are guns?
4
What's the scalability of this flying strategy?
4
The best type of reconnaissance for modern dragons?