How might it be possible to move a star?

I'm imagining a super-powerful spacefaring race which has the capability to build or modify a star system or even galaxy by moving stars around, but I wonder if it's really feasible.

Is it theoretically possible to move a star intentionally and accurately from point A to point B? How might this be done? How would it affect anything near the star, orbiting and otherwise?

One proposed method of moving a star is to build what is known as a Shkadov thruster. Essentially, this is a large shroud covering half of the star, which is held up by the pressure of outgoing solar radiation and the solar wind.

Reflecting the solar wind on one side of the star creates a momentum imbalance which, over millions of years, can be used to steer the star though space. 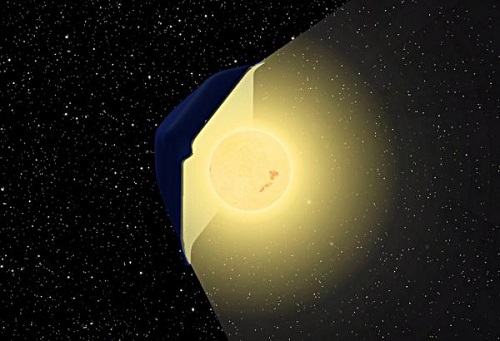 There is the law of conservation of momentum. When you throw something into a star, the resulting momentum is the combined momentum of object and star. So you can change the velocity vector of a star by colliding it with other masses (by the way: the same method works on black holes).

Unfortunately for this to have an effect, these masses must be either very large or very fast, preferably both. Unfortunately, both can change the star in ways you don't want.

Adding more mass to a star makes it burn faster and ramming it with a mass with relativistic speed might destabilize it. We don't actually know much about the inner working of stars, so it's hard to say what exactly would happen, but it likely would not be very healthy for anything orbiting said star. Heavy coronal mass ejections, unpredictable fluctuations of luminosity (up or down) and extreme solar flares should be expected. So when any planets orbiting the star harbor life, they likely won't anymore afterwards.

Speaking of planets: Their orbits will change. Accelerating the star in one direction is equivalent to accelerating everything it orbits in the opposite direction, so the orbits of any planets will likely become a lot more eccentric or the star might even lose some planets or collide with them (this applies to any method of accelerating a star which doesn't also directly accelerate the planets).

Depending on how realistic you want your solution you could have your advanced race use folding space.

Gravity would most likely be able to cross the boundary too so you'd want to choose two areas that had similar "base" gravity. Also, regular momentum and angular momentum need to be conserved (unless they do something else clever).

So moving the solar system anywhere else within our galaxy would be tricky as it would have to be moving faster, slower or in a different direction than originally. Removing the Sun's mass from one part of the galaxy shouldn't be enough to destabilise the galaxy, nor would inserting it somewhere else. The nearby stars would just adjust themselves a little bit although long term the effect would be chaotic, i.e. unpredictable the longer into the future you go, but still stable or non-catastrophic.

You would also have to think about the effects of a gravity "shock wave" when you first connect the two areas of space, and also when you disconnect them.

With something as large as a star - wow. Tricky, and there's also the problem of slowing it down once it's where you want it to be. What would be the purpose of moving a star vs keeping it where it is? One method - rather slow, would be using gravity assists, flying large spacecraft or shooting asteroids or comets around it, either giving the star or taking from the star, orbital velocity around the center of the Milky Way - but we're talking about an enormously slow process.

Another method might be magnetism. If we could trigger sunspots on a star (say by shooting it with electrons in one spot and protons in another spot - oh, say, 10,000 or 20,000 miles away, you might generate a sunspot and coronal mass ejection on one side, and reduce them on the other side using the same method. Enough sunspots on one side of the star would slowly generate movement. There might be other ways to trigger coronal mass ejections - not sure, but that would be one method.

Another method could be to feed one side of the star with a more easily fusion-able material, such as Tritium, or perhaps a Lithium Isotope, which (might) - I don't want to say it would but it might have an effect like throwing pine needles on a fire causing the star to go "whoosh" and shooting more energy out of one side of the star (I'm not sure the specifics how fusion and whether that would occur close enough to the surface to actually have that effect - just an idea).

None of these methods would be fast - but I have to ask - why would you want to move a sun or star? I can see needing to if a star was on a crash course for our solar-system and we might want to move our sun out of the way (a slow process to be sure but if we had 100,000 years warning, we might just be able to do it).

I would say using and then destroying blackholes on the side of where you wish the star to be pulled towards. Even better, it could be a wormhole where the material and light being sucked in on the one side, funnel back out on the other side for both a pull and push. 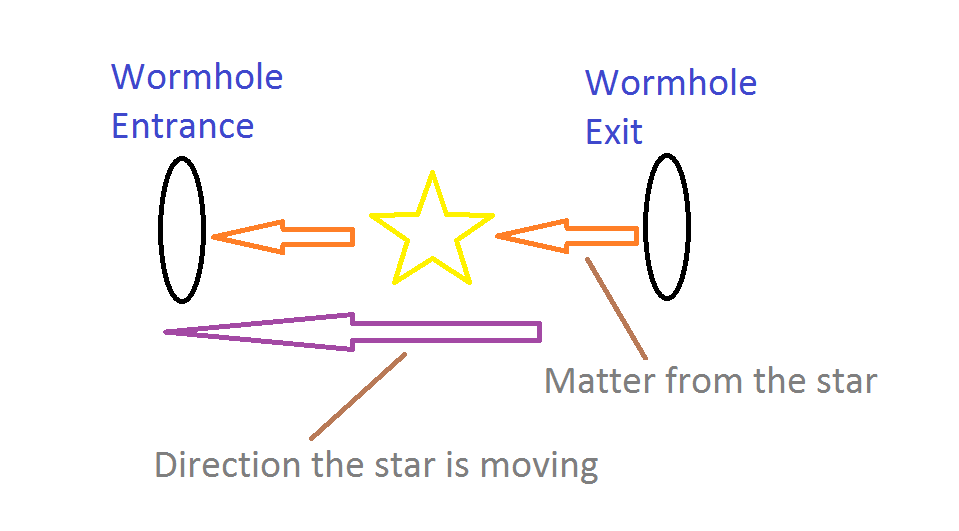 Opening and closing blackholes is already possible on a very tiny scale inside the hadron super collider. It is reasonable to surmise that at some point in the near or distant future, controlling the opening and closing of wormholes could become as trivial as downloading a file off of the internet is today.

In this illustration, the matter from the star is being pulled into the entrance. If the gravity well of the wormhole is of sufficient magnitude, the star will move very quickly without having much matter pulled in.

The largest problem in moving a star, is something I would call orbit locking, in which you may succeed in bursts to pull the star away from its current transient position, only to release it into another locked orbit or zone due to other surrounding stars and planets in the vicinity.

Using this mechanism, you could open and close the wormholes in bursts, to give the star inertia, and then you could use smaller wormholes in the reverse to slow the movement down as it moves closer to where you wish to move it — kind of like like applying brakes at a stop light, or using inverse thrusters on a rocket to land.

Hope this helps, and good luck on your intergalactic travels. Please don't move our sun, or if you do, push it a bit closer to Canada -- it's freezing here :)

Consider a binary system where gas from one is falling into the other, as is commonly the case when the larger becomes a red giant first.

Use magnetic effects to channel the plasma (if the infalling material is not sufficiently charged, take care of that first) to fall onto one pole, rather than all around the star. That will generate thrust as a jet.

Magnitar — shape the magnetic field to interact with the enclosing galactic field, or with generated magnetic fields. Or, manipulate it to cause a jet to point where you want, and kill the opposite jet.

Any star with a pair of jets, cover one to reflect the thrust. That's essentially the same idea as the shroud posted in another answer, but easier to steer.

Niven & Benford induce a jet in a red dwarf by using a shroud and aim the jet through a hole in the hemisphere.

Generate gravitational waves at different locations and focus them to constructively interfere near the star, making a gravitational gradient that the star falls towards.

Use a "warp drive" to shorten the distance in front and lengthen behind, with the whole solar system in the middle rather than the typical ship. As a plot device, you could have the "payload" required to be a huge mass, so that's the way to travel.

Pseudo-reactionless drive. Convert some stellar material into dark matter, beamed in one direction. It's a jet without the mess. Again, make the density and mass of the stellar core a necessary part of how it works, so it's not just showing off but the way to make it work.

The matrix. Hack the database to change the game board of the simulation we call the universe.

Exotic physics, teleporting momentum. Two stars can essentially repel each other without any standard force between them that anyone would notice.

Given some means to move an exotic object, or that the mechanism would make things inhospitable, you move one star and have it pass near the one you want to move carefully, towing it gravitationally, slingshotting it, perturbing its galactic orbit, or whatnot.

In theory you could create a magnetic field large enough to influence a star, also if you have the technology to use the fictional science of Cavitronics you can manipulate gravitational singularities on a whim so you could move it that way. What that is going to do to a star's internal processes I haven't a clue, I'd guess it would be bad though. Having got something the size of a star moving you have to stop it too which could potentially be much harder, precision movement with masses that big is really hard, momentum is not your friend when you have no friction to counteract inertia. The effect on the rest of any solar system associated with a star on moving the primary is going to depend on how you're moving it but in general I'd expect it to be catastrophic at best, enough gravity or magnetism to move a star is going to make nothing of a planet.

Instead of a hovering material, just put a ridiculous amount of mirrors into orbit. Then spin the mirrors precisely so it's exact rotation speed coincide with it's position in orbit. Where it would face towards the sun on one side and continues its spin so that they'd face away from the sun at the opposite side.

1
Building a Dyson sphere around the sun, what about one, or two steps farther?
1
Could we make the Solar System or the Earth a space craft using only local materials?
75
How can I move a planet?

19
How can I save a high-tech/no-spaceflight civilization against the wrath of non-technological gods?
15
What would we see of a devastating interstellar war between alien civilizations within 1000 Ly?
9
Effects of a warp field based super-speed power
4
How to retrieve cultural artifacts from a world under siege?
75
How can I move a planet?
1
What's the smallest my planet mover can be?
8
Keeping One's Figure - Myostatin Regulation
6
How To Make an Earth with 27 Suns Work, Attempt Two: Orbital Stability
1
Properties of a planet roughly four times as big as Earth
8
A world without fire - what will the military use as their main soldier level weapon?