How do creatures remain immune to changing magical effects in the environment?

Mana is a magical energy that exists in special individuals who are able to manipulate it into creating spells. These individuals are referred to as mages and are valuable assets to any nation that employs their services. This awards them a number of priviliges in society. However, their greatest strength also makes them vulnerable to some environmental factors. There exists pockets of areas called dead zones, in which large amounts of the magical energy coalesce. This raw Mana permanently settle in an area, creating various magical effects.

It is a significant problem to perform spells within or even at the edge of these areas. For those who manage to create magical effects, it becomes very difficult to control their energy. Using Mana in these areas is dangerous and potentially fatal, and spells can backfire on its user (or: fireball spell that sets the user on fire). These dead-zones are also the cause of naturally forming magical monsters. Creatures that live inside a dead zone have a high chance to produce mutated offspring who are able to innately manipulate mana and perform sorcery. Fire breathing dragon's, flying sphinxes, minotaurs, and other dangerous magical beasts or chimeras develop and oftentimes travel outside these dead zones to spread havoc among villages and cities.

As mages, the most powerful weapons of a nation, are powerless to go into these sites and kill these beasts before they become a threat, a kingdom must depend on mercenaries to venture into these areas and deal with it for a few. How is it that these magical creatures are able to manipulate Mana even after leaving their zones, while mages are not when entering them?

In this delightful video you will see a magic user trying to gain control of an overwhelming amount of magic.

OK, what you saw was a rookie firefighter trying to regain control of a firehose.

But that's the point, isn't it? Because the firefighters who have become conditioned to working the the enormous pressures of firehoses can do this: 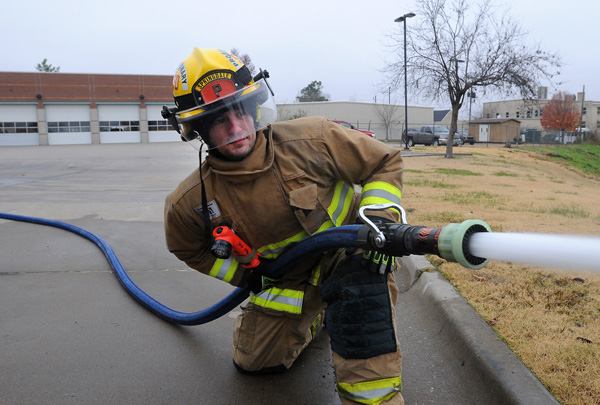 Mages are merely human. Born to magic, but not born of magic. Like the student who practices piano all their lives but have no natural talent for it, they rarely (or never) sound as amazing as the prodigy who has the natural talent and grew up using it. Magic users are simply rookies compared to your magical monsters when it comes to controlling the enormous raw force in those pockets of wonder and destruction.

And like anyone who has the natural talent and has been trained to it... when the monsters walk outside the pockets, there's simply less resource to use. 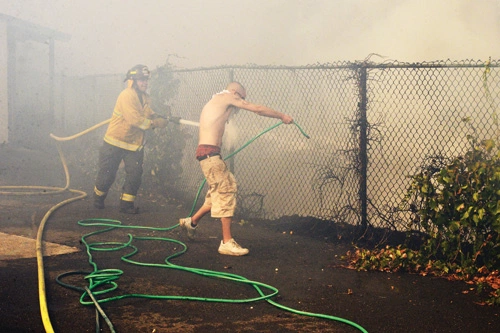 Image courtesy the Vallejo CA Times-Herald — monster on the left, magic user on the right.

Note that this does open up some interesting possibilities with your creatures. They have access to less of something they normally live with. Weaker monsters may simply die when they exit the zones. Strong monsters have weaker effects. I should think it's little different to lowering the oxygen level for a human. You can't run as fast or as far — and if you lower it enough, you die.

However I think there might be a problem with the fact that those monsters exist in the first place. Can't people just eradicate them? Also are they born of pure magic or follow more biological reasoning?

I know it might be off topic but I think if they are that dangerous then people would have killed them long ago. We destroyed whole species for a lot less and others by pure accident. Such troublesome species would be on the to extent list of all the global powers. You also mentioned they are in certain places so if you cleanse those places they are just gone. Just a thought.

There is a tabletop roleplaying game that has very minutely detailed rules for all the scenarios you've ever asked about in this site: G.U.R.P.S. It id also my favorite system.

What you call a deadzone is called a very high mana zone. They have the advantage that you can cast grandiose spells in it in ways that would be impossible or impractical in other zones. But any slight mistake in a very high mana zone is a critical error. If you cough while trying to magically lit your cigar you may set fire to yourself, as per the rulebook.

The mana contamination means anyone being born in the zone and not dying at childbirth is either extremely resistant to magic or has unnatural mastery over it, due to pure natural selection. Hence why magic natives are functional casters everywhere else.

Deadzones are Filled with Chaos Magic

Magic comes in two (or more) domains - chaos and order. In the normal world, these two live in a balance. Changes and mutations do occur, but at a rate similar to our own reality.

Humans are creatures of both order and chaos, but only use order magic because it's predictable. Not only does this mean they won't randomly blow themselves or the city up, but it allows magic to taught and built upon, creating new and more powerful spells over time. Thus a human order mage will nearly always be more powerful than a human chaos mage.

Your dead zones are unbalanced with chaos magic dominating, leading to the effects you describe, including the inability of order magic to function properly. Creatures who leave this zone would still be able to function, as chaos magic exists in the normal world as well, it just isn't used by humans.

If magic can be concentrated in a localized region, then by logical corollary it can also be depleted.

The whole concept of finite Mana as a resource that can be concentrated, depleted or hoarded is addressed very well by Larry Niven's "Warlock" world. https://en.wikipedia.org/wiki/The_Magic_Goes_Away

The OP is really asking about regions of supersaturated Mana, but the same principles (and destructive gimmicks!) should apply.

One explanation could be that the spells mages cast are too 'complex' - they require a lot of control, discipline, and detailed understanding of the environment around them to be cast properly. For example, a levitation spell cast on an object in an open field would have to account for various winds that may shift the object, and counteract them accordingly. The spells the mages cast involve effects that do not come instinctively to them as humans, and in a high-mana environment, their lack of accuracy of their spellcasting methods comes back to bite them. This becomes even more of a problem when their environment contains rogue mana, the very substance with which their spells are powered.

For the magical beasts, however, the spells they cast could be relatively 'simple' - not any less complicated, but the various mental processes mages have to make to perform their spells could be attributed to instinct for the beasts. For example, a dragon that breathe fire via spellcraft would have presumably learned to do so early on in its life, and cast that spell so many times that it comes as second nature. So even when the dragon casts its spell in a different environment, it can do so much more easily. Also, assuming the mana in these zones fluctuates (as in, it's not a solid block of mana, but more like a dense gas, and mana concentration in a certain area changes from moment to moment) magical beasts would easily adapt to casting spells in environments with any given concentration of mana, including outside their zone.

An interesting point to make against the mages would be that, generally speaking, mages who are competent at a number of 'high-magic' spells would be more valued by society at large than mages who study spells that come instinctively to humans, the way magical beasts do. A spell that can let mages read minds would be more valuable than a spell that can move an object along the ground, even though the latter comes more instinctively to a human mind. Society would selectively pressure out mages whose spells were too 'simple', thus driving the average mage towards one who chases after more difficult spells.

In summary, as Bruce Lee said, "I do not fear the man who has practiced 10,000 kicks once, I fear the man who has practiced one kick 10,000 times." Applying this concept to your question, magical beasts have complete mastery over a small number of relatively simple spells, while mages are just adequate at a large number of more complicated spells.

7
How could a channeling spell be useful during battle?
52
How could a magical, sentient library defend itself?
11
How would I use different systems of magic when they are capable of the same effects?
1
How can the offspring of powerful mages be weaker than their parents?
7
why wouldn't a beneficial mutation be passed down to descendants?
3
How can magical testicles produce DNA that is different from its host?
5
How can unbound Mana be prevented from causing damage to the environment?
10
How can a large concentration of mana lead to magical "dead zones"?
3
How can cross-contamination occur among ingredients made from magical beings?