Using pre-steam technology how can a large bore tunnel be used to drain a lake from below?

General scenario A planet similar to Earth but with only 1% of Earth’s water supports a civilization with pre-steam levels of technology that live near a river on the south side of a mountain range.

The planet’s orbit is changed by a passing brown dwarf star making it 20 degrees colder. Ice starts to accumulate at the poles and the seas start to retreat. A mountain range blocks the ability of a huge melt water lake north of the mountains from moving south to where the civilization is based (the planet is mountainous and the water is just getting locked up as snow and ice around the pole). The rain and the rivers start to fail south of the mountain range and the people decide it is necessary to access the melt water from the north of the mountains. 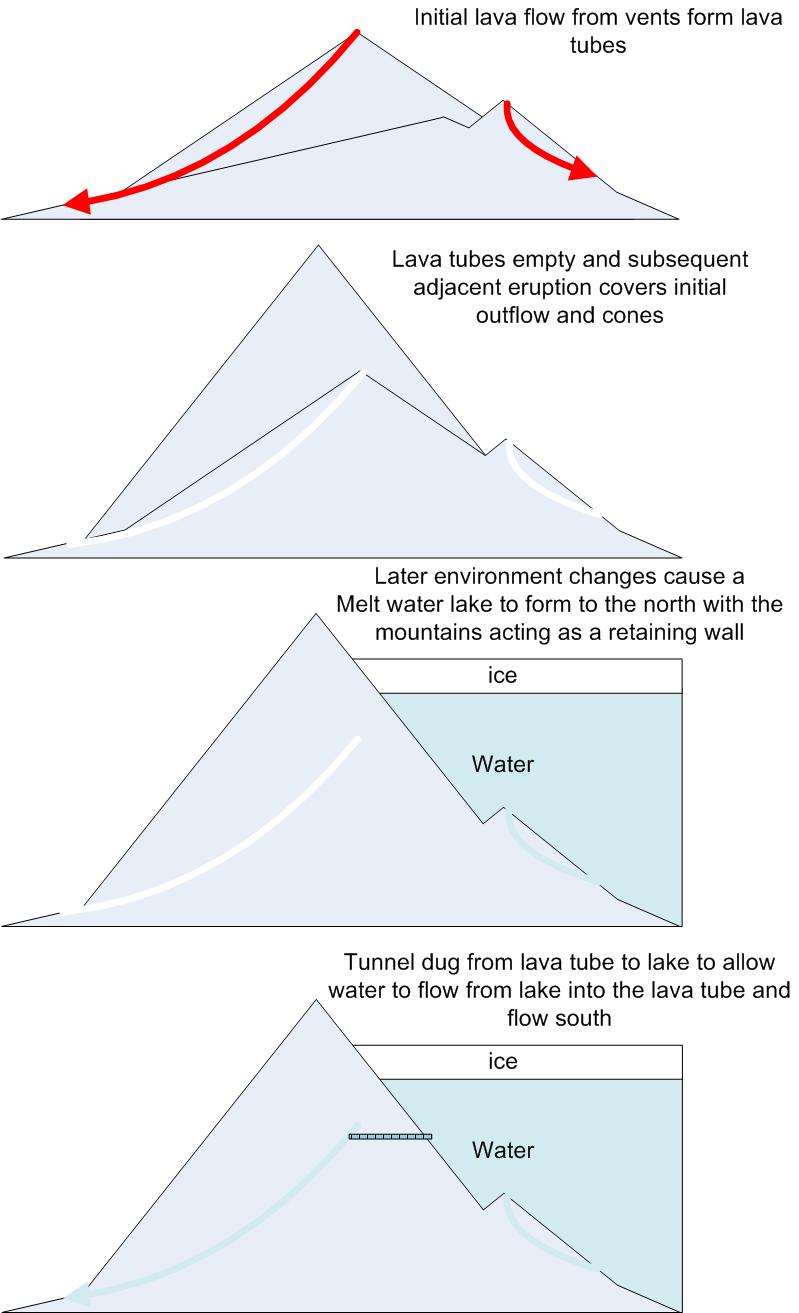 See diagram: The plan is to dig 400m from an old lava tube into the lake, but the lake is at a higher level than the lava tube (20m). Is this a practical proposition and how do they dig through to the lake water with a large enough bore hole to make a difference (>3m diameter)? They can probably dig through the rock in a few years, but the danger is break through to the lake is unpredictable. If only a small hole is created say half a square metre the high pressure water is in danger of washing everything out of the tunnel, but will not provide sufficient flow for the civilization.

How can the people dig a wide bore tunnel sufficient for a major river to the south without being washed out?

Cap the lava tube from the lake side. Then uncap it.

The lava tube connects with the lake. Presumably it is full of water. Presumably also the people can access the tube or at least know where it is down in the lake, because otherwise how could they make this plan?

Build a impediment to flow across the lava tube. I picture something like a big wooden door with tarred rope on the inward (tube) side to improve the seal. Once built, take it up onto the mountain, weight it with rocks and hang it down from moorings on the mountain above so it is in front of the lava tube. It is not going to rot any time soon. That water is cold.

Now when your diggers get to the deep side of the tube, they will get a rush of water as the tube empties out. Then a trickle, as the water pressure from the lake pushes the door against the tube. Pressure will hold that door there tightly. Your miners can finish the tube as they see fit.

If they plan ahead, they might build things into the door like an adjustable hatch. such that they can open it while leaving it in place. It might be handy to regulate flow. They might want to close it again if they need to make repairs.

I see four ways it can be done:

Caisson down from the ice. (Needs metallurgy)

Dig in the lava tube towards the lake most of the way, stopping short.

Caissons are a pain without steam pumps (you may need a horse drawn pump or teams of people pumping), but they are possible.

(Edit: you said no gunpowder in a later edit. So ignore this. I'm just leaving it up for future reference) 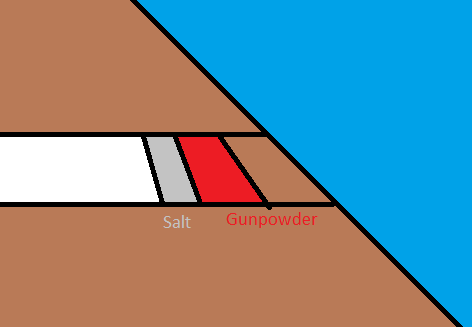 Tunnel towards the lake as much as you dare, stopping a few meters short. Take care to get the base on the tunnel as smooth as possible, perhaps even put a layer of concrete down.

Pack the last several meters of the tunnel with gunpowder, run a fuse, and then pack the tunnel with about a meter of salt until airtight, with solid blocks of salt in the middle, loose salt on the sides. Then put some planks of wood behind it, secured to the walls, and then plaster over it with a simple lime cement render for extra reinforcement and airtightnesss.

Light fuse. Gunpowder explodes. The salt and wood structure stops the blast from disapaiting into the tunnel, and instead fractures the rock. Water (and rocks) flow into the chamber where the gunpowder was.

The water hits the salt and dissolves it, quickly working it's way through your salt. As the salt collapses the planks and lime reinforcement gives way too, eventually you have salt water flowing down.

After a few hours the water flowing out will have cleared out the salt, planks, and most of the smaller rocks. The smooth bottom allows these to flow with the water. 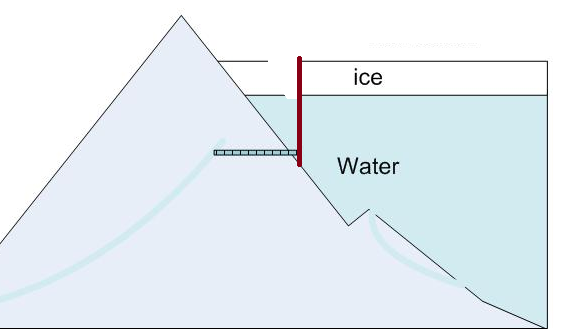 Build a 25m high metal door. Lower it down to ground level below the opening. Then dig from both sides.

When finalised. Lift the door.

If you put guide rails in, you can use it as a dam to control the flow later.

Build rails and a rack line from ground level along the lava tube, and into the new tube. Build a metal drill bit the size of the tube, mount it on rails and to the rack, attach it to some gears, and have teams of people / horses pull to make the drill bit rotate, and the bit advance.

Because the drill bit is the size of the tunnel, it plugs the hole nicely, especially if you make it a long cylinder behind the conical part.. When water starts to seep in, keep going for the length of the cone to guarantee you've got the hole the full width, but you still have the cylinder part for safety.

Once you've reach that part, start turning the gears the other way, making the tbm retreat back down the tunnel into the lava tube, and back to the mountain entrance. Water will be seeping past you, but it should be a half decent seal and the tbm should stay on the track and rack.

At the mountain entrance, when the track and river diverge, the tbm follows the track, and the full river flows out.

As hinted at by @Ash in the comments, gunpowder was available much earlier than steam power in our civilization. According to wikipedia it was discovered in 9th century China. That solves the problem of the amount of material to be bored through and, with a long enough fuse also the issue of not getting your workers washed out. Even with steam power, getting workers washed out seems like a tough problem to solve.

Even with explosives though, tere is still the tough problem of knowing how close to the water you are. Trial and error may be risky, and sonar is way beyond steam tech.

The miners push a tunnel up from the top of the lava tube to the surface for ventilation and ease of surveying. They break numerous holes in the ice and survey the depth of water at different distances from the shore. As the tunnel is in a straight line from the top of the lava tube and only 400m long, they will be able to calculate the breakthrough point fairly accurately probably to within a foot or two.

The horizontal tunnel is extended to within a few metres of the water. They can get some idea of the exact distance remaining by drilling small bore holes (one inch diameter) forward from the rockface ahead of the main tunnel. These could be backed by large braced wooden structures so that the water pressure at break through would be prevented from blowing the drill out of the hole. At break through the water would have to force its way around the gap between the drill and the rock, this would still involve plenty of water but should be noticeable but manageable.

The miners then slowly and carefully extend the tunnel as far as they dare, perhaps within 1m of the water.

Finally the miners and their equipment exit the tunnel and a large hole is drilled in the ice directly above the break through point. A very large steel spike caped ram formed by the end of a 25m long ships mast is lowered vertically down until the spike is resting on the breakthrough point. This mast is then repeatedly hammered from above by raising and then dropping a very large rock into the top of it until the rock below ruptures.

They might also need a large barge in place or other support well out onto the ice. After the breakthrough if the water flow is insufficient the hammering can be repeated a few feet in different directions to extend the hole.

Not the answer you're looking for? Browse other questions tagged science-based science-fiction underwater mining .

5
Can spiders be used like spy drones using brain implants using current technology?
11
How high can a city be built on a mound in a flood plain?
3
Could canals solve H G Wells Martians water shortage problems?
4
How to build a massive canal system with the aid of limited magic that does not substantially affect anything else?
3
Can my preindustrial civilization control an artificial water flow on the scale of the Mississippi?
3
Climates of a Eurasia-like continent in the tropics
13
What is a plausible way to maximize the amount of NATIVE silver deposits in a given area?
2
Is this Subterranean Isolationist City Self-Sufficient