How to Give An Ordinary Man Vampire Strength

One of the most overlooked traits of vampire biology is superhuman strength. In fact, Dracula himself was described as having the strength of twenty men. Now, this description posed a physical problem because this is how the Count originally looked: 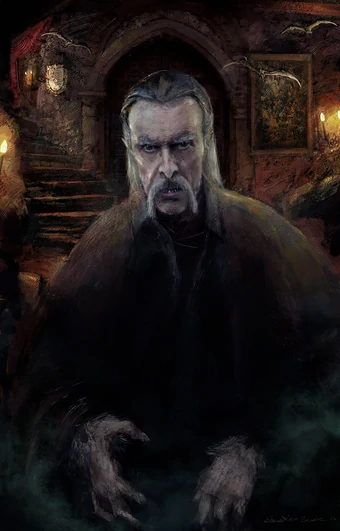 And this is how a man might really look if he were twenty times stronger: 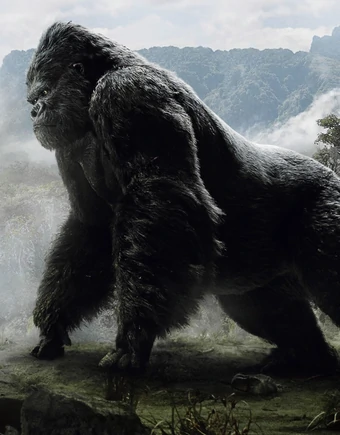 Lately, I've been exploring a brainstorm in which vampiric superstrength can be possible without resorting to making the subject as big or dense as Kong. Using genetic engineering, how can this be achieved?

For further clarification, he could easily be mistaken for an ordinary human being unless he demonstrated his strength...or his long, baboon-like canines.

Human muscular strength stems from two factors: a mechanical one (the myosine-actine fibers that contract) and an electrochemical one (the innervation that controls said fibers). If I recall correctly, humans allocate motoneurons and motor axons in a different way from chimpanzees or gorillas, trading finer motor control for brute power. A chimp is two to five times stronger than a human per unit weight, but doesn't have the same level of fine motor control.

(Humans are believed to possess a chemical bypass into this less-coordinated, more powerful muscle operation mode. In Irish lore it is called ríastrad, warping-spasm or battle-fury; in modern times, as @DWKraus noted, there are documented cases of the so-called "hysterical strength").

Extra nervous fibers could then be gengineered to restore the maximum theoretical mechanical strength with no need of adding significant mass. So we'd get a man two to five times stronger with no outside change.

To exceed this, our "human" needs a different "engine". There are myosin analogues that have more strength than conventional myosin; it is not impossible for an even "stronger" molecule to exist. Two or three times the elementary strength, slightly more muscle mass, and twenty times overall is doable. This part is known to happen in humans due to several different mutations (with normal innervation it only brings two or three times normal strength, and even then, only if the mutations are exactly right, or you get drawbacks of all kinds: there is a reason if this mutation never became dominant, even if there are reports of "weird-touched" warriors capable of fearsome feats of strength).

The issues you're going to have are then oxygen and energy expenditure (up to twenty times as much during efforts, and I expect at least twice the norm when at rest), and bone structural resistance.

A tetanic contraction (chimpanzee-level strength) can break a bone in a normal man; our vampire analogue runs a risk four times higher. Bones can be reengineered quite easily making them out of slightly different materials, but that almost certainly means they won't be able to support marrow, and therefore blood cells can no longer be manufactured. Our vampire analogue will require blood from an external source, or a dedicated organ (a modified spleen, probably).

Then we probably have to expand a bit the thoracic cavity, to accommodate a larger, stronger heart - 100 mL of blood per heartbeat aren't going to cut it, we need at least ten times that, so a larger, fast-beating heart. This German toddler has two copies of a mutated gene for myostatin-induced strength... and a heightened heart risk factor. He might be able to strain himself into a heart attack.

Then, you also need thicker blood vessels, and/or higher haematocrite, and/or a different (way smaller) haemoglobin analogue - this last prevents the possibility of supplementing blood from an outside source though; and the haemoglobin analogue might not be the usual blood red. If it was colourless, we'd get a much stronger person, with a terribly pale skin. Make the analogue photosensitive (e.g. it will polymerize or coagulate or even dissociate exothermically when hit by UV) and the poor creature will be doomed to darkness, since sunlight is liable to make them literally burst into flames.

do we need "twenty" men?

For a large part of human history, "strong as X men" more or less equated "able to defeat/survive X opponents in a melee".

But "X opponents" cannot optimally bring to bear their strength e.g. in battle for geometric reasons, because no more than, say, four or five can really grapple with their opponent at the same time.

Also, one's full force isn't always fully directed against the adversary - advertence, speed and technique all count (in several martial arts, for example, you use your opponent's strength against themselves).

So, a single person "just" three times as strong (with suitable bones), faster, nimbler and with the required endurance - all things that can be supplied with improved neuromotor system plus, as said above, bones and energy reserves - could really beat twenty or even more men, and so be classified "stronger than twenty men".

(Merlin Athrawes, an artificial construct in David Weber's Safehold series, is about ten times stronger and faster than an ordinary person, as well as having practically infinitely more endurance on account of being nuclear powered; in several occasions he and their(*) battle steel katana prove able to overcome a number of assailants in the order of one hundred).

Merlin was templated after a woman, Nimue Alban. While the Merlin character is male, he later teams up with a female avatar of himself, Nimue Chweriau, which makes for a quite complicated use of pronouns.

Not the answer you're looking for? Browse other questions tagged science-based biology humans genetic-engineering vampires or ask your own question.

20
How much blood does a vampire need?
7
Evolution of Vampire Zombie
7
How much blood and/or platelets can a human give to their vampire overlord each day and still be healthy?
3
How do male vampire loses iron?
3
How Would a Human Male Survive Interspecies Pregnancy and Birth?
8
How could lower gravity give someone “the strength of ten men”?