How would I coordinate meetings with people on Mars?

First off, assume faster-than-light communication exists and has enough bandwidth to do video conferencing. This question wouldn't even be relevant without faster-than-light communication since it takes 3-22 minutes for a message to transmit at the speed of light between Earth and Mars and you can't have a coherent meeting with that kind of latency.

The problem here is that the Martian Sol is 37 minutes longer than it is on Earth. While they could simply go by Earth time*, and probably would keep an Earth clock if they needed to coordinate with Earthlings, many of the people prefer local time since it better matches natural sleep cycles and have adopted local time because the majority of people there don't interact much with Earth. As a result, Martian time essentially behaves like a timezone which shifts in and out of sync with Earth time.

This makes coordinating meetings across planets troublesome, to say the least. A meeting held during reasonable business hours on a weekday one week (assuming both operate on 7-day weeks) might be during breakfast for the Martians next week. After roughly 4 weeks on Earth, Mars is a whole day behind Earth, so Earth is trying to hold a Monday meeting while Mars is enjoying a lazy Sunday.

How do I, the CEO of Megacorp Industries, hold meetings with my Martian executives?

*Obviously, the problem is pretty much irrelevant if people go by Earth time, which would be reasonable to expect if they lived in controlled environments. The "Just use Earth time" also isn't necessarily going to make sense if this concept were to be generalized to some distant planet that is naturally habitable.

The same way we do now.

I work for a multinational company, with colleagues distributed across a dozen time zones. When I need to schedule a meeting with many people, I simply open Outlook, and look at their calendar to find a free time that is within normal working hours for everyone. I don't need to do any mental calculation of what time it is where, the program already shows me free/busy/nonworking hours for everyone, and I can even have it pick the next available time automatically. This will really be no different - you may need to wait several days or weeks for the Earth/Mars day cycles to line up, but you can simply have the scheduling program find a time that works for everyone.

Recurring meetings will be a bit trickier, as a recurrence cycle that kept the meeting at the same time/day in both places would be prohibitively long (nearly 9 months), but there's no reason a scheduling program couldn't handle that as well - simply pick the next amenable time that's close to your target recurring cycle. Recurring cycles of 39 days may be convenient in some cases, since that will offset the Mars schedule by one day each cycle, while keeping the meeting at nearly the same local time on both Earth and Mars.

Don't. At least, not more than you strictly have to.

For day to day operations, your input should not be necessary. If it is, fire the person at the head of the Martian org chart and get someone more reliable. If you're a large enough company to consider opening a satellite office on another planet you're large enough to find someone competent to put in charge of it.

Of course, you can and should demand accountability from your Martian subsidiary, in the form of automatically-generated data points leavened with written or recorded reports. Only if those reports are wildly out of line with your expectations would you need to get on the space-phone with your trusted Martian lieutenants, and being woken up by an angry phone call from your boss is simply an occupational hazard of being an (underperforming) executive.

The key is to run your Earth and Mars offices less as branches of the same company, that might have any number of reasons to talk all the time, and more like what they are: two subsidiaries of the same conglomerate, whose operations are physically separated (by a vast margin) and don't need such careful coordination.

The same way meetings are scheduled now: whenever the boss wants to have it. Doesn't matter if you're a night owl and work until after midnight, if the boss isn't, s/he will still schedule breakfast meetings. (Don't ask me how I know this, as I will be unable to resist the temptation to use impolite language.)

Things can get even worse when you're running on Pacific time, and most of the team is based in Europe.

The problem here is that the Martian Sol is 37 minutes longer than it is on Earth.

It's extremely commonplace in sci-fi stories/worlds that, humans just ignore the local "rotation time of the body they are living on" and adopt usual Earth time.**

I would point out to you that IF you have the Martian dwellers for some reason decide to suffer through a different length-day ... that would be so strange you'd have to explain why that is the case.

(A completely random idea for example - they are highly agricultural "in tune with nature" types so, no matter how hard on their bodies, they use a weird local time.)

BTW, Google have this completely sorted out in their pre-search linguistics. Just ask ... 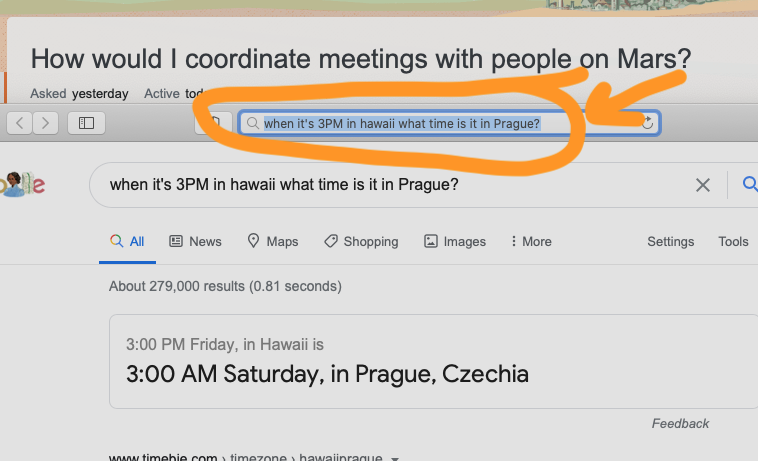 *(Often some specific city - actually for example in Star Trek doesn't everyone run on SF time?)

If FTL communication exists, then backwards-in-time communication can be achieved. Dedicate your effort to that. When you're finished, ask the Martians when the meeting would have been convenient, and schedule it for then.

Not the answer you're looking for? Browse other questions tagged space space-colonization time .

1
How to calculate the time on planet B for an event that happened on planet A?

10
Would a replicator plague be sufficient to destroy an advanced (interplanetary) civilization and leave very little evidence?
3
Which of these space colonizing civilizations has the advantage in a conflict
4
How would we terraform Mars?
36
Economic reasons to put people on Mars?
14
A reasonable scenario/mass motivation to colonize Mars for the first million of people with enterpreneural spirit
5
Self-sustaining Mars colonization
23
Martians want to keep their weeks roughly in sync with Earth. How would they do that?
3
How would colonists on Mars effectively move about with the lower gravity?