Would a giant atlatl be a viable siege engine?

I want to explore an advanced Native American civilisation; assume their general 'technology level' is 'equivalent' to 13th-century Europe. Biggest difference is that their metallurgy is lagging behind; this country is only just starting to make use of iron for instruments larger than tuning forks, and they haven't invented any kind of steel yet. Other than that they're as advanced as you would expect: they have universities, an expansive bureaucracy, a long literary tradition, and lots and lots of warfare.

The important thing is that they got their civilisation to such heights without any contact with the Old World whatsoever. Because of this lack of cross-pollination up until the time of their discovery of the Old World, I have vested interest in making this culture 'strange' from the European perspective, including their solutions to known problems. Convergent evolution is a thing, but I do not want to rely on that to such an extent that any American tech I describe sounds like an Old World thing with a paint job.

So I want an original siege engine. Assume that, for much the same reasons as Old World states did, this civilisation too began to use stone fortifications and eventually fortresses. To deal with those, Old World engineers have developed many, many ways to sling projectiles either against those walls at great speed, or over the walls and onto the weaker buildings inside. That's what catapults, trebuchets and ballistae are. My idea is a giant atlatl or spear-thrower; to be realised as effectively a combination of a catapult and a ballista.

Imagine this mechanism, but instead of a human arm you have the arm of a catapult. 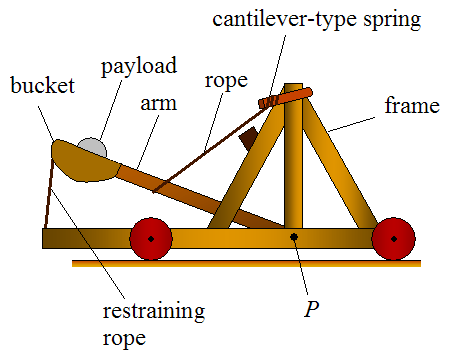 The question: could this be a good alternative siege engine? I am considering two things:

If necessary, maybe the inefficient metallurgy could play a role in keeping the giant atlatl a viable machine, effectively preventing it from turning into a catapult? As said my interest is in keeping this civilisation weird.

Not in the way you are thinking.

People already have made "upscaled atlatls"; they're called catapults and trebuchets. They just didn't load them with javelins, for several reasons.

EDIT: To clarify my third point, a javelin of the same weight as a rock is going to do more or less the same amount of damage, but it takes a much bigger catapult to fire the javelin than it does the rock.

It Would be Very Hard

Atlatl's store energy in the javelin itself. The heavy stone/iron point resists motion more than the wooden shaft, since objects at rest tend to stay at rest.

This results in compression of the javelin shaft like a spring. When the Atlatl leaves the launcher, it un-compresses rapidly, pushing forward.

You can see this in the bowing of the javelin if you watch a slow motion video of an atlatl.

Atlatl actually tend to be made of soft wood, because hardwood doesn't flex enough.

To make a very large scale atlatl would be... interesting - you'd basically strip a pine tree, attack a big rock at the front, and then push it really hard from the back.

Maybe an H Frame could Work

Basically, we're building a giant slingshot, but we use a dart instead of a pebble, and counterweights instead of rubber bands.

Build a large scaffold shaped like a capital H. The atlatl sits with the back end on the ground, and the heavy end on the horizontal centerbar. Pulleys at centerbar height ensure that when the counterweights drop, the force on the javelin is applied at the rear, with the line of motion through the point.

We need the motion to be in line with the javelin in order to create the bending, which stores the energy from the counterweights for an explosive release.

The atlatl isn't cheap! The length, springiness, weight, etc are all important to getting the bowing right, and after you've invested all the time and energy in finding / cutting / tuning your javelin, you only get to use it once. This is the basic reason why bows are better for warfare than atlatls.

The pulleys - It's a non-trivial engineering challenge to transfer the force from the falling counterweights to the log / tree / atlatl.

The main issue I see is that, while making a spear is not that resource intensive, making an upscaled spear to fit an upscaled atlatl would require much more resources, on top of those needed to build the atlatl.

Consider that carrying along all the ammunition is a burden on logistic: while a catapult can be loaded with materials found on the spot (stones, boulders, bricks), saving effort in transporting them, making a large set of upscaled spears require having decent trees around with straight and well balanced trunks, and not just any tree. That would imply taking along the ammunition.

From a pragmatic approach I think a catapult would still be preferred.

Not the answer you're looking for? Browse other questions tagged science-based weapons engineering siege or ask your own question.

5
How to build a fortress on a floating island?
6
Timekeeping Systems on a Habitable Moon
37
Suitable real world critters for a causing mayhem (disabling comm and defense systems) via catapult?
0
Siege technology for massive migratory fleets in a fantasy world
17
How do we defend the great canyon city of Hurr from siege?
18
Could a giant excavator (like Bagger 293) breach an armored wall in a siege?
4
Could a human grow up larger by manipulating their endocrine system?
27
Defending Castle from Zombies
8
Repulsive magical engine