What type of shelters would need / create this arboreal civilization, if any?

Currently building the civilisations of my world, I found myself stuck on a particular aspect of the arboreal civilization, and would be very grateful for any tip (Tall trees : selective pressure).

To recap, this arboreal civilization has been completely isolated from other ones since they settled in a forest with giant trees (see the link above).

So here is my question :

What type of shelters would need / create this arboreal civilization, if any ?

They live in hights, because the grounds are too dangerous

This indicates that all is not quite as peaceful as the rest of your comment seemed to indicate. I'm presuming there are some pretty nasty predators at ground-level if the entirety of human civilization in the area doesn't even attempt to touch the forest floor. Also war might be rare as we know it, but tribal raiding in hunter-gather societies almost certainly took a higher death toll (percentage wise) than modern industrial warfare, and it didn't stop just because food and shelter was plentiful. (For details I suggest the excellent "War Before Civilization" by Lawrence Keeley.

So you have two threats that cannot be overcome with your current setup of large branches to shelter from rain and storm. SOME form of man-made shelter would be necessary. Because I'm a nerd we'll refer to this structure as a "Flet". Probably your people would set up around some of these arboreal wells you mentioned, as a reliable water source is always handy. Next, they would "fortify" the flet. I'm going to make an assumption that your forest, like all forests, have vines that climb trees and potentially exploit them for nutrients. Poison Ivy is one such vine common in north america, and can climb trees. A similar vine which causes nasty rashes or blisters, or one with thorns, would be an excellent deterrent. Maybe a couple different varieties trained/pruned to grow under/on the lower outside edges of a Flet (or the underside of the branch a flet is on, depending on branch size). This would deter whatever large predators from the ground level might decide to climb a tree to get after the tasty humans, as well as other human raiders thinking of attack from below.

If there are no significant airborne predators the next step would be to remove branches (or even entire neighboring trees) which would provide cover/concealment for an enemy or predator trying to sneak up to your flets. The flet village (depending on the size of your tribes/size of your trees) could either be multiple flets on a single tree or several trees. This clearing would do double duty, since it would not only remove hiding places where something could sneak up on you, but it would also likely encourage the growth and wellbeing of the tree/s your flets are in! If you want added safety you could use the spiked vines or tree branches to weave the walls of their flets, or (if the foliage is dense enough) as a sort of floating wall around the village.

It seems like your branches are wide enough to provide rain cover. If you can fell the local trees/vegetation surrounding your flet you're not in much danger of attack from above, as humans/predators couldn't climb/jump over very well. If so, then you wouldn't need to do anything to the upper branches at all! If you can't cut down the neighboring trees, or if your weather doesn't often come with hurricane-force winds, then your flets would be built as high as possible to make it as difficult as possible for things to come in from above. If the tribal warfare is particularly fierce (or was in the past) they might build flets even higher than the large sheltering tree limbs at what I assume are mid-tree height. At that point they'd probably construct what amounts to treehouses using the thinner branches of the tree as key supports.

Another thing to note is they would, if at all possible, NOT cut into the tree their flet is in without REAL good cause. Any cut through the bark runs the risk of infecting the tree, so even if the trees have useful/edible sap they'd likely only drill into trees their not living in. Sure a big tree with a little hole isn't THAT likely to cause a rot that kills the tree, but it only takes a couple times in the millennia your people have lived in this forest for "don't cut your own tree" to become a piece of folklore passed down through generations.

It sounds similar like the Korowai people. I don't know if this would fit regarding your tree height and size though, but maybe it can help for inspiration.

Here is some copy paste from the link:

Deep within the inaccessible jungle of the southeast Indonesian province of Papua, about 150 kilometres inland from the Arafura Sea, lives the Korowai tribe – a clan totally isolated from the rest of the world. They are hunter-gatherers living in a small society of traditional family ties who need to share all they have in order to survive. Until their discovery by a Dutch missionary in 1974, the Korowai had hardly any contact with the outside world.

The Korowai people live in tree houses ranging in height from 6 to 12 meters, but some are as high as 35 meters above the ground. Usually the houses are built on a single tree but frequently the base of the house consists of several living trees, and additional support is derived from wooden poles. These tree houses protect families not only against swarms of mosquitoes below, but also ward off annoying neighbours and evil spirits. 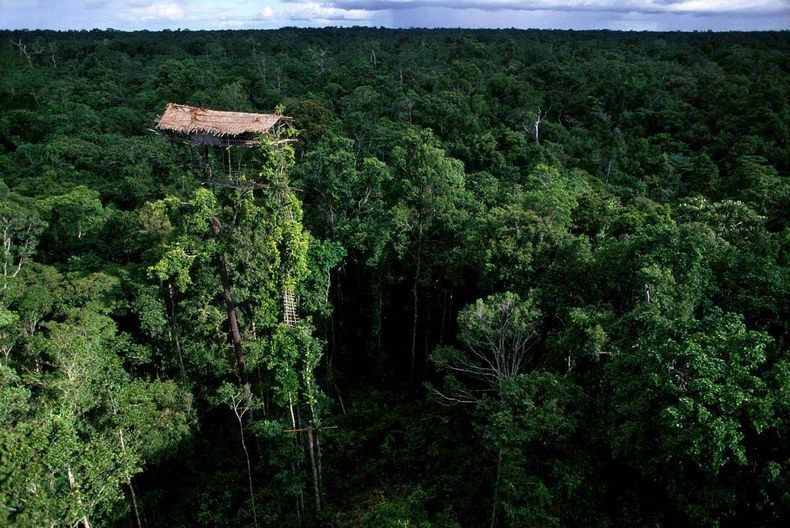 To build a tree house, a sturdy Banyan tree is selected to function as the central pole. The top of the tree is then removed. The floor frame, made of branches, is constructed first and then covered with sago palm. The walls and roof is made with the same leaves the frame of the house consists of branches fastened with rattan bindings. The flooring must be quite strong as the tree houses often accommodate as many as a dozen people. A dry tree trunk with notches is hung from the bottom of the tree house in order to get up to the house. This ladder shakes with each step and warns the inhabitants that a visitor is on his way up.

I know the BBC video could be revealed to be fake or something, which is more like it's the exaggeration version of the village, the original even having a simple hanging bridge plank to connect each house and it's still quite high.

Base it on native stilt structures.

building on stilts is common in places where flooding is common, so the problem is similar buildings that must be elevated. 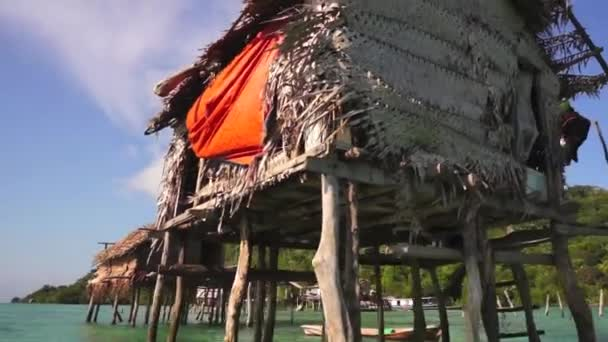 Note how the walls and roof are essentially made of woven leaves or bark, everything else is just wooden poles. Such houses are basically made of nothing but tree products. Keep in mind hunter-gatherers are not going to be spending a lot of time in their houses, they are basically places to sleep and store things.

Your biggest problem is they don't have a tools to really work the wood. The lack of resources is going to make everything very hard. An axe or knife is near impossible without access to the ground. Functional axes have been made from large clam shells but they won't have those either.

Not the answer you're looking for? Browse other questions tagged humans technological-development civilization .

4
Tall trees : selective pressure
2
Can this natural park support the growth of 200 to 300 meters tall trees?

5
What level of technology would our solar system neighbors need to detect Earthlings?
3
What would be the major differences on our planet and civilization if humans were exclusive insectivores?
2
Earth evacuated - what advancements would an early civilization gain from what they left behind?
2
How would a Type I civilization not cook itself?
3
What is an expedience of sci-fi gliders? these machines flying near the very ground
2
What types of conditions in an early civilization would create a religion that values joy, celebration, camaraderie and loyalty?
9
When many animal and plant materials are comparable to modern materials, why would any civilization develop metal working?