Huge lasers firing into orbit and eye damage; how to prevent mass blindness?

There are a few uses for ground-to-space lasers in science fiction settings. One is the laser broom, used to shoot space debris until it deorbits and burns up. Another is beam propulsion, or sending energy to a launching spacecraft via laser. These technologies pose a pretty serious question; how do you prevent millions of people from going blind when they inadvertently look up at the sky?

As I understand it, lasers can cause eye damage even if you aren't in the path of the beam due to scattered radiation and diffuse reflections. An obvious solution would be to provide laser safety glasses; in a small-scale, single-room laboratory, this works fine. However, I can't wrap my head around how you could possibly distribute enough glasses to reach every single person on this half of the Earth, and communicate to them when and where the laser will fire no matter their language or literacy level.

This kind of logistics would require knowing the location of every single human being within a horizon's length, including isolated rural families, remote indigenous tribes, homeless folks, etc etc, and being able to send them protective equipment, time and date without timezone errors, direction, and an order to lock themselves indoors without windows. Plus, there are animals, who you can't just put safety glasses on. I've considered the unethical approach of having the government/corporation/military just ignore the people and animals they aren't able to reach, but I think this would be financial and political suicide in the age of social media.

My question is this: how can you safely fire a laser at an orbital (or beyond) target without blinding millions of people?

Although laser light is collimated, the bloom it creates in atmosphere will not be. Any reflected light is reflected in all directions more or less equally. (Unless you have something in the air capable of specular reflection, and it's all aligned in the same direction - in which case, stop shooting your laser at the giant floating mirror!) Most of the light that doesn't reach the target is absorbed rather than reflected, and this is re-radiated in all directions as black-body radiation.

The effect of non-collimated light falls off with the square of the distance from the origin. Even if the laser light is dangerous at a distance of a few meters, it won't be dangerous over kilometers. If it were, you wouldn't be worrying about blinding people, you'd be worrying about destroying your laser by superheating the air in front of it into plasma.

It's probably prudent to avoid getting too close to the beam, but you shouldn't let people get too close to your space infrastructure for any number of other reasons. Rocket launch sites and testing ranges are usually built in fairly out-of-the-way locations for this very reason, and laser installations would follow suit.

Inevitably, some animals (mainly birds) will wander too close to the beam and be harmed by the light and/or heat, but it should not be terribly out of line with other infrastructure. Environmental impacts are rarely "none", but in all likelihood it wouldn't be worth raising a fuss about.

tl;dr: as long as you practice safety measures appropriate to an industrial site, you'll be fine.

When you read that laser beams are very well collimated, it doesn't mean they do not diverge at all. It just take them long distances to show some appreciable divergence, but they DO diverge.

For example, in the Lunar Laser Ranging experiment, the laser beam which is shot from Earth is no longer a point when it reaches the Moon surface

Just to give you a measure, every $10^{17}$ photons fired, only 1 is collected back on Earth (after the roundtrip).

As you see, distance is your friend, spreading the laser beam over a large area.

If you pick a frequency where the atmosphere is opaque, you have further attenuation.

No need for goggles.

The inverse square law is out friend here.

One of the things that makes laser's a danger to the eye, while other sources of light (lightbulbs) are not is that laser light is aligned into a beam. This means that even a modestly powerful laser can generate a much brighter point of light than a powerful light bulb where the energy is far more spread out.

Now, when laser light scatters from these orbital debris and asteroids the light scattered will come out at all kinds of angles, and so it will spread out in all (or at least many) directions.

Near Earth orbit is 20,000 km above the ground. Lets say a laser is hitting some debris or the back-plate of a spacecraft using laser-assisted launch at that height. Lets further assume (for simplicity) that the laser light is scattered evenly in all angular directions. So at the 20,000km mark the energy is evenly spread over a sphere with surface area of $5\times 10^{15}$ meters (a 5 followed by 15 zeros).

On Earth sunlight has an intensity of about 1 kilowatt per square meter. To be as bright as the sun (as seen from the Earth's surface) the power you need to be comming off this piece of space debris is about $5\times 10^{18}$ Watts. This is 5 exajoules per second.

Lets put that in perspective, according to wikipedia (https://en.wikipedia.org/wiki/World_energy_consumption#/media/File:Japan_energy_and_GDP.svg) the energy usage of Japan (I think only on the power grid) was about 20 exajoules in the entirety of 2010.

This hypothetical laser is dissipating a Japan's worth of energy into wasted scatter light every 4 seconds.

Now their are lots of assumptions here, factors of 10 or even 100 or possibly 1,000 could be altered by adjusting them. The biggest weakness is the assumption of even spread, the asteroid you are melting might have one big flat metallic facet that acts like a mirror. But the point remains, no plausible laser system operating in space has any chance of getting anywhere near outshining the sun due to laser scattering. I assume that causing widespread blindness would require reaching intensities in this kind of ballpark.

Their are still dangers. If some computer error (or terrorist attack, cyber-attack, other problem) caused a laser to turn it beam to directly face the Earth then the danger is potentially much higher.

A final point. If one found that the dangers were much greater than indicated by my estimates, and blindness was in fact a danger. Then a possible solution is to choose lasers that operate at a wavelength that is absorbed strongly by the atmosphere. This would have drawbacks (all the laser stations would have to be in space), but it would ensure that Earth was safe.

I agree with the observation about the benefits of the inverse square law to mitigating this problem. I add also that the wavelength of the laser's operating mode is also an important factor 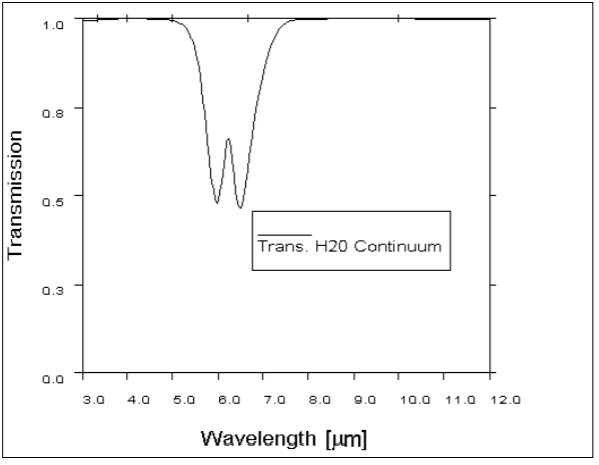 Wavelengths greater than 1.5 $\mu$m are absorbed by water -- this makes them eye-safe since the water in the eyeball absorbs the radiation before it can damaged the rods and cones of the retina.

If your planet based lasers operated in the pass bands at ~5.5 $\mu$m and ~6.5$\mu$m, were the attenuation is minimized, the energy would pass through the lower atmosphere with minimal losses and the inverse square law would refracted light would be too attenuated, both by atmosphere and viscous goo in the eye, to injure a passers-by vision.

That said the laser systems would want to operate either atop mountains -- to lower atmosphere density and absorption -- or in arid places with low atmospheric water content. These two conditions will maximize the power transfer to the target.

There would also be some concern with dust since it could absorb energy and flare in different wavelengths which could be in UV range. Think thermalized electrons or fluorescing mechanisms -- there are many processes available to cause matter to generate photons in response to energy.

This master's thesis discusses transmission and absorption of IR in the atmosphere, if you want more info.

how do you prevent millions of people from going blind when they inadvertently look up at the sky?

This is going to be really obvious, but...

If the laser is on the ground and pointing at the sky, that means the light is going into the sky. In order to get blinded by a laser, the laser light has to go into your eyeball. That means you have to be in the sky, not just looking at the sky.

Unless the laser accidentally reflects off a plane.

So don't point it at planes, or the ISS.

Not the answer you're looking for? Browse other questions tagged science-based biology science-fiction physics logistics .

16
How much power can you send via a laser through the atmosphere without catastrophic effects?

15
Handheld weapons, plasma vs. laser
13
How to create 'visible' space-laser-like weapons
2
How could one literally scorch a landmass?
5
What would be easy or difficult to do with the power to directly control light?
6
Stellaser Part I: Trial by stellar Fire or The best design out of three for a solar powered 5 Petawatt laser?
7
Effectiveness of lasers of different wavelengths in space combat
7
Space Combat Depiction 1: Laser Pew-Pew
9
Does the beam quality factor M2 really ruin long range laser warfare in space?
6
Are laser-stars the better missile carriers in space warfare?
0
Bathroom Mirror vs Eye Lasers