A solar system where a planet is in the center?

Is a solar system where the center is a planet possible? Where would the heat on it and its moons come from? Would life of any kind even be possible? Would everything be pitch-black, or would some light come from stars?

Rogue planets are naturally dark and cold, since they do not receive significant insolation from any star. Starlight, though weak, is still light however, so the planet would not be entirely pitch black. Any heat would have to come from geothermal or radioactive activity within the planet itself, as there is no significant external source of energy like the Sun. Rogue planets that don't have their own internal sources of energy will be dead. I wouldn't say it's impossible for life to exist on a rogue planet, but I'd expect the odds to be much lower simply due to far lower abundance of available energy.

These are very close in mass, they'll orbit around a point 2/3rd the distance from the sun to the planet.

But can we get a planet with a star orbiting around it?

Yes There are some precise configurations that have a massive planet in the centre and a big sun orbiting around it.

The simplest would be 3 massive planets, and a tiny sun. The tiny sun is twice the weight of each planet, and all 3 planets are the same weight. The tiny sun and 2 of the big planets share an orbit, with the two planets close together. The forces should cancel out, leaving the big planet in the barycentre of the system. 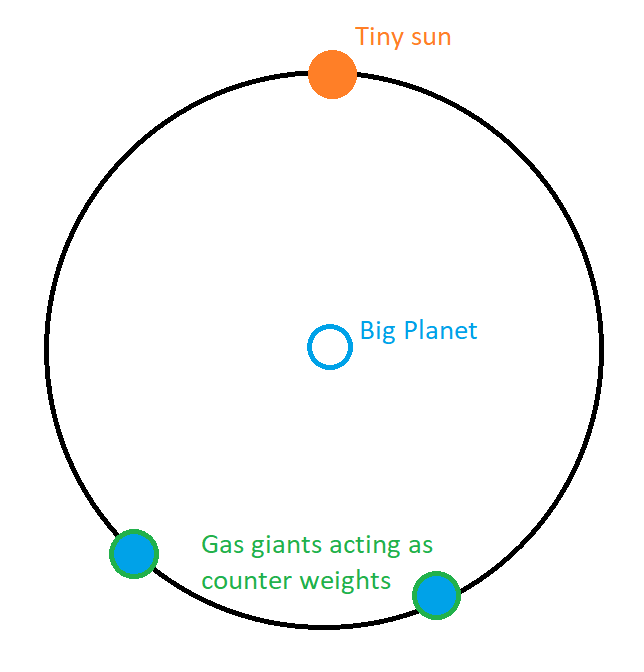 Life on the planet will be very similar to if the sun was in the centre and the planet orbited around it. Ironically, if they're aware of normal solar systems; It may take them a while to realise the sun isn't the centre, actually)

This system is highly unlikely to occur naturally - perhaps a supernova blew out a chunk of gas cloud, forming a ring of gas, which formed the star and 2 gas giants? It's a bit of a stretch. Perhaps the bodies were precisely caught in the right way, or perhaps aliens built it. This would also not be stable for millions of years, it would decay over time.

Can we do it slightly more stable? 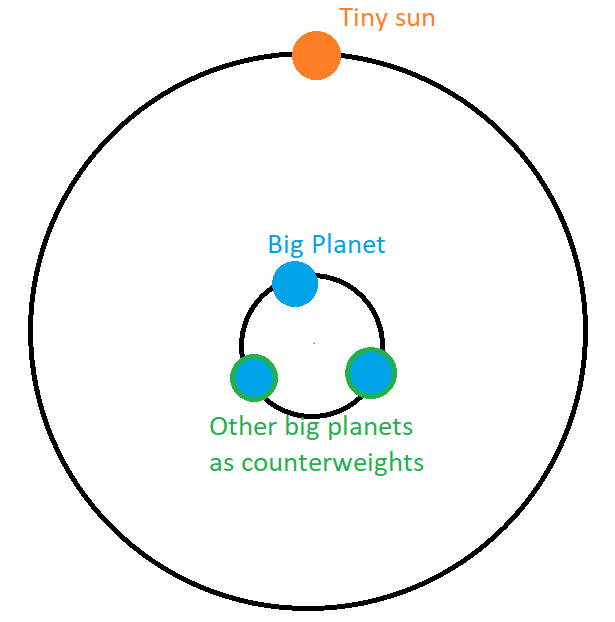 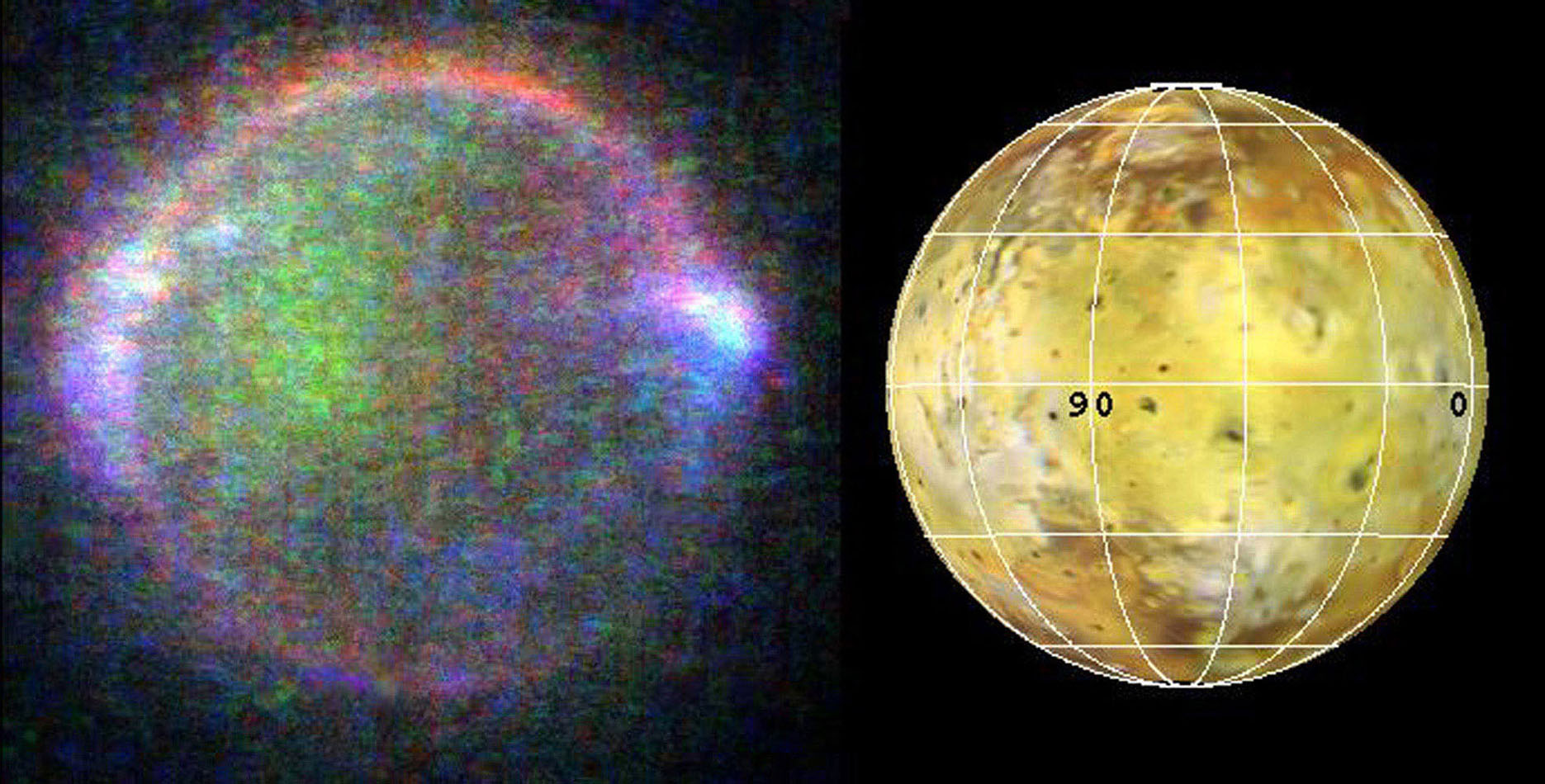 Behold the glowing sky of Io!

This eerie view of Jupiter's moon Io in eclipse (left) was acquired by NASA's Galileo spacecraft while the moon was in Jupiter's shadow. Gases above the satellite's surface produced a ghostly glow that could be seen at visible wavelengths (red, green, and violet). The vivid colors, caused by collisions between Io's atmospheric gases and energetic charged particles trapped in Jupiter's magnetic field, had not previously been observed. The green and red emissions are probably produced by mechanisms similar to those in Earth's polar regions that produce the aurora, or northern and southern lights. Bright blue glows mark the sites of dense plumes of volcanic vapor, and may be places where Io is electrically connected to Jupiter.

Io has different types of aurora. They are produced by interactions with Jupiter. Jupiter has a tremendous magnetic field and given off loads of radiation in the form of charged particles. Ultimately I think the energy fueling this is the rotational momentum of the Jupiter and maybe the residual heat of condensation when it was formed.

Just yeet out a Gas Giant

So in general, you could have such a System. If you look at the Jupiter System, it is pretty much its own "Solarsystem". You got a bunch of Moons around a Central Object with a shi´tton of debris flying around.

This could just from natrually in the middle of nowhere. One might argu that such a System is just like or one. Only smaller and with a failed star at its center.

But how do you get light ?

Good question. Id say since the Gas Giant is the middle of nowhere, it probably wont emit any light by itself. If it would, it is a Mini Star. So one way of getting a bit of light would be to have a Planet VERY close to the Gas giant. In fact so close that it melts dou to the tidal forces. But even this would be really dark. Not to mention that such a close Planet would just fall into the Gas Giant in a very short amount of time.

You could try to go all Meta and have a lifeform on the Gas Giant that is Bioluminescent for some reason. Depending on the sizes of the Gas Giant that may create enough light for something. But i am not quiet sure why any life form would decide to go that way in the Darkness of Interstellar Space. Maybe because of some Aurora but even that is a real streatch because, where does the Aurora come from ?

But i would still assume that a Bioluminescent Gas Giant is probably your best bet of getting any amount of light. Even if it still is almost nothing. Such a Gas Giant would probably by hardly any more bright than or Moon.

Your main source of Energy in such a System isnt light anyways. Its the tidal forces. And the first life on earth really didnt need light so it might very well still start. But i dont see how life would get complex if every Moon around the Gas Giant is a frozen Ice ball.

The Stars in the night sky would be pretty though.

This is not a realistic scenario, but may work for a sci-fi universe.

Imagine a rogue planet with some orbiting moons out in the darkness of interstellar space. Also imagine some alien race that can construct low-mass (less than a star) wormhole-like portals.

They construct a pair of such portals, one in orbit of a star far away, and one in orbit of the rogue planet. The mass of the portal is not enough to cause the planet to orbit around it. The portal also lets heat, light, and radiation flow through. This may be enough to allow some life (seeded by the alien race) to develop on the planet.

From the perspective of beings on the planet, they see the "sun" rise and set like we do.

Maybe it is part of a Truman Show-like experiment for the aliens.

I suppose in theory you could somehow have a planet that was massive enough to be a red dwarf but which was predominantly elements heavier(*) than hydrogen and helium. So the core of the planet would be hot enough and have a high enough pressure to fuse hydrogen, but it's choked by carbon and heavier elements which it can't fuse, pushing hydrogen and helium up to less-dense levels of its mantle. It would still probably be able to fuse deuterium above the core, though, which would basically leave it as an oversize brown dwarf.

You could then pair it with a minimal-mass red dwarf and have what would effectively be a binary system with the brown dwarf as the larger of the two primary bodies. Smaller planets and moons could then be added as required, either orbiting one or the other of the two dwarfs as moons or orbiting the system barycenter as planets in their own right.

Just to be clear, though, this would require enormous amounts of heavy elements. There would be the equivalent of multiple Jupiters or several thousand Earths in the core of your brown dwarf.

(* - to be clear, when I say "heavy" or "metal", I'm using the astronomer's definition of "anything heavier than helium". So, carbon, oxygen, nitrogen, and on up to mostly iron at the top end.)

14
Can a habitable planet have mini-suns (i.e. solar satellites or glowing moons)?
1
How would a solar system of solar systems work?
20
How would other planets in a solar system be affected by the disappearance of one planet?
13
Can two stars orbit each other but each have their own planets in stable orbits?
6
How To Make an Earth with 27 Suns Work, Attempt Two: Orbital Stability
26
How can a planet have a deadly eclipse-like "spotlight"?
3
Could a planet form from the remnants of a star and its solar system?
4
What are the odds of a binary solar eclipse?
6
How plausible is my solar system?
17
Where could we add a new planet to the inner solar system?