In the main palace in my world, there are no soldiers or guards, and in their place, there are musicians. This is because the musicians have instruments that double as weapons, and they have been trained to provide entertainment for the royals as well as to finish off any intruder that sneaks inside the palace.

My question is, what would be the most seamlessly hidden way of implementing a weapon into the musicians’ instruments, and kills the intruder the quickest and most efficiently?

Their instruments are mostly lyres and harps with a violin player as well.

The technology they have access to is advanced enough for blades and arrows and small firearms such as pistols (no automatic targeting or sensors or things like that) but they do not have many synthetic resources, instead they use materials such as metal or stone.

(Edit: I tagged my question as science-based because I preferred to have real-world answers, but if you have an interesting idea that’s not really realistic please do share anyways!)

The weapon is the music.

Dancing mania... was a social phenomenon that occurred primarily in mainland Europe between the 14th and 17th centuries. It involved groups of people dancing erratically, sometimes thousands at a time. The mania affected men, women, and children who danced until they collapsed from exhaustion... Affecting thousands of people across several centuries, dancing mania was not an isolated event, and was well documented in contemporary reports... Often musicians accompanied dancers, due to a belief that music would treat the mania, but this tactic sometimes backfired by encouraging more to join in.

Your musicians do not strangle people with their bowstrings. They change the song. And then, everyone dances. They have to. They cannot resist. That includes the court and bystanders too – everyone who can hear it except the musicians.

The deaf drummer will leave off and escort (or carry) nobility and innocents out of the room, or pass out wax earplugs. Then everyone watches the intruders dance. Dancing to exhaustion is the standard thing, after which the intruders are carted off. But there are other ways they can change the music and other ways this story can go - worse for the intruders and possibly more entertaining for the patrons. Or frightening.

These are not ordinary musicians. They are kin to river sprites, and the Pied Piper of Hamblin. They are treated respectfully, and they are always paid.

Musical instruments are very fragile. They are designed around the sonics of the instrument and not around the durability; often made with soft woods. Even modern metal instruments such as trumpets, saxophones and flutes have a lot of small fragile parts that could be easily damaged. Finally the instruments themselves are usually created by master craftsmen which would cost 10x to 100x more than a brute soldiers weapon.

Old world style reed instruments such as the modern recorder could be quite large and while they are still fragile they might be used as a blunt weapon without taking too much damage. You also have more flexibility if the focus is on the durability and level of pain that could be caused over the quality of the music coming from the instrument.

So traditional soldiers weapons would not work, but they could use more subtle skills:

I would see these soldiers more like martial artists who use their weapons more as distractions like Jackie Chan than as direct weapons.

You wrote science based so this does not answer your question, but there is an interesting story using instruments to support a magic system.

lyres- has been slightly enlarged and the end string is really thin but strong. if you take it and slam it down really hard, it will chop heads off and becomes a slicer thingy.

harps- a little big to be waving around, so the wires can be removed and used as a garrote, or some have handles and become whips.

violin- a rifle barrel is hidden just inside the neck of the instrument and the hollow body holds ammunition. Trigger could be anywhere you want, really. Point towards the intruder and bang. Might need some spare strings though.

Instead of instruments themselves, use instrument's cases to hide the weapons.

This had been done numerous times in fiction.

Yo dog I heard you like weapons so we put an axe into your axe so you can kill while you kill. 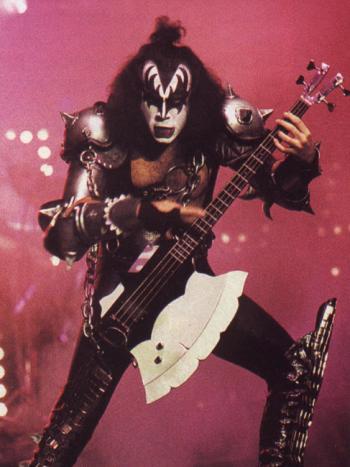 In the picture above you see Kids In Satan's Service bassist Gene Simmons, who built his bass out of a real axe shaped like an actual axe. It's not sharp, but is perfect to give someone else a beating. Other insane people have made electric guitars and basses built with child coffins (could do for a blunt weapon), microwave ovens (same), shovels, and videogame consoles (old consoles were quite solid and sturdy, so again, nice blunt weapon).

A tree cutting saw can be used as a musical instrument if you rub a violin bow against it. It would also make for a weapon.

To give the drummer some love, the butts of the drumsticks can be made sharp.

Finally, the vocalist can take levels in bard with a prestige class in metal so they may provide the audience on your side a +3 to hit and +5 damage mosh pit bonus.

8
Dragons and aviation bureaucracy, the sequel: Dragons on Instruments!
8
Creatures with weaponized tails
35
Which fast STL drive could not be weaponized or results in perpetual motion?
4
Using magnetic fields to prevent a weaponized warp drive?
5
Gravity being weaponized for its time altering properties
0
How could a weaponized asteroid remain undetected until its too late?
2
How Feasible are Weaponized Wings for Flayt?