Evolution of Earth languages on another planet

A group of humans in ancient times spoke a Proto-Indo-European language. They were taken to another planet thousands of years ago and placed in a time dilation bubble that allowed their society to rapidly advance. Their community managed to remain in the same geographic region until they developed technology allowing them to communicate across distances. As a result, even as they spread across the planet, their languages had little diversity. After a few thousand years on the planet, they managed to reunify their dialects into a single language before setting out to explore the stars.

Would it be possible for this society to have elements of Greek, Hebrew, and Romantic pronunciations in their language?

Yes, it would be possible.

Probability is way harder to determine. But most likely, just due to the possible combinations and time apart, we wouldn't have more than a couple words in common. We'd even have difficulty communicating with someone one or two nodes back from our native language on the language tree. 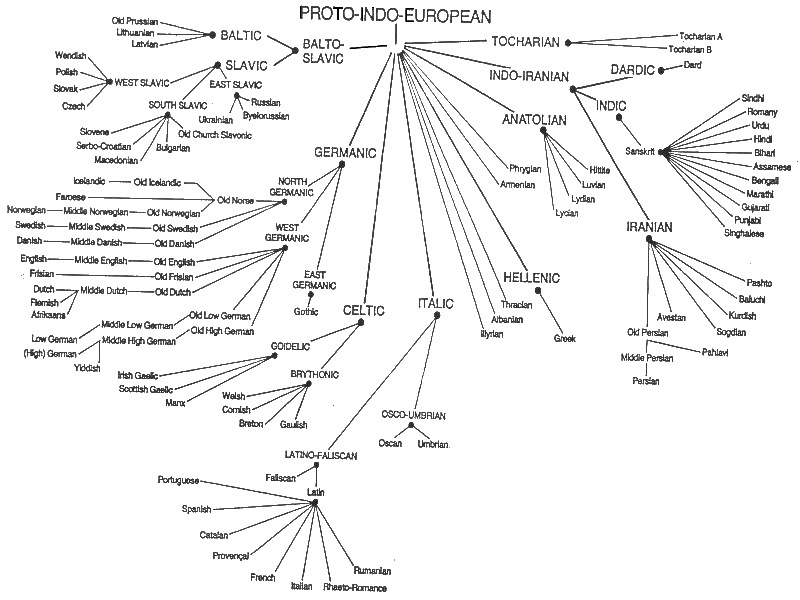 Facial expressions wouldn't necessarily be the universal tool for communication either.

However, we would very likely be able to develop communication with them far more easily than with a completely alien species. I doubt it would be significantly more difficult than learning to communicate with a foreigner on Earth.

Sometimes languages develop diversity for other reasons than geographical separation. American English and British English have differences which were introduced by choice during and after the American Revolution (Revolutionaries made a point of eliminating the use of the letter "u" in words like colour/color, labour/labor and so on). French was a very disjointed language which was "standardized" during the French Revolution to make the "Parisian" dialect the "official" version of French, but even now French speakers in places like Brittany, Normandy or the Province of Quebec have very distinct pronunciations and dialects different from Parisian. For that matter, the UK is a very small nation, but the regional dialects between Northern, Southern and "London" English are pretty extreme (and that is before you start taking Welsh, Scottish and Irish speakers into account...). Working with British soldiers, I found them to be almost impossible to understand, except for the officers who spoke what we might call "BBC" English.

As peoples become more numerous, various regional dialects, slang terms and different rates of development and adoption of new technologies will cause the language to morph. They may all speak evolved PIE in your world, but regional differences may still make understanding PIE between PIE speakers as difficult as understanding Americans vs British vs Caribbean vs Indian English speakers today.

On a very technical level, your PIE speakers will have a common language and commonalities with some of modern Earth languages descended from PIE, but on a practical level, not so much.

I would like a clarification on the Greek, Romance elements part, those elements arent exclusive to those language they exist across all human languages so theres no reason to believe that Modern Indo European wouldn`t show them.

That being said MIE would be very different from any modern day European language in a fundamental way, the fundamentals of European languages are not just determined by PIE but also by the other tribes and languages in the area, in the same fashion that modern day Chinese languages are actually a mix of proto-Tibetan with several native languages spoken in modern day Henan province. This fact is often forgotten because those tribes went extinct long ago and the history books are written by the survivors.

A viable method for creating MIE would be to catalog changes that seems almost universal across PIE languages and apply them to MIE, assuming them to be natural tendencies of the language. Using languages like Sanskrit and Lithuanian as reference. The result would look roughly like that-

4
What is essential to creating languages?
7
How many languages can a person know at one time?
2
Language shift over a long period of independent development
8
Social engineering: Design a new language for a totalitarian state obsessed with scientific advancement
8
Are oligosynthetic languages feasible?
6
How long would it take these two languages present in a common area over a LONG period of time to merge?
3
Language Creation and Development as a Result of Unification
8
How long does it take for languages to diverge?