How can travel between pocket realms only be possible through an inner plane?

The world of Lannisteria is is broken down into separate realms known as the 7 kingdoms. These inner planes exist in separate dimensions called realms, and are separated from each other. Along with these continents are smaller landmasses that exist alongside them in dimensions called demi-realms. These are smaller worlds that are each tied to a larger realm as satellites. A realm can have several satellite realms or a few hundred.

These continents are interconnected through the use of portals, which can be used to travel between worlds. However, demi-realms are not capable of traveling to other satellites directly. They must travel to the main realm first in order to get access to any of the other demi-realms. Even if the demirealm of their destination is a satellite of their own realm, they would still have to go through this process in order to reach it.

This is ridiculously time consuming and expensive. Going to a satellite next to you on the geographically cosmic plane would be a shorter and cheaper journey if direct travel occurred. However, attempts to rectify this have failed. Having to use the main realm just to get there is like going from New York to New Jersey, but having to go through Beijing.

How can this be the case even if satellites are next door to each other?

Traveling through the ethereal nothingness between realms is a rather daunting task, even for skilled mages. It's best done very slowly and methodically, and with the expectation that a good day is one where you're not eaten by beings from beyond space and time, rather than one where you get where you were going.

Since this is an awful state of affairs, the great magi of old collaborated to place a beacon at the crossroads of the world that's visible in the space between realms. Using this beacon as a reference and traveling in a specific direction from it, it's possible to be mostly confident about where your portal ends up, close enough that other mages on the destination side can "catch" you and compensate for any small errors. Likewise, you can point a portal back at the beacon from whatever realm you're in with ease.

However, if you travel off the line of the beacon, you're in no-mans-land. Not only is it extremely hazardous, it's virtually impossible to navigate because the only landmark is the beacon itself; unless you're traveling back to the crossroads, you don't know how to get where you're going.

In theory, with a lot of mages and a lot of maps and a lot of people fighting off the beings from beyond space and time, you could chart a stable bridge between two different realms. In practice, though, the scale of the project means the day-to-day needs of the realms have to come first, and it remains untested.

Entry to the minor realms is only possible if you've gone through the correct application process, gotten the visa, filled out the forms, gone through the background check, and paid tariffs / duty / etc on anything you're carrying.

Entry through other means is technically possible, but illegal due to unpaid taxes, etc.

The boundary between the realms and demi-realms is filled with dangerous warped magical fields that make travelling between any two of those problematic. The smaller the place, the more intense the warp around, sort of like tidal forces around heavenly bodies. As such, going from one demi-realm to another is exponentially more dangerous than going from a demi-realm to a realm, which is metaphysically larger and has a gentler, smoother warp around it.

Safe passage requires some infrastructure of transportation to be built between any two of these metaphysical places in order to create a (mostly) warp-free passageway, these are the portals. Portal infrastructure rely on a mechanism to create a warp-free corridor between the two endpoints. The complexity and pricing of the necessary infrastrucutre is contingent on the combined warp around both endpoints, so creating a passage between two demi-realms might be technically infeasible or finantially improbable.

Assume that for a portal to exist, one end of it must be connected to something with enough mass/energy/magic/technobabble to keep it stable, or even form at all. So realm-to-realm travel is simple, because each on its own is large/powerful enough to keep portals stable. Realm-demirealm is fine, because the larger realm is able to sustain the portal by itself. Demi-realm to demi-realm, however, doesn't work because even combined they don't provide sufficient [whatever] to form and maintain portals between them.

The large planes exert such an effect on travel between the demi-planes that it's effectively impossible to travel from one to the other. Your path would be too warped by the presence of the large plane. Only a direct route from the large plane can be "straight" enough that you can make it to a demiplane.

In space no one can hear you gasp for air

Ever seen the cosmology of the Middle Earth? Arda is a WEIRD planet! It was originally flat, but was transformed into a proper planetary shape at some point. It is still connected to another planetary mass by a sea, to the despair of everyone trying to understand gravity while living there. 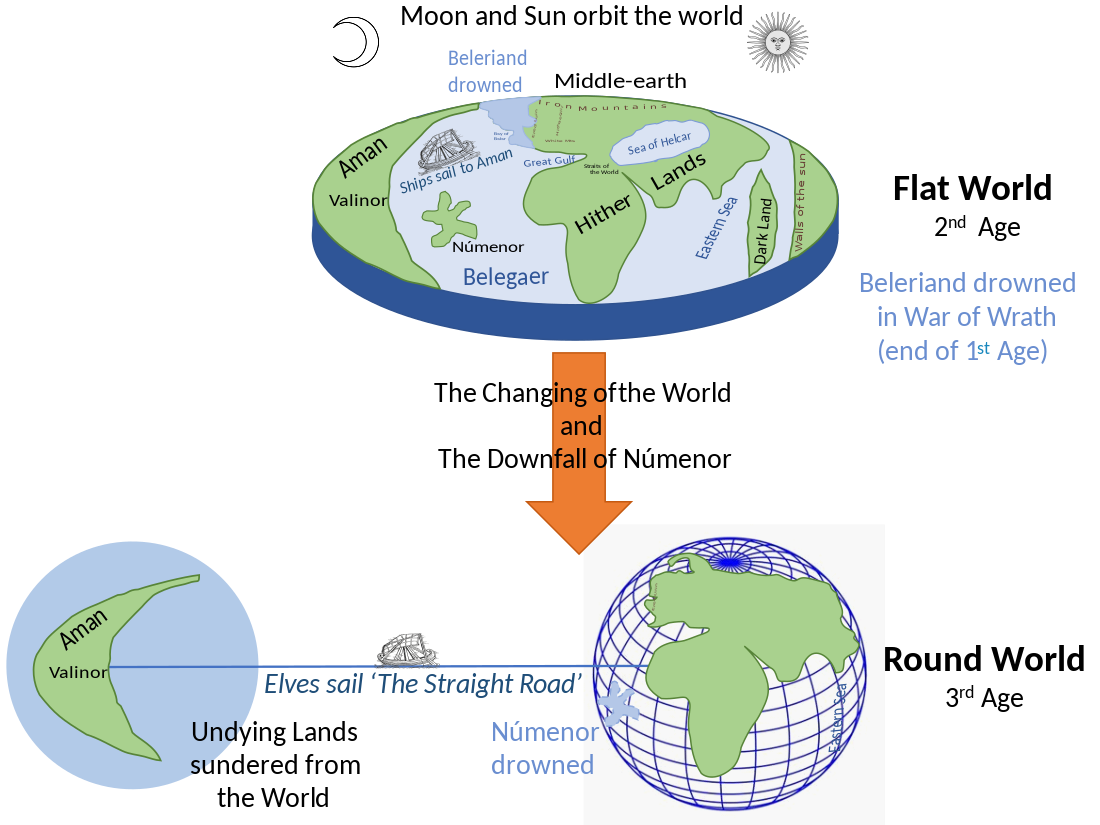 Source: the wikipedia article on the cosmology of Tolkien's legendarium.

Your world is kinda the same, with a gate at the end of each "straight road" which you happen to call a portal. If you wish to bypass a portal to the main continent so you go a shorter distance, besides having to achieve escape velocity you have to deal with haed vacuum.

Imagine taking the Space Shuttle to go from New York to Los Angeles, of from London to Halifax. It's just so much more expensice and complicated than the usual methods of transportation that it's just not worth it.

When you create a portal you put one opening next to you and have aim the spell to determine where the other end goes. Because the distances are so great you need entire colleges of mages and massive amounts of mana. Hence the spells are wildly inaccurate. I mean hundreds of miles off target on a good day.

If a satellite realm is 10 miles across there's little chance to open a portal from this side. Best case the spell fails. Worst case the portal opens into a particularly volatile portion of wildspace and the entire circle suffers critical existence failure.

The only safe way is to open the portal from the other side. That means navigate the wildspace between realms (knowledge long since lost) to reach the satellite realm. Then cast the spell towards home. The main realm is huge so even when the spell is 200 miles off target it hits the next country rather than opening into wildspace.

For the same reason casting portals from one satellite to another is a no-go.

This explanation is easier to understand if you're familiar with linear algebra.

Travel between the 7 realms is still possible because they are connected, forming a heptagon in my earlier representation. Each corner of the heptagon has a bunch of perpendicular paths towards demi-realms sticking out of it and one realm on one of the two lines that forms the corner.

Not the answer you're looking for? Browse other questions tagged transportation travel or ask your own question.

10
Mass transit across the solar system
0
How far could a maglev elevator travel in two hours?
2
How would a species in one dimension with its own properties go to another dimension with slightly different properties?
4
How far can a person travel by foot in a month
24
How to explain that there can only be one magic portal between a planet and another
13
How can caravans safely move between towns despite threat of monster attacks?
3
How can I build an inter-dimentional transportation system between pocket realms?
9
Logistics in a World of Floating Islands Sans Airships