Which countries today might realistically become “anti-IQ” in a future world divided between “anti-IQ” and “pro-IQ” blocs?

I am in the process of imagining a world in the late 2020s which is divided into two blocs:

The A culture tends to be determinist, racist, and while the acceptance of the existence of statistically "unusual" cases is officially recognised, mostly "education" is provided within a rigid neo-feudal caste system. In the B culture, meanwhile, a way is found so that no educational preference is given to anyone on account of who or how clever their parents are, not even as such considerations might be mediated through how rich they are.

Thus there is a "clash of civilisations".

Ideally I would like to put some English-speaking countries into B, or at least some countries where a lot of English is spoken either as a first or second language. This is because I want there to be a fork in the English language, as the two blocs develop different words, meanings for existing words, and even syntax. So which countries might I consider?

This Washington post map describes those who answered "People from another race" when asked to pick who they would not want as their neighbours:

The above technically answers your question, but giving recent events (BLM, etc) It doesnt feel right saying the USA would be a type B country entirely. Genetics giving people lower intelligence sounds like some arguments I've heard for justifying slavery, or why only white votes should count.

So as an aside I think the USA is worth subdividing. Here's the Washington Posts racism by state map: 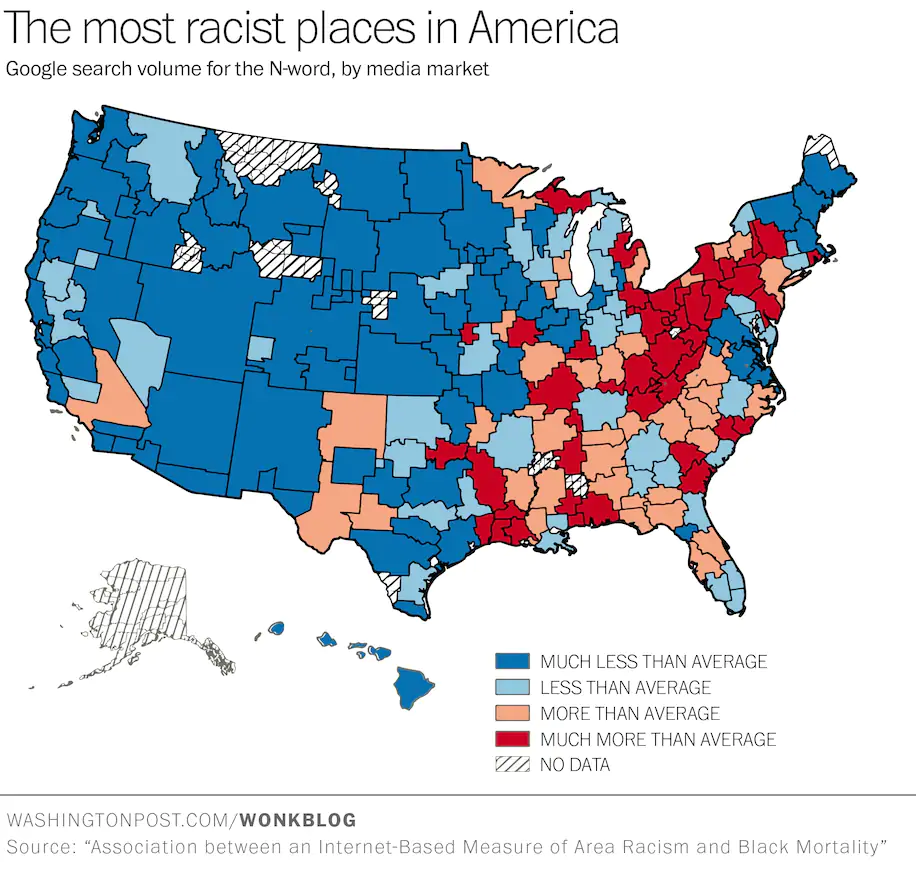 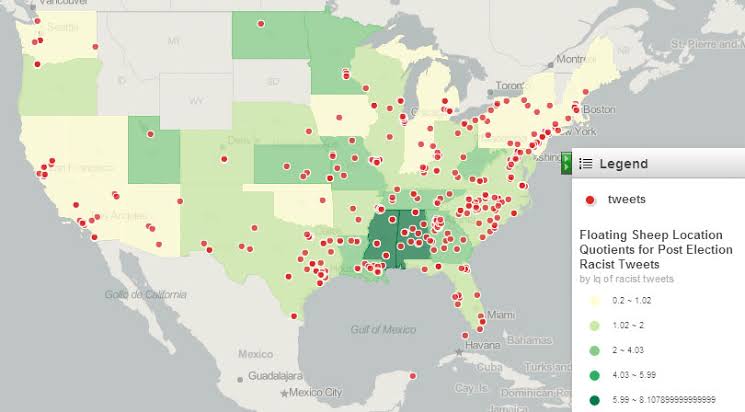 Seems pretty likely The "Deep South" and "Mid-Atlantic" are likely going to be As, rest of USA is going to be Bs.

If you take history of eugenics (some extream brunches of wich were declaring exactly your system) you clearly see that most likely:

USA and Europe had a very bad story with open rasism and discrimination. Both positive and reverse. They even had some story of actual "IQ discrimination". While in modern times there is a strong and active opposition to this ideas (and this is great) - this opposition may loose (I hope - not). And then situation described in quiestion may arise.

But if you take communist countries, Russia (both czar's and modern), most islamic countries and alike - you would see large problems with social and religiuos descrimination, but no pure open rasism. Man of every nationality or skin color can become a "master" or a "slave" (take, for example history of Pushkin's family). More over in this countries there is no idiological movements wich contain ideas close to protestant predestination (i.e. that you status is predefined long before your burth). And even more over - USSR and comunists prohibited and activle persecuted those who propagated ideas of eugenics and "general intelligence" or "social predisposition" inheretance (since it contradicted marksism). Some times even too activly (persecuting Mendel's genetic).

So all those contries has no both strong opposition to rasism and discrimination and strong rasist/dicriminating movements and ideologists (while every-day discrimination may be quite strong - like those of women in islamic countries). This question is just very low on the list of actual problems for them (with social or religious problems being on the top). This means that unlike in western countries there is no strong force in reality that can come to power and setup this "pro-IQ" (or any other rasist or descriminating) ideology as the main political agenda. But while many of this countries are in opposition to USA they would also oppose "USA&Co" to force any ideology. And thus would become "anti-IQ" if USA and those who it leads would become aggresivly "pro-IQ"

What I can't really say what side China, Japan and Far East countries in general would choose. Many of them depends on USA or Communism. But, say, for Japan nationalism is far more important than any IQ questions and this can not be realisticly changed. So I think that most of them would be neutral to IQ ideology, but would support their allies as allies.

That said, it is also fair to include in any consideration of this metric the wealth of a nation; so, any country with more wealth than education will likely be at the forefront of the Type A movement. And countries with more education than wealth like will probably be members of the type B movement. When wealth and education are relatively the same, I would assume that one should use average education as the tie breaker since a largely educated population often results in a higher average income anyway and a poorer nation may feel presured not to edjucate everyone because they simply can't afford to.

So, based on the Maps Below I would guess Type A would be most of Southern Asia, Central America, and Southern Europe. And Type B would be Northern Europe, USA, Canada, Australia, and Peru. The remaining countries are a bit harder to predict but I suspect diplomatic factors would come in where by most nations would side with their most important allies' stances. 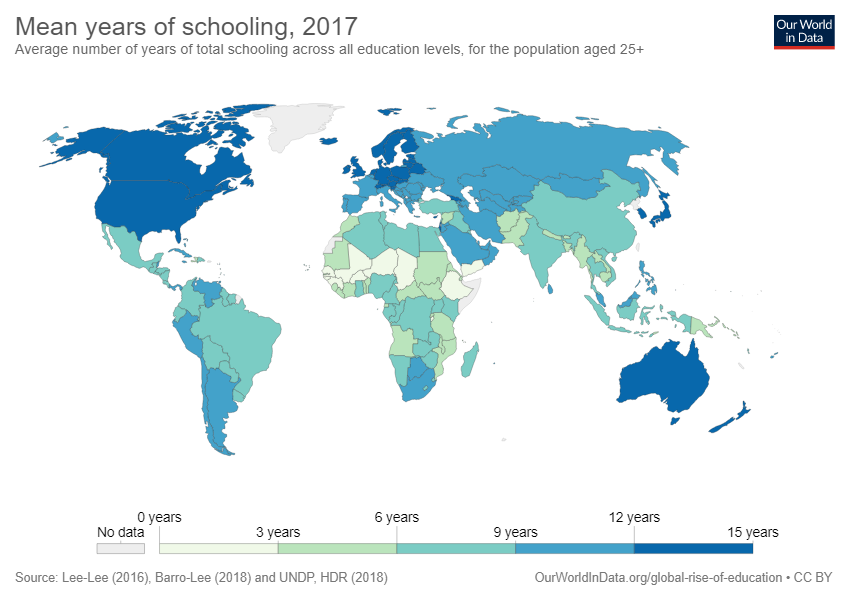 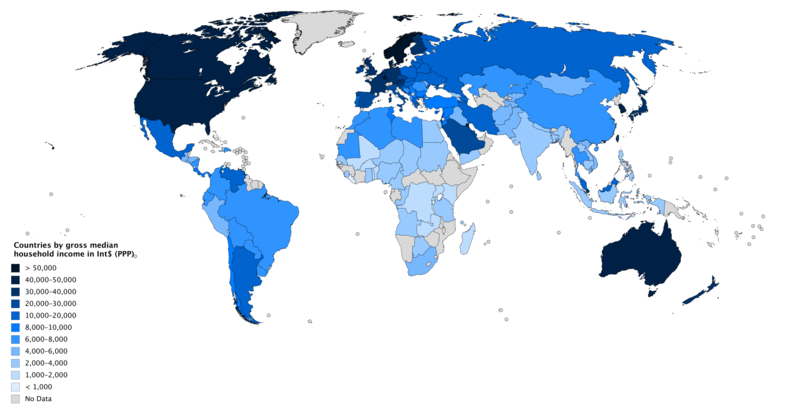 Ideally I would like to put some English-speaking countries into B, or at least some countries where a lot of English is spoken either as a first or second language.

The interesting question is actually whether or not at least one English-speaking or even broadly Western country finds its way into A.

Blank slatist ideology, which denies group-level and often even individual-level differences in intelligence ("IQ is a social construct", etc.), is the dominant ideology of the West, and of the US in particular. This is ironic, given that the West never went Communist. But history works in funny ways. Cultural Marxists have de facto attained "cultural hegemony" even in the West, while "really existing Communism" conserved folkish understandings of race, ethnicity, and sex relations in Eastern Europe and China.

You have much less freedom to research these topics in Western universities than you would, say, in Russia or China. (It is not a good idea to do that in the same way, say, that one would be unwise to build a career on honestly researching the history of the Great Leap Forwards famine in China). Papers that come to the "wrong" conclusions on these topics are retroactively retracted. Intelligence researchers are subjected to waves of harassment by politicized mobs.

Actually, the very fact that the very first response to this question is "In before the lock" really says it all.

Not the answer you're looking for? Browse other questions tagged culture intelligence or ask your own question.

7
Intelligent Animal Politics
8
Social engineering: Design a new language for a totalitarian state obsessed with scientific advancement
31
What event would cause a huge, dominant nation to adopt the language of a smaller, inferior one?
5
To what extent can a language deviate as it evolves separately from its parent language in 50+ years?
4
Could a language based on absolute pitch develop music?
10
Is technology a natural consequence of civilization?