Yellow sky with a breathable atmosphere?

The main character in my novel-in-progress is an alien whose home planet has a yellow sky. This planet orbits Altair (an A7 main-sequence star) and has a nitrogen-oxygen atmosphere similar to Earth's, with a few notable differences:

The air doesn't have to be human-breathable, but I need the reverse to be true. Toxic gas(es) would be pretty cool, but I don't know if it's plausible for the native oxygen-breathers to be unaffected. I've been told any particulate matter would settle when it rains, which isn't what I want; I'm looking for a permanently yellow sky. I've also considered the possibility of airborne microorganisms, possibly above the cloud layer (and thus not disrupted by rainfall), but I have no idea if that's plausible.

Is a yellow sky possible, given these constraints? How? 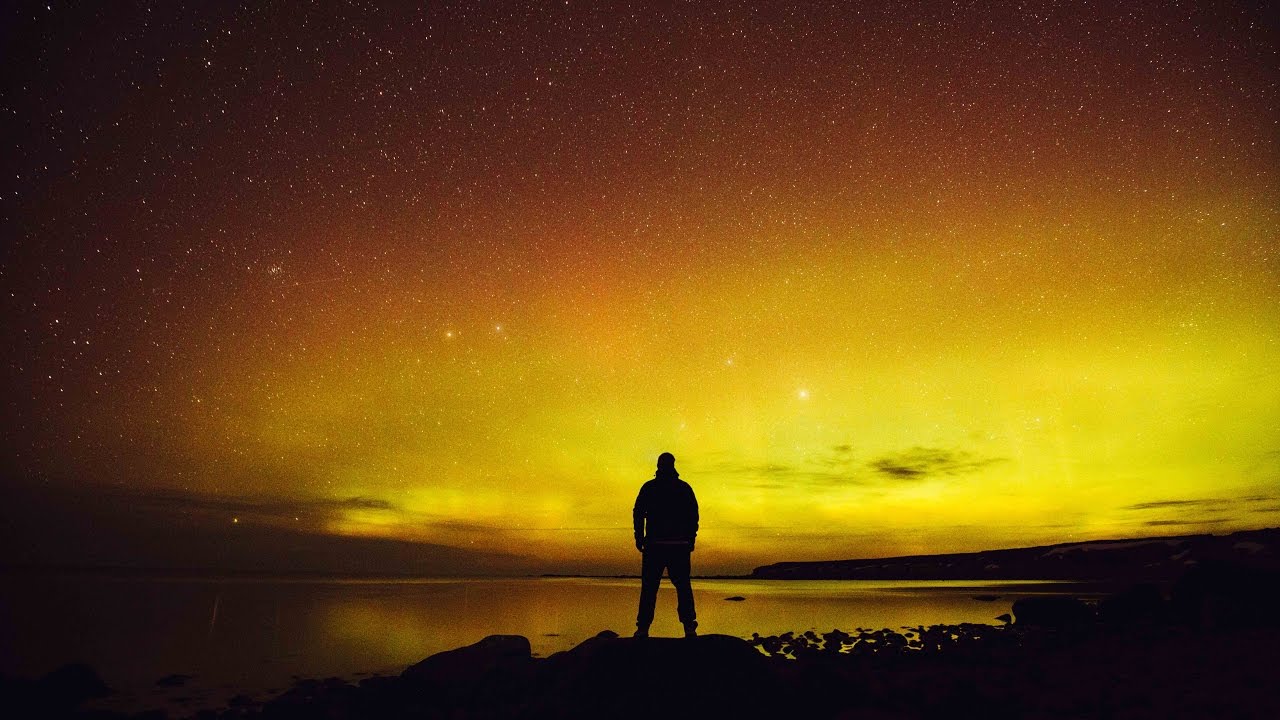 Yellow is one of the colors possible for the aurora on Earth. Yellow is caused by charged paticles in the solar wind striking oxygen high in the atmosphere. The oxygen then emits yellow light.

This happens constantly on your planet. Because of the near constant haze, the pure yellow light emitted by oxygen is diffracted in the haze, such that the entire sky glows yellow.

The air colour is caused by a physical phenomenon, the Rayleigh scattering. Absent this, the air away from the Sun would appear black, since there would be no light coming from directions others than the Sun's (basically the same that happens in space, or going high enough in the stratosphere: from the directions where no direct light source exists, we see no light, and therefore -- black. With stars).

Increasing the pressure will cause more scattering, the Sun will appear redder and the sky a stronger blue. Also, more light will be absorbed, so a darker shade of blue too (and finally black again, but without stars this time. You'd need a lot of atmosphere to do this, though; or lots and lots of suspended particulate matter, as in a nuclear winter).

The light arriving to the "far sky" has no appreciable yellow component. So, we need something to actively produce yellow light, for the sky to appear yellow. Willk's answer has a very elegant solution to that.

The only way out I could see was your idea of a dispersed chemical. This would absorb the ultraviolet band, of which an A7 star has lots, re-radiating in the 580nm yellow band either through frequency halving or, much more common, yellow phosphorescence. Possibly some simple sulfur compound might do, and this could be continuously supplied by volcanism (the sky did have a yellowish tint after the Krakatau eruption, it is said).

So the color of the Sky has a lot to do with Light Scattering. One Major factor for the scattering is the thiccnes (with double c !) of the Medium. 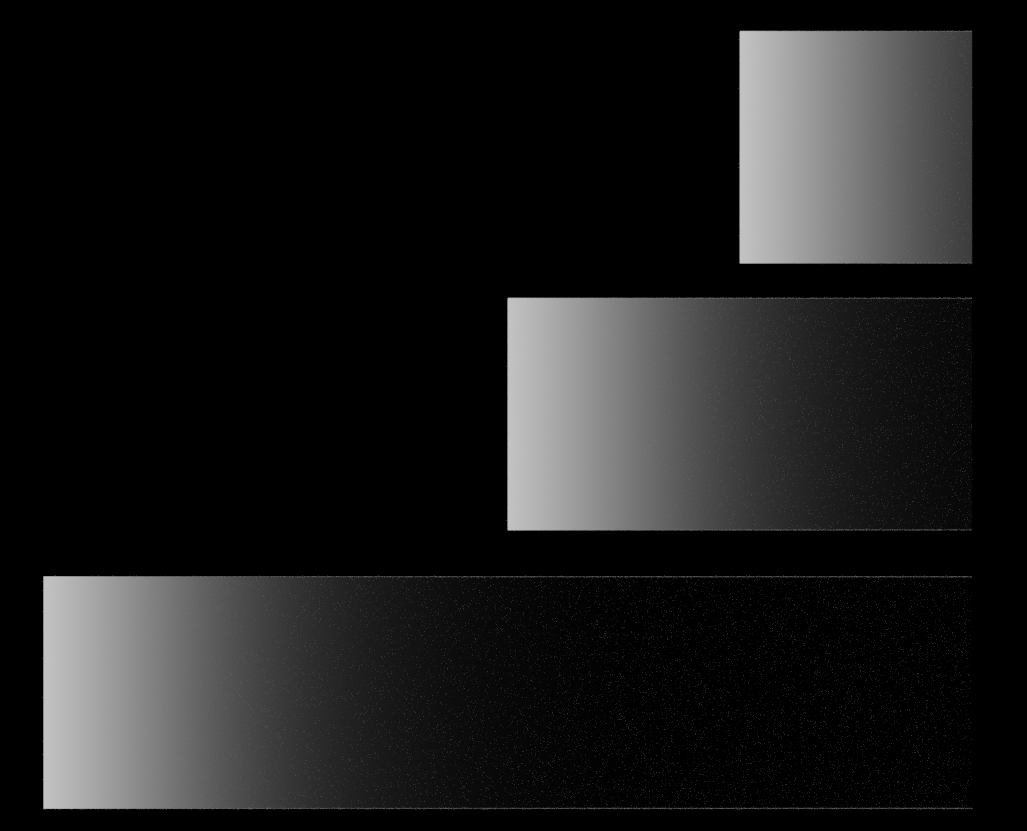 As you can see here. Now what determainds the Color of the Sky on Sea Level is the "Base Color". For example, if you have a Base Color of a Light Blue, you get this: 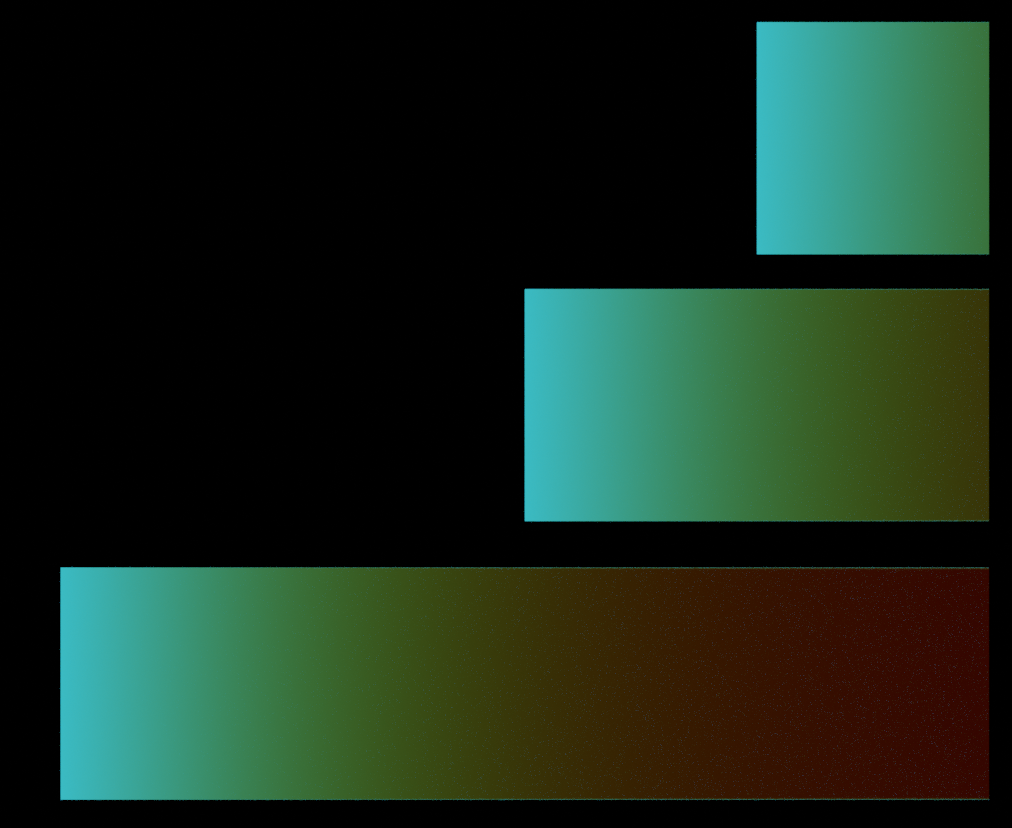 You will always end up with a Gradient no matter the base color. And lastly, another major factor is the Density of the Air. Lets incress the density to 5 Units in this example: 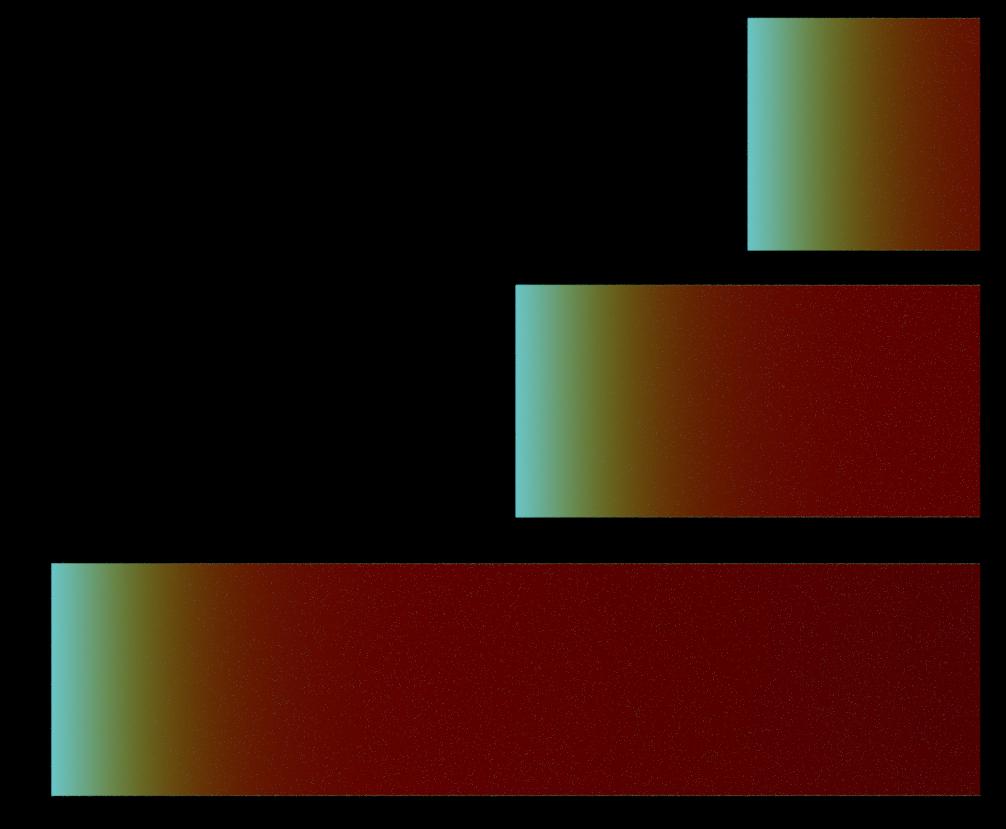 So the main give away is that Density and Hight can be used to change the Gradients Intensity. You can get the color you want with both, but as you see, a higher density compresses the Gradient. And is also more Realistic. The renders here dont take into account that the Atmosphere has a Falloff though. So Lets add that.Same base color but an Exponential Fallof for Density: 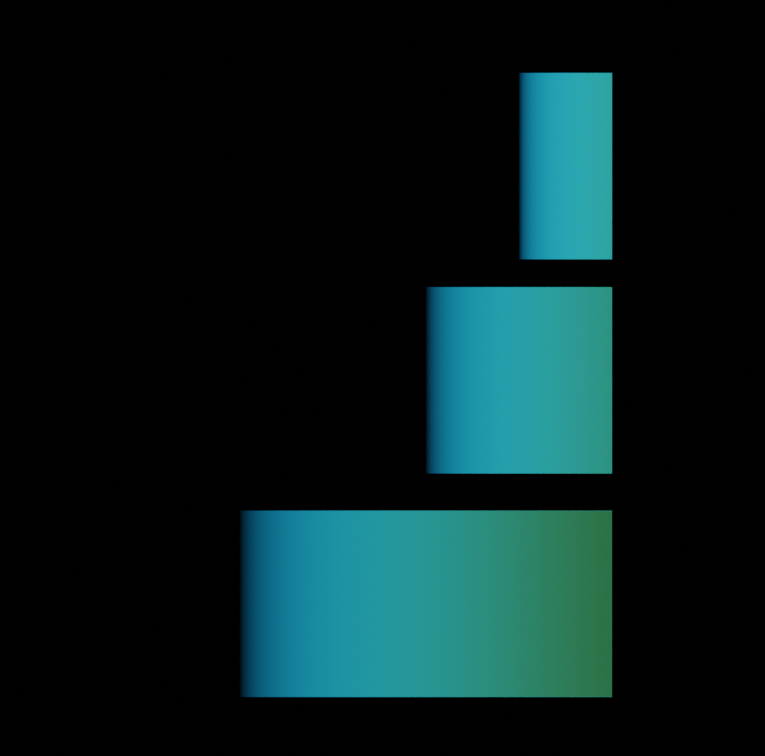 You can see how this affects things. To make a long story shot, for your Sky to be Yellow, you want the most right part of the Renders to be yellow. For that, we need to change the base color. This could work: 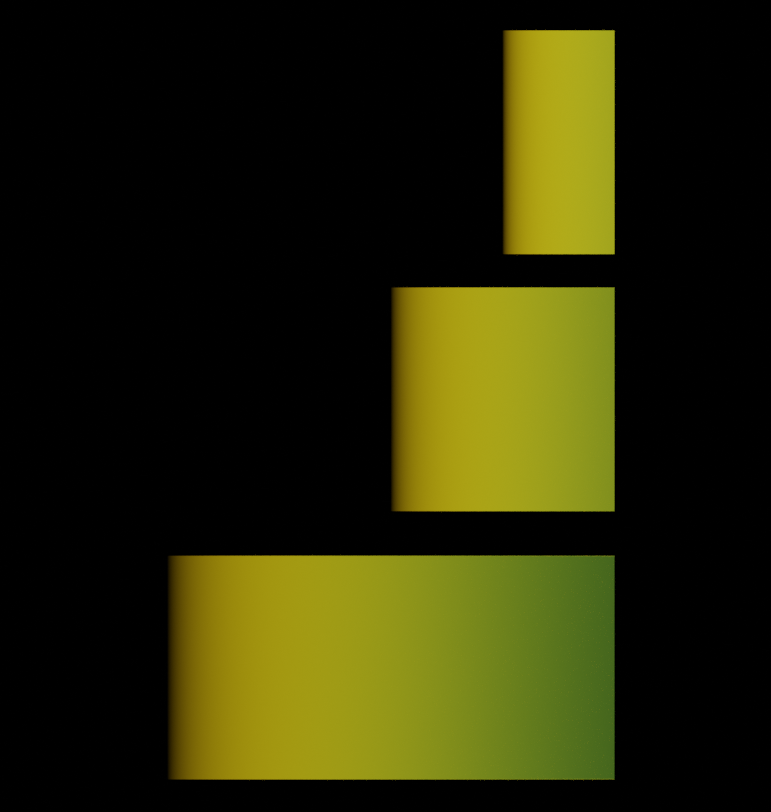 To no one's supprise, an Orange Yellow with this HEX FFD115 is a good choice. But now to the interessting part, what gases would we need ? Well...

That is not so easy to say. See, Or Sky is Blue because the Blue Wave lenghts dont get Scattered that much. That is why the sky is Red during dawn because more Blue light gets scattered. So the Color actually mostly depends on the Density of the Atmosphere, and not so much the Gases inside of it. Sure they do play a big role but in the end, it matters how long the light has to travel. Or through how much. Venus and Titan both have Yellow skys. But if you Look at the Atmosphere of Venus, you see that most of it is Carbon Dioxide with some Nitrogen. Both of which are Colorless.

To answer your question, is a Yellow sky possible ? Yes. For the most part, the Density of the Atmosphere creates the Color so a very Dense atmosphere will create a Yellow sky on the Sea Level. But the Amount of Pressure needed is sort of High. You could go a different rout and just make the Atmosphere very Larg, but this creates even more problems.

But, since you create an Alien world, what is there to say that they didnt just evolve for such high Densitys?

Your clouds are sulphur dioxide, your air is rich in S$_8$, odourless and tasteless, and chlorine (Cl$_2$) may make a contribution too; windborn iron-rich dust intensifies the yellow tint.

Your star is probably K-Type.

Not the answer you're looking for? Browse other questions tagged science-based science-fiction atmosphere .

19
Apparent Color of the Sun and Sky
33
Terrestrial Exoplanet Skies – I've Built a Visual Sky Chart. Is it Correct?
11
Color of the sky
13
What Color Can the Sky Be?
12
How to predict the color of this sky?

11
How does weather change on an earthlike planet with a denser atmosphere?
4
How would aircraft and air-life develop on High-G, Lower-Atmosphere planet?
33
Terrestrial Exoplanet Skies – I've Built a Visual Sky Chart. Is it Correct?
50
How would you know your floating island was losing altitude?
12
Alternative elements for oxygen transport in an alien blood
5
Is a planetary 'temperature inversion' plausible?
11
What color should the snow be in this chlorine world?
4
Is a dense CO2 atmosphere compatible with an ocean
4
What would the atmosphere of the Archaean Earth look like? (Before massive oxygenation)
1
How can a planet's seasons be only controlled by either its land, sky or water?