I'm working on a story where an orbital ring situated in LEO above the equator of an earth-like planet is destroyed which is a calamity for the species that used it. The ring is essential for them and most of their settlements are along the equator where they have easy access to it.

The ring is composed on an inner part that spins at the speed necessary to keep it in orbit and a geostationary part levitated over the spinning part that is connected to the surface with tethers/ space elevators. It is as heavy as needed to wreck appropriate havoc.

Edit: Quick sketch (not to scale) 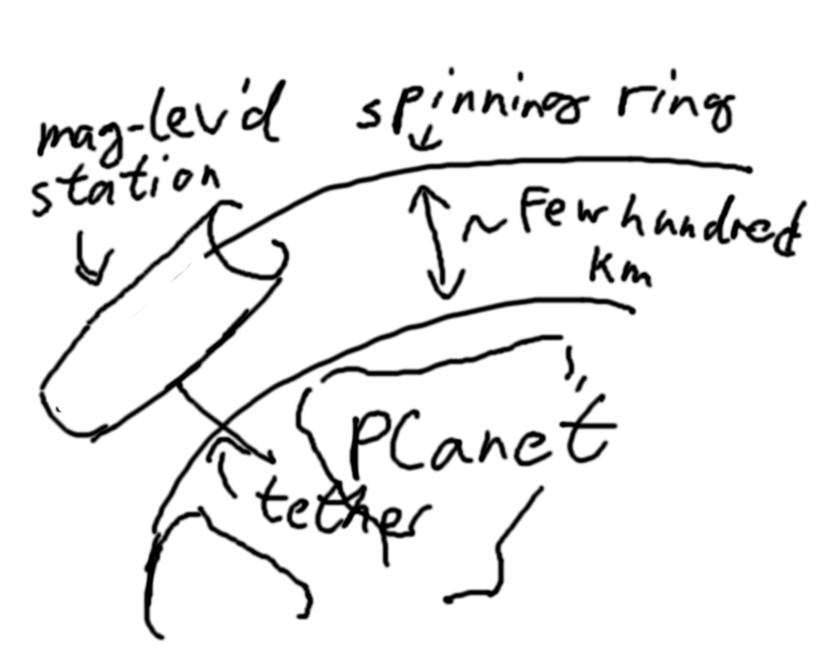 I had envisioned that it gets destroyed or damaged in a manner that de-orbits the ring, resulting in most of the material falling down and destroying the settlements below it. I also imagined that some of the material remained in orbit and continuously rained down as meteors, making the equator region inhabitable and hazardous to cross. Is that at all realistic?

Probably not much damage

After watching the linked video, there are two main points to consider (which are both noted in the video):

The only way to create the level of catastrophe you have in mind is to have a civilisation completely fail to consider failure modes at all. I seriously question how anyone could survive the initial construction process if they did not consider this - something always goes wrong at some point during a major construction such as this - but if the plot demands it then...

You may be interested in reading The Sundering - Book Two of Dread Empire's Fall by Walter Jon Williams. The construction and emergency measures of the Zanshaa ring are described in detail and are a significant plot element.

The level of damage and devastation would depend on the mass of the fragments dropping from orbit. I don't have the calculations on hand but i'm sure they've been done. However the general theory is sound - a shredded or exploded ring would lead to fragments in decaying orbits, and interaction between fragments would potentially lead to further decaying orbits as time went on. This kind of 'orbital debris cloud' is something that is generally considered to be Incredibly Bad and is actually a major worry for space exploration as we clutter our own LEO with random stuff.

One note is that if most of the debris falls down initially, you might not have enough left in orbit to produce the 'constant meteor danger'. You need a fair amount of stuff in orbit to produce the decaying orbits (unless there's other factors involved like Weird Gravity or Malicious Intervention) required for constant meteor danger, and if most of the material fell initially and you still had enough left in orbit to do that, the initial fall would be an extinction event (unless the initial fall was reduced to quite fine chunks).

You can solve this fairly simply - just have only 'some' of the debris fall initially, leaving enough in orbit for meteors and still enough dropping on people to make the initial fall (the Fall?) notable and cataclysmic.

Not the answer you're looking for? Browse other questions tagged science-based reality-check space-constructs or ask your own question.

2
Is a space elevator with wings feasible? (engineering, not economic concerns)
1
How to naturally maintain a Earth-sized Planetary Ring System and the possible periodic bombardment that can ensue?
13
Does a planet's axial tilt and seasonal progression affect a planetary-ring system, as seen from the planet surface?
22
Severed Space Elevator
11
What would happen to a man-made orbital ring/belt, if a portion of it was destroyed?
8
How high would a space elevator need to be on Mars?
9
Asteroid thicket dogfight in Saturns rings
1
Orbital tether snap like a rubber band?
8
How long would it take for a earth-based ring to break up given solar and lunar gravitational forces?