Could Prehistoric Species of Animals Eat Modern Species of Plants and/or Animals?

One of the most recurring elements of paleofantasy is anachronism. 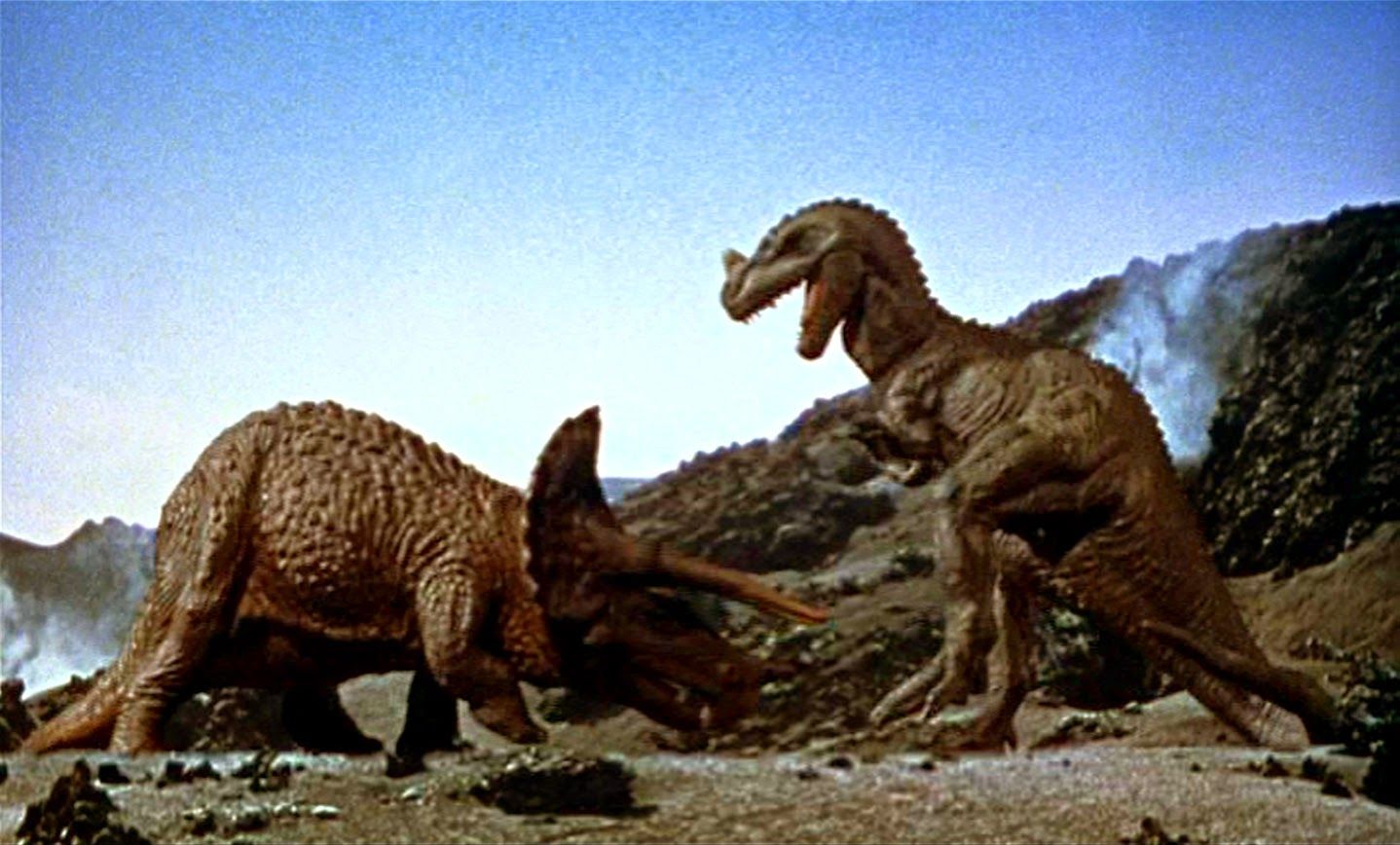 For instance, this still is from the 1966 film One Million Years BC, and yes, that is a Triceratops fighting off a Ceratosaurus, a theropod that had been dead for over 80 million years longer.

An even more extreme example of my point is this still from the 2019 Adult Swim program Primal, showing a tyrannosaur fighting a mammoth. Due to niche constraints, these sorts of fights couldn't possibly happen in real life.

In an alternate Earth, there is only one landmass surrounded by one ocean. The only inhabitants on this planet are microbes, including photosynthetic cyanobacteria. Here, a terraformer has seeded this world with modern species of plants, fungi, algae, birds, rodents, insects, land snails, rabbits, hedgehogs, worms, amphibians, squamates, marsupials, turtles, spiders and the following extinct genera:

(Marine species are still under thought construction and therefore not a factor in this question.)

But for this to work, one question could either make or break--would the prehistoric species feast on the modern species?

Now, plants have changed a bit across their history. Carboniferous creatures might find some types of woody plants like bamboo inedible, since organisms that broke down woody tissue apparently didn't evolve until the Permian. And the Cenozoic shows many groups of animals developing adaptations to feed on abrasive low-growing vegetation like plants. But the same studies that have noted that in contrast to herbivores which show varying adaptations over time to deal with changes in vegetation, carnivores remain pretty monotonous in terms of how they process meat, because meat doesn't change.

For more info Van Valkenburgh 2007 talks about the whole "meat is meat" thing.

Life has changed in form over billions of years, but the more fundamental the structures involved, the less they change. Looking at life forms that separated from each other extremely early in evolution, 670 million years ago, protostomes vs deuterostomes they are radically different organisms with no genetic transfer, yet you can eat shrimp and squid, and they can eat us. Poisons from spiders can kill humans as easily as they kill grasshoppers. That is because we all share a common set of genetic systems and amino acids that are highly conserved. If you change anything about these critical early systems in complex organisms, thousands of lethal problems immediately happen, as every single protein in the body is thrown off, or DNA replication fails spectacularly.

This is one of the reasons that compatibility of life from other planets is considered extremely unlikely. Assuming an alien life form uses amino acids for protein building blocks ( a broad assumption) there are numerous non-coding amino acids that COULD be used in terrestrial life, but aren't. In an alien life form, these alternate amino acids could easily be used in place of the paltry 22 (21 if you limit yourself to eukaryotes) amino acids used by all terrestrial life. Even the most primitive life on Earth has almost no difference in these critical biochemical systems.

Anaerobic bacteria that have evolved separate from us for almost as long as life on Earth has existed. Some of them can live in alien-like environments metabolizing raw chemicals. Yet some anaerobes cause human diseases and can can act as decay organisms on dead human bodies, digesting parts of us for food. All of the organisms in your classifications system are kissing cousins compared to them. While one species may thrive in a swamp, another on a tropical plain, etc. they all would be something a pack of hyenas today would be happy to eat -and vice versa.

Not the answer you're looking for? Browse other questions tagged science-based terraforming alternate-earth ecology adaptability or ask your own question.

123
Releasing a T-Rex into a modern ecosystem wouldn't be that bad, right?

26
Can every animal eat most other animals?
3
How long would it take for animals, plants, and insects to die off during nuclear winter?
7
Could a Planet's Ecosystem be run by a small variety of animals?
2
How Can Plants and Insects Cope With Living on a Terraformed Mars?
7
Could a Greater Number and Diversity of Marine Plant Species be Possible?
6
Could Bear-Dogs Look and Act Like Actual Bears?
10
Could Cats Add Lots of Plants to Their Diet?
3
Could an Environment Sustain Large Eusocial Animals?
5
Most important/useful animals and plants to save from the apocalypse?
5
How to Terraform a Dead Earth