How would the Weather be on a Double Planet System?

context is always important to give a good answer to such a question. So here is some data and Renders from the System. It consists of the two Planets Hela and Vesna. Hela has a Radius of 5636.492km with a Surface Gravity of 8.68m/s² where as Vesna is bigger than Earth with a Radius of 7457.535km and a Surface Gravity of 11.5m/s². The two have a Core to Core distance of 40536.252km.

Since the Planets are so close, they are locked to each other. So they dont move Relative to each other. Meaning no tidal forces in the classical sense. The close proximity does mess with Gravity a bit. This Graphic shows what i mean:

As you can see, the Center of Gravity on both worlds is shifted. This not only means that Gravity is not even close to "the same" everywhere but also Air Density changes from point to point. The side that is facing the Barycenter has a higher one.

Hela: She has a thick Co² rich Atmosphere and is covered to 63% in Oceans. Most of which are over 20km deep. Most of the Surface is covered in Forests with a small percentage dedicated to Deserts. The surface features are best described with "A Metric f*ckton of Mountains all over the place". Hela also has Bioluminescent clouds.

Vesna: Her Atmosphere is over all about as Massiv as Hela´s. Thus it is also thinner. 89% of the Surface is covered in fairly shallow Oceans. In addition to that, the Land itself is similar to Hela´s with the difference that Vesna has a higher precentage covered in Deserts.

Here are some Renders to help yall a bit more:

This Render is a size compairision of Hela (left) and Vesna (right).

This one shows the 1:1 "real world" distance of the two Planets. They are sort of close...

My own thoughts: I would assume that Hela overall has more violent weather. She gets eclipsed globaly every day which messes with the Temps. The Terrain is also very fissured with a lot of high Mountains. The Oceans are deep and the Atmosphere has a higher density. So my guess is that there would be a lot of Rain and that the Violent Weather focuses on the side of the Barycenter.

When it comes to Vesna, she does have more Water but the Terrain is mostly flat with a few Mountain Ranges inbetween. Also, there isnt much Land to beginn with so storms have nowhere to lose there energie. Just as on Hela, the more Violent weather might be focused on the Barycenter facing side. But i would expect it to be less drastic than on Hela.

But i am not a Expert.

Thank you very much !

On Earth due to the near Moon have an influence on tidals that attract a big mass of water (oceans and seas), but thet gravitational fields of the Earth it is own, for calculating a celestial body's surface gravity g=G*(M/R²) g= surface gravity G= gravitaional costant (6,67×10⁻¹¹ N m²/kg²) R²=square of the planet radious

what this mean? it means that however 2 near object in space have it's own surface gravity and it's own center of gravity (planet itself)

The barycenter is where the two planet orbiting, in this system the mechanical orbitation it's very complex because, following the graphics Hela would orbiting around Vesna (the barycenter si shift on his side) and is outside of the planet Vesna like Pluto-Charon system 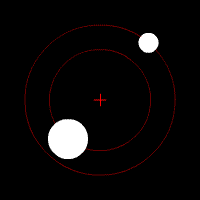 Regarding the weather, on Vesna the tidals of oceeans are more powerful than Earth because Hela is more near and assuming that the mass of Hela is in proportion with is dimension is bigger than Moon.

So having a big tidals force you have more deserted land because the shallow oceans are very stretched.

We can assume that a rotation of Vesna on his axis is like Earth, perhaps few slower, so wind condition is like on Earth, but the ocean's wave are very strong. It will rain strong with a lot of storm.

On Hela, like Vesna the tidals and waves are strong having 20km of water that are attract by Vesna. The wind is affected by the rotation on his axis. On Hela due to the large amount of water presence have a strong humidity, so fog and cloudly weather often happen, the desert zone are probably located on a Mesa on a high altitude.

For both planet, the weather conditions are very influenced by the star (like Sun) assuming that are in a classic habitable area of their system it's important knowing the distance from the star, how it can warm the atmosphere, if it's like 150 million km on both planets there're a lot of eclipses.

PS: I try to explain regading tides; We can use our Solar System The Sun is our center the next are Mercury, Venus, Earht, Mars, Jupiter and the other planets, The Sun veocity 220 km/s (orbit around the center of the Milky Way) and Rotation velocity (at equator) 7.189×10^3 km/h the last velocity it mean Rotation on his axis

Following the data above, we have Sun that are in stable orbit around the center of the Milky way, Mercury, Venus and Earth orbiting around Sun and Moon orbiting around Earth, but not only orbiting around something but to maintain this situation every astronomical body have a rotation around his axis.

the situation above are stable because ewvery astronomical body have a rotation speed and distance that can produce an evasion speed from the gravity of one another, so we have balance between Sun, the planets and Moon, when you have 2 planets like yours so near each of them exert a gravitational attract each other (Vesna greater than Hela) so the barycenter its the point where 2 planets orbit due to the attraction force (there are many type of orbit, you can have inner orbit, outer orbit and so on) it's very rare to have astronomical body that facing them, so usually we have a planet that orbit around something and rotate around his axis.

if have a 2 planets that facing them every time the force of gravitational fields of each other produce a stretching the water mass versus barycenter, that produce also a near static winding condition, because the self rotation move a big mass of air.

Not the answer you're looking for? Browse other questions tagged science-based climate weather eclipses .

8
How would the inhabitants of one planet kill the inhabitants of the other?
10
How would this tidally locked planet be affected by its moon and would the moon have a deaccelerated orbit?
5
How would the weather be affected by a constant miles-wide maelstrom?
5
Could coral float?
9
What are the climatological effects to the surface of a planet where the atmosphere gives way to vaccum? (diagram included)
25
Purple soil - how would it be possible?
1
What would the effects of zones of differing gravity be on a large volume of open atmosphere
2
Would the Oceans in This Map Be Freshwater?
4
How to maximize the sand depth of a desert planet
2
Weather in a desert planet