In a retro-future version of Earth, one of the main modes of air travel is by gasoline-powered biplane (design circa 1914). 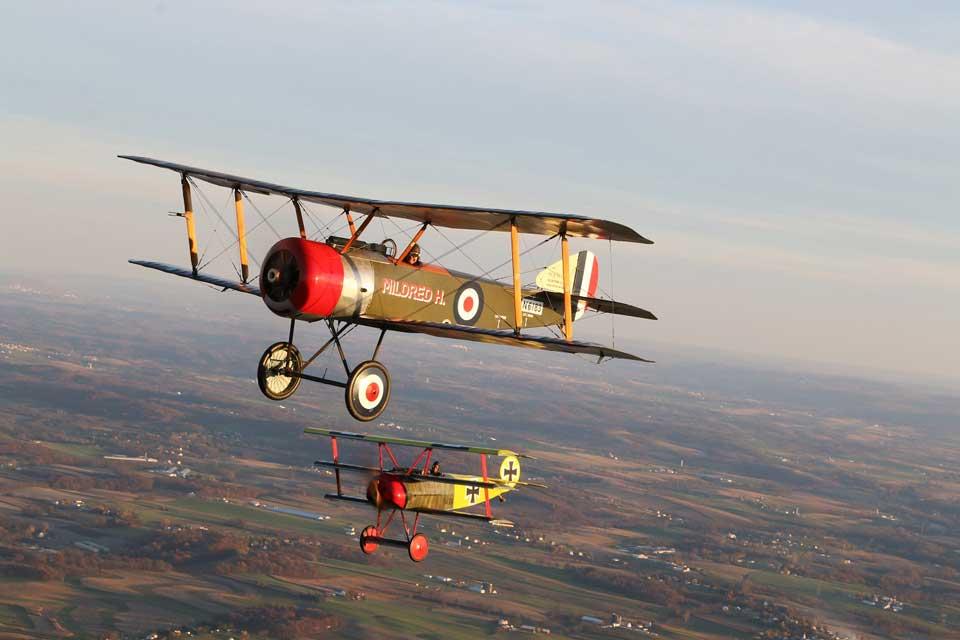 I want these to land in places where in real-life Earth only helicopters would be able to land. For example in a small area on top of a skyscraper.

The proposed method is that they fly into a large wind tunnel on top of the building. This way their ground-speed can be zero whilst the airspeed remains high enough for stable flight. By using normal landing procedures, co-ordinated visually by an expert operating the wind tunnel, planes are able to land and take off vertically within the wind-tunnel and deliver and load passengers or cargo.

Could this work in theory? What snags could prevent it from working?

I am aware that a wind tunnel has a large fan blocking the entrance/exit at one end. This is catered for by turning the plane through 180 degrees and reversing the direction of the fan for departure. To be clear, I don't suggest a tail-wind at any point. The plane is always flying into the wind from the fan.

I envisage there being a turntable supporting the wind-tunnel. It could be powered, or may even act as a huge weathervane. This will eliminate cross-winds.

The bush plane STOL records are your friend here.

No additional external technology or infrastructure, just carefully designed STOL light aircraft. The current record for landing is 9ft5in (2.87m) and this sort of thing is a bush pilot speciality.

Your world is going to have something similar, but they're going to be the tower-top pilots specialising in landing on the flat tops of tower blocks.

It's even more simple* than a wind-tunnel: simply set up the runway as a steep ramp on top of the building. The aircraft land into the wind, and the uphill nature of the runway will rapidly kill speed. Then when taking off, doing so downhill into the wind will allow a rapid gain in speed.

So, ideally a landing building would have a runway like a hat, a truncated cone, that could be approached from directly upwind from any direction, or alternatively a swivelling ramp that can be rotated to point in the required direction. The runway surface and structure should be a metal gridwork to allow wind to pass through it, otherwise the runway hat could cause disconcerting turbulence and loss of lift right before landing.

In the event of a missed landing, the pilot could go around or touch and go, where a wind tunnel would have a fan that would make that error fatal and costly.

*However, I can see that these rooftop landings would be dangerous and unpopular with experienced pilots and building owners. A landing that is missed low could result in plane-in-building syndrome, and while C1914 aircraft were light and flimsy compared with modern aircraft, some also had low-speed handling problems that would not have the advantage of ground effect to offset in such situations. Engine failure on takeoff would result in planes falling onto the streets, with likely fatalities amongst bystanders, plus disruption to road traffic.

So, while it is certainly possible, I would anticipate that it would not be something that a newly licensed pilot might attempt, but may require additional post-license training and certification, and be limited to certified models of aircraft. Of course, with sufficient demand, new pilot licensing may require rooftop landing skills.

If something goes wrong, it would be difficult to abort. Just imagine a plane trying to land and the fan breaking.

The pilot also then needs to watch two walls and a roof as well as the ground so a crosswind while trying to enter the wind tunnel could be quite catastrophic.

Easiest solution is a landing cable like what is used on aircraft carriers. 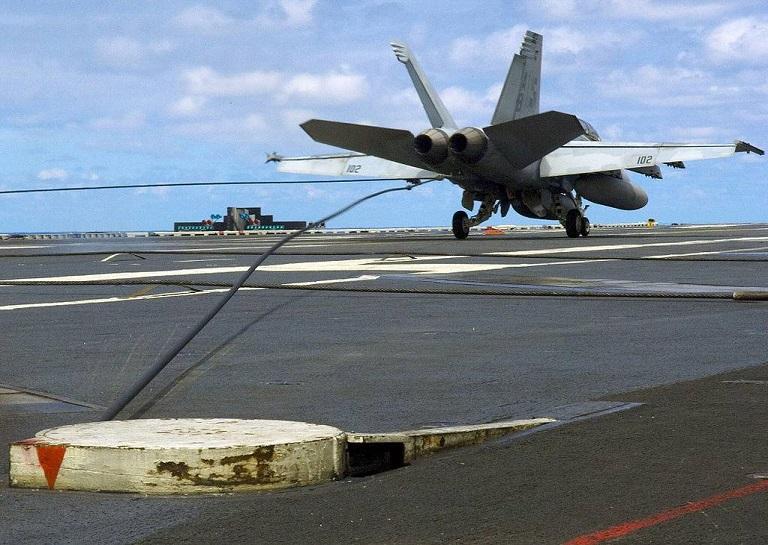 Ан-2 airplane is known to be specially designed to be able to land in "helicopter way", i.e. in controlled stalling. In this mode it flyes at speed about 60-70km/h and need only 60-100m to stop. And since it is have a size of a bus (it is the largest comercial biplane) smaller version can have even better numbers.

This quite a harsh landing, BUT! You may point your fan up to reduce plain's stalling vertical speed - you would need wind of only about 5-10 m/s - enough to upskirt, but in other ways quite comfortable - people can walk during operation. And even this fan fails it would only lead to harder landing and couple of lost teeth, but not deaths.

Such a fan can also assist (or at least not interfere with) takeoff operations. An-2 needs 100-150m for takeoff (if you are not into "diving" takeoffs).

So combination of "contolled stalling" aicrafts (very bi-,tri-plane) and upward fans blowing through floor gratings is plausable (but totaly unpractical and risky) 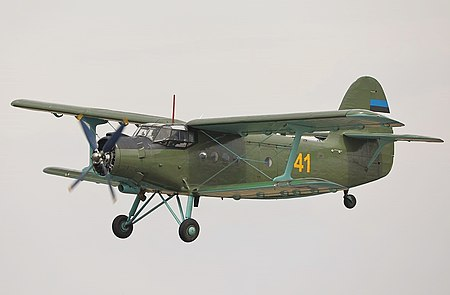 Below is a video of an Antonov AN 2 taking off in about 30m and then flying ridiculously slowly!

The AN2 biplane (produced until 2001) can fly extremely slowly without stalling (50km/h is quoted, but so is "no stall speed"). Unlike the WWI-era planes suggested in other answers, it has a useful payload of 12 passengers, so provides a good model. I'd ditch the fans have a rotating (to face into the wind) deck modelled on an aircraft carrier. Arrester hooks would be a better idea for dumping speed than an uphill landing, though the latter could be used.

Take-off may be exciting despite the short take-off roll of 560ft , though a carrier-style ski-jump would work. From an isolated skyscraper, taking off downhill into the wind is another option, using the height to gain speed.

At ground level the Empire State building is apparently 423ft long, so vertical sides on that scale gets you very close already to the take-off roll. Landing requires more length at nominal speeds, but we can use the minimal stall speed to our advantage even without arresters.

Show-off pilots could come in low, gaining height and losing a lot of speed on approach, and stall just over the deck, to land like a bird. Recovery from a miss would be unlikely even if the wasn't a building next to you.

You also need to consider what to do with the planes once they've landed - probably an elevator to an indoor hangar (again like a carrier) or the few planes you can store on top will be blown off in the first gale.

Take a look at "parasite aircraft" on Wikipedia, there have been real world attempts to allow larger aircraft to capture and then launch smaller aircraft. Since the skyscrapers aren't aircraft (see, there's your problem), you might use a ring mechanism above the roof that would spin a tether ending in a loop that the aircraft would catch with a hook mounted on top of its wing. The ring mechanism would also be a crane that would pick up aircraft from storage and then spin the aircraft up to takeoff speed.

Either that or have multiple cantilever arms extending from the building that would catch aircraft, slow them down safely, turn them around when needed and then accelerate them off to takeoff.

Plausible - if your fans are top notch

A Sopwith Camel (circa 1916) can land at 42 knots. This is 77km/hr. Not that fast. A horizontal wind tunnel can be used to create a 45 knot wind. Lift is proportional to forward airspeed, it can land vertically (from the point of view of an observer on the ground).

Any imperfections in the airflow would be a problem. The airflow needs to go a considerable distance from the tower - as the plane needs to shed inertia without stalling. A minor crosswind would be a problem. Any loss in visibility and it'd be real dangerous. You'd want to combine this with WW2-era radio guided landing for night or bad weather operations.

You'd need to be careful where you suck the air from, if your fans are at one side of the building and pull air around the building you'll create dangerous vortices just in front of the building. You'll want a few meters of manifolds to ensure this doesn't happen. You need a long, horizontal, smooth, air stream.

Don't turn the fan around for departure. Taking off into a head wind is much safer than taking off into a tail wind. Put the wheels in a small pit, turn the plane engine on, and "take off" with the head wind (eg - "fly" towards the fan), increase air speed to stay above stall speed, but below the wind speed, you'll be able to climb up, then slightly reduce speed, to get backwards ground speed, get clear of the building, then go max power and climb over the airport.

An additional problem would happen at takeoff.

First, you will need the plane to accelerate to great speed in a very short runway.

Using the fan could be... complicated.

You could use a catalput as in air carrier, but that adds a lot of complexity and cost.

And the analogy of the air carrier is not perfect, either. Air carriers do move, and that movement reduces the relative speed between the air carrier and the plane, while keeping a higher airspeed of the plane. Buildings do not move.

The second problem is that, when exiting the tunnel, your plane will find itself very suddenly with different wind patterns. The pilot may find himself facing a strong lateral wind, with little time to adjust the controls to account for it and little speed and height to solve any situation. In fact some years ago something similar happened in Spain, a helicopter that was trying to take-off from a bull ring got a strong lateral wind when it cleared the height of the walls and crashed.

You would need very good reasons to put such a system of place, because it will never be either easy nor safe when compared to a conventional airport. And if you go with it, probably having your planes land on the roof(with arrestor cables and catapults) would be way better than in a tunnel.

Another issue could be structural. A building will probably have no problem supporting some hundreds or even a few thousands of kilograms of parked airplane, but resisting the stress when those airplanes bump into the ground (sometimes a bit too hard) may require to reinforce considerably all of the building structure.

To add to the STOL - ish options, there's always the Pogo approach. VTOL is possible; you might want to 'redesign' this aircraft to accommodate more people, with rotating seats, maybe more engines mounted off the main tube, etc.

Not the answer you're looking for? Browse other questions tagged science-based alternate-earth aircraft or ask your own question.