How to Determine Planetary Extremes of Temperature from Average Global Temperature?

I have determined the average global temperature of my world based on the luminosity of the star, distance to the star, and the bond albedo and greenhouse factor of the world.

What I'm having a devil of a time figuring out is how to determine how much hotter / colder than the average the planet is at a given latitude, expressed as a percentage + / - of the average temperature.

I know this much: the length of day at a given latitude on the solstices and equinoxes will play into the equation, because that will determine literally how long the surface receives heat from the sun.

What I don't possess... and I curse my disinterest in school thirty five + years ago... is a good grasp of calculus / trigonometry.

Ideally, I would love to create a spreadsheet with pages that show:

... once I plug in the variables appropriate to my planet.

Has anyone figured this out? I turn to all of you after a whole lot of Googling, much of which went over my head. THANK YOU.

The easiest way to understand this for a maths novice is to leave axial tilt to the end, and just think of this using an abstract sphere for as long as possible.

If we ignore axial tilt, and my crude mspaint, the amount of energy absorbed from the sun for any point on the planet at any given time looks roughly like this: 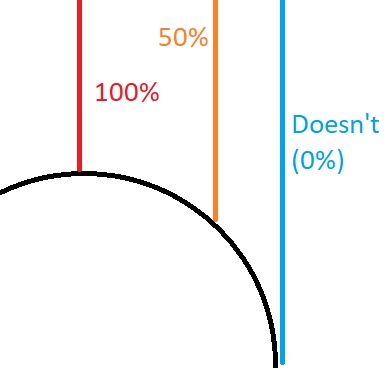 When it's hitting square on - it's 100%. If the sun is parallel to the surface, it's 0%, and hitting somewhere in between it's half as a strong. We can define the power ratio of any point as $P$.

How hot it gets also depends on how long the sun is up. You've given total rotation time, but how can we get day length? (once again, ignoring axial tilt for the moment).

Same formula. When the midday sun is perfectly vertical, the day length is 100%, when it's perfectly parallel to the horizon, the day will be 0% (the sun doesn't rise).

We can take some shortcuts here because we're not calculating actual values, only the proportion of the maximum sun energy transfer. Doing the calculus in full adds a scale and constant factor here, but we then remove it to keep within the range 0 to 1. So defining total sun contribution $S$ as the unsatisfying simple $S = D \cdot P$

Step 5 - Putting it all together

This is beyond what I can answer, this maths says that the poles in winter should be 0 Kelvin (-273 Degrees C), but we know that's not true, it's a property of residual heat and greenhouse effect and convection through oceans and things like that, which you said to ignore.

But, since you've calculated the average temperature, we can use some trig and calculate that the average power input for the entire sphere occurs on the equinox at the 45 degree latitude band, it's, helpfully, 0.5 at that exact point in time.

This seems too simple to be true, but the values are within a few degrees of earths so we can use it for reference to be sure we're on the right track.

(Earths orbit is eccentric by just under 2%, slightly favouring a hotter northern hemisphere and a colder southern hemisphere, but the figures should be close enough.)

Your poles are a bit below the average planet temperature in middle of summer. Earths average temperature is currently 14 degrees C. North pole has hit 13 degrees. (South pole has -12 record, but global warming is effecting the arctic more than Antarctica). I'd say this is a loose fit.

Not the answer you're looking for? Browse other questions tagged planets hard-science climate temperature mathematics .

8
Habitability of a Low Axial Tilt Planet with a Planetary Ring
6
What Will My Alternate Earth's Climate Be Like? (Basically Speaking, Not Asking Much)

5
Day/Night temperature variation on tidally locked binary planets
3
Sun/stars orbit and climate
6
How can I determine the length of a growing season on a world with slightly different orbital parameters
4
Would this simplex ternary system be stable?
4
How to determine surface temperatures at specific points
2
How To Approach a Range of Albedo in A Given Latitude Range When Estimating Temperature?
5
What substance would make a good lava ocean?
4
How plausible is this planetary system with binary stars?