Can a mountain range form with a very loose surface?

In my story there is a mountain range which is almost impossible to climb because it is very steep, and it has a very, very loose surface. Wherever you put your foot, the ground is liable to slip away beneath you. It has no soil. Ideally, it would also be volcanic.

Could such a mountain form on an Earth-like planet?

What kind of process could produce it? What other geological features would or would not be associated with such a structure?

I'm not a geologist, but most true mountains are going to have hard surfaces because these hold together - they may be too steep to climb, but that's a separate issue. Materials that are loose come apart easily under erosion, and are not going to last for very long. So you need a geological structure that is very new. So how about a very recent eruption?

I would suggest a volcanic structure like a cinder cone. Small bits of volcanic ejecta pile up as they are spewed out. Volcanoes also spew out vast quantities of ash, which is usually quite slippery, and this ash covers the landscape, choking out plants that tend to lock down the surfaces. Now the landscape is covered with piles of tiny bits of lava, pumice, and ash, and plants that would offer a handhold are buried. Even a regular mountain nearby might be covered in a layer of loose powder after an eruption. Soil is covered and offers no help.

For an earth like planet, such a mountain is not likely. The dominant factor for your mountain of grit is termed the angle of repose and its the reason that you can't pile sand up into a column. It will always fall down into a pile -- absent additional forces like freezing water or sticky binders like tree sap. Lose materials will always slide into a pile unless they have a stackable shape -- like a cube. The coefficient of static friction reflects the shape of the grains and their inherent stiction -- tendency to bind and clump together

$$ tan(\theta) == u_s $$ Where $u_s$ is the coefficient for static friction of the material that has been piled up.

Listed below is a table of typical angle of repose for different materials. 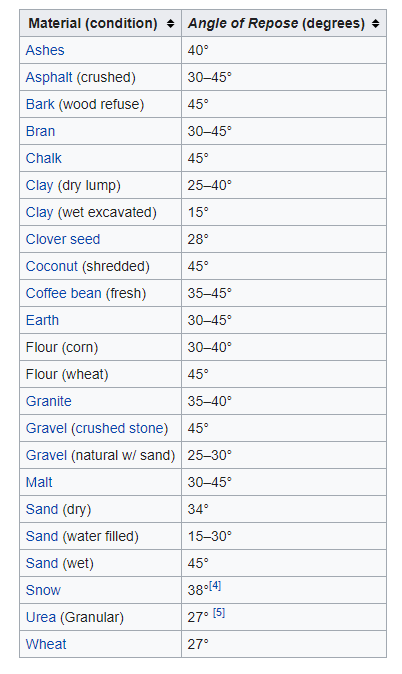 I remember well the last big San Fransisco earthquake in 1989. There were a lot of collapsed buildings and structures. At first, the engineers and soil engineers were baffled. The soil was a thick, heavy, solid sand-clay. It had been compacted to what they had thought was its maximum compaction, over time. The heaviest of buildings, built upon it, just didn't sink. It had a very high load factor.

In fact, when digging foundations, you could dig at pretty much a 90 deree angle slope side wall, for quite a depth, without the soil collapsing. Almost as steep and stable as a rock slope.

Yet, many very solid buildings actually sank and tilted in the soil.

What they found, after some experimentation, was that under the high frequency of the shaking during the earthquake, the soil essentially liquified. The buildings were no longer on a solid footing, they were in quicksand.

So, in fact, you can have a very stable mountain with a fairly steep slope, as long as you have some mechanism by which the footsteps of the humans create a very high frequency local vibration. How you produce this effect, is a seperate issue. Perhaps there is something about the metabolism of your inhabitants that cause them to shake constantly and violently, like a hummingbird must vibrate. Thus, the mountain would remain stable up until they tried to climb it. Then, it would turn as slippery as slushy water, but only where their footsteps landed.

See this reference for a description of soils that are mose susceptible.

Poorly drained fine-grained soils such as sandy, silty, and gravelly soils are the most susceptible to liquefaction.

Here is a link to liquefecation of clayey soils, that can cause landslides.

Research was conducted on artificial clay–sand mixtures and natural clayey soils collected from the sliding surfaces of earthquake-induced landslides.

For the artificial clay–sand mixtures, it was found that the presence of a small amount of bentonite (≤ 7%) would cause rapid liquefaction, while a further increase in bentonite content (≥ 11%) produced the opposite effect of raising soil resistance to liquefaction by a significant degree. It was demonstrated that the bentonite–sand mixture was considerably more resistant to liquefaction than the kaolin-, and illite-mixtures, given the same clay content. The test results of plastic soils revealed the significant influence of plasticity on the liquefaction resistance of soil.

Fed by precipitation at the peak, it is one big icicle. Definitely in the 'nortern climes', during a global ice age.

However, it is covered by lichen to a substabntial depth, that are hard to scrape off, forming a tough coating over the mountain. The lichen get their water from the ice surface, and the sun coincidentally happens to be quite bright. The lichen act as a thick insulating blanket over the mountain, keeping the inside cold.

The lichen use the water and gases in the atmosphere to produce a slushy slime-like residue, that coats the external surface completely. This slush is extremely slippery, too slipery to offer any kind of grip for a climber. And when they lose their grip, it is slip-and-slide all the way to the bottom.

An option: rather than a volcano, add steam vents traversing the mountain. The ice would be so thick, the steam would not be able to melt the entire mountain, just etch channels through it. No lava, just a flow of icey slush that soon freezes and solidifies every time the steam erupts. The nutrients carried by the steam from the inner voids of the planet could also feed the lichen.

You have your mountain, not made of soil, that is too slippery to climb.

While it would be unlikely to have a whole mountain range like this, there are mountains with localized areas that fit the description. For instance, the east slope of the Sierra Nevada in the vicinity of Lake Tahoe. Several of the mountains have steep east faces that are mostly decomposed granite (essentially coarse sand), which is pretty well impossible to climb. (But slopes are much shallower and composed of rock & vegetated soil when coming from the west.) The white areas on the slopes in these pictures are the decomposed granite.

Geologically this is because the range is a slab being tilted up on the eastern side, along faults (e.g. the Genoa fault: http://www.nbmg.unr.edu/_docs/Newsletters/nl14a.htm ) that is quite visible in some spots along the base. The scant rainfall in the region means that the loose surface isn't washed away.

They consist of loose material, sand, with slopes 20-30 degrees which easily slide.

Also they can be 1200 meters high and hundreds kilometers long.

As EDL points out in his answer, a mountain of loose rock will not be very steep. I remember from avalanche course that the mixture of various sized rocks (such as it can be found at the base of steep couloirs) is typically 35°-40° steep. While incredibly strenous to climb this is rather "hiking" than "rock climbing" steepness.

I have an alternative that makes it very hard to climb the mountain and involves being treacherous: downward oriented, crumbly limestone.
This can for example be found in the bernese highlands in Switzerland (most famous example: Eiger). It can be steep but crumbly at the same time. It is kind of OK to climb (although it feels uncomfortable) if friction is good but it gets prettyhard if it is wet or even icy. Being crumbly means that not all holds are reliable and on the ledges you can often find loose gravel which can cause you to slip.

I live in the state of Colorado (home of the Rocky Mountain Range). What you often have are mountains with lots of loose rocks which makes mountains hard to scale. This means that the rocks will tumble and fall as you step on them. Is the entire mountain consisting of this loose rock? No. Where is gets really dangerous is where you have a knife-edge ridge with a section of loose rock on either side with steep drop-offs thereafter. Search for "knife-edge traverse" on YouTube.

In parts of Sweden, it is common for rivers to have steep banks of sand called nipor (plural of nipa). Quoting wikipedia (and applying Google translate for your convenience, though I'm not sure it gets all the terminology right):

The nips have been formed by the rivers in connection with the land uplift having cut into their previously deposited sediments. The nips can be up to about 50 meters high and can be very steep and almost vertical, especially in the upper parts where the silt content is often high. One reason for this is that negative pore pressures cause cementation in the silt.

These geological features are not stable; every other year or so there is a section some tens to a couple of hundred meters long that collapses somewhere along the river, but that just moves the slope slightly inland, and there is a lot of river banks around. Being covered in vegetation helps; grass is optimal, trees have the problem that when they they fall over they take a part of the slope with them.

If you want to scale this up, I suspect the first thing to do would be to have a deeper bed of sediment for the river to dig down into. The river Nile at one point when the Mediterranean was dry had apparently dug itself down over two kilometers at present-day Cairo.

Several answers have talked about the angle of repose and slope stability analysis. But those are all calculated in Earthlike conditions, where the atmosphere is much less dense than the sand. Consider buoyancy.

We can mound up this sand very high and it will stay in place for a relatively long time compared to Earth. If left alone, the sand mound experiences relatively little pull downward.

However, sideways forces will easily disrupt the mound of sand. Human footsteps will spray sand in all directions, which will fall slowly and spread out far. This mountain will not last long with people climbing it. Incidentally, the person doing the climbing must be immune to the crushing effects of this atmosphere.

Any wind or currents at all will quickly carry away this mound of sand, forming a flat plain of sand. This is just like the abyssal plain in the Earth's oceans, which are vast flat stretches of organic material slightly denser than the water.

Not the answer you're looking for? Browse other questions tagged science-based reality-check geology or ask your own question.

20
How to stop a waterfall
9
How long would it take a region to geologically settle down after a major cataclysm?
4
Is it possible to carve caves in a dormant/extinct volcano?
2
Geological Processes Without Internal Heat?
16
How could a Great Chasm be created?
8
Rock formations & islands on a moon with megamareal tides
1
How close to Impossible can Navigation be on a Jungle Planet (for a Stone Age Civilization)?
3
Does or could a collection of regions like this exist on Earth?