Is this celestial body of noticeable uneven density possible and what would be its shape?

I am not sure whether this question belongs here or in the Physics SE but I'm posting here due to the fictionnal aspect of the celestial body.

I'm writing a story where humans discover a small planet-sized celestial body they name Eurarch. After investigation, they discover Eurarch has a core located in one of its extremity where the density is about 2.5 times greater than anywhere else in the planet.

They manage to land and establish a colony on the opposite extremity, where the gravitationnal pull is the weakest. An expedition is sent to travel through months to the densest extremity of Eurarch and, as the gravity seems to goes stronger and stronger, they finally reach their destination.

They discover that Eurarch dense core is an artificial construct and part of it manages to expel whatever inanimate object ending up too close to the core to the other extremity of the planet, thus keeping the dense artificial core at one extremity.

The gravitation of Eurarch is one of the key point of my story and I would like to know if a celestial body where the gravity goes stronger as you travel toward the "core" is possible ? If so, I'm almost sure it cannot be a globe but I cannot figure out what its shape would be ?

If you have a planetoid that is disc or egg shaped like Saturn's inner moons or Haumea you get a situation where the effects of gravity are greater at the sunken in parts of the planet than the extruded parts. This is because the bulk of the mass in moved in closer to the observer. 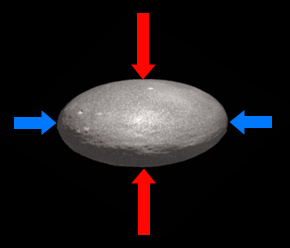 Since this is a Clark Tech thing anyway, you will need to handwave away the heat generated by such a mechanic to have an even potentially livable planet. SEE: cmaster's answer for what happens if you don't do this.

Because the core will be pushing matter straight down and pulling matter in around itself to keep itself up, it will cause the planet to bulge out on the far end forming an egg shape. Plate tectonics will move very fast on this world; so, the low gravity zone will be VERY volcanic and the whole world will experience continuous earthquakes. Civilizations will be constantly needing to migrate away from the core to prevent their cities from being pulled into it.

Also, gravity will not transition as smooth as you might think. Because the world will be thinner along the "sides" gravity could easily be as strong or stronger than when you get closer to the core for the same reasons I mentioned above. Moreover, gravity will be slanted towards the core. So the whole world will feel like a giant hillside sloping down towards the core. This also means that if your world has a hydrosphere that all rivers will flow towards the core side of meaning your world where it will form a what is probably your only ocean. The low gravity zone will be a dark, cold, and dry wasteland... except for all those darn volcanoes. Also, the Ocean may either be VERY deep or almost non-existent depending on just how close to the surface the core is. If it's breaching the crust, then any liquid water that forms on this world will just be sucked back into the mantle, but if the core is below the crust and if the age and composition of this world is anything like Earth. All that volcanic activity will cause the world to churn up new water much faster than the Earth does, and this ocean could easily extend up past the daylight side of the planet leaving you with no dry land with sun light to colonize.

Even without being a molten wasteland, this would not be my choice of worlds to visit, much less try to live on. 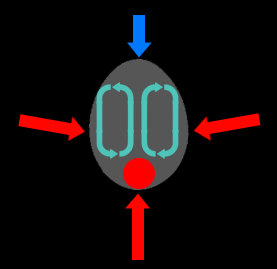 A large body of significantly higher density would tend to sink toward the center of the planet.

A large enough cube of gold, for example, would break the rocky surface and sink toward the center of Earth (and would probably collapse under its own weight).

Moreover, a significant imbalance of the mass distribution around the axis of rotation would significantly perturb the planet rotation (ever seen footage of people throwing a brink into a spinning wash-machine?).

Since your artificial structure is so large to significantly affect the planet gravity, I think it falls in the above cases.

This would be possible on a very small planetoid.

A very small body can be non-spherical, or some weird shape which can have its core not in its direct centre, what "very small" is depends on what the body is made of. Estimates of the upper bound for non spherical bodies are about $6\cdot10^{20}$ kg.

As the body gets larger, gravity causes the rock / ice / etc to break up and fall "down", and form a sphere centered over the center of gravity.

If your body has a small enough mass not to collapse and become spherical, but became spherical through some other means (eg aliens mined it), and that sphere doesn't line up with the center of gravity, this could exist.

Larger sizes are possible, so long as the mass stays low enough not to collapse it. It could have hollow regions or be made of something really light. A 600-400 split would be about 1% - 2.5% gravity. 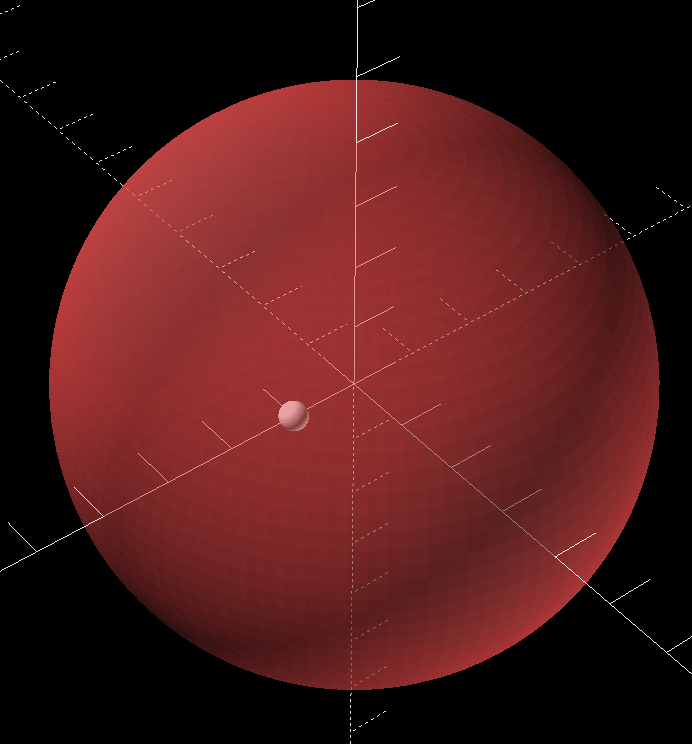 White marks the centre of gravity

This could be any shape. Egg. Cube. Cigar. Tetrahedron. Anything you want. So long as the mass is small enough to not collapse it into a uniform sphere with center of gravity in the middle, it can be any shape you want.

The planetoid can't have any decent spin to it, it'd wobble.

Also anything orbiting this would figure out pretty quickly the center of gravity was off center, something trying to orbit at a height of ~190km would crash into your colony. This would've complicated settlement.

They discover that Eurarch dense core is an artificial construct and part of it manages to expel whatever inanimate object ending up too close to the core to the other extremity of the planet, thus keeping the dense artificial core at one extremity.

With this condition, your planet is an egg of lava.

The problem is, that your magical core is constantly creating insane amounts of energy when it lifts matter out of its own gravity well. This energy will get converted into heat as the matter sinks back towards the core. And the more fluid the planets lava becomes, the faster it flows back, and the more energy is generated by moving it back up to sustain the egg-shape of the planet.

This question is about a very similar setting, where water is constantly teleported from the bottom of the Marianna Trench to the Sahara. The conclusion is, that the energy that's created by the rather minimal teleportation is enough to turn earth's climate into one resembling Venus. Your setting is creating vastly more energy because you actually require the matter to be lifted far enough out of the gravity well that the change in the gravitational acceleration is noticeable. This requires lifting the matter on the order of 5000km, compared to which the 11km lift from the Marianna Trench to the Sahara is just a joke.

Sorry that I don't have better news for your story.

If the gravity is so strong, it'll pull the planet into a sphere around itself. So I would say, no, the situation you describe is not possible using our theories of planetary formation.

In addition, there will not be a significant difference in the effects of the gravity on your astronauts from one end to the other. They won't feel themselves getting heavier as they approach the dense spot, the falloff for gravity is much too high for humans to feel a change in effects over a distance they could travel in months (on foot, i assume)

The situation you describe is not a stable equilibrium, but since you are describing something that is artificially created and maintained, I think this is not a problem. The reason it's not a stable equilibrium is that the region opposite the offset mass, the "extremity" is uphill in the gravitational potential. Material from this region will flow downhill. You can think of it as essentially a very tall mountain on the world, and mountains only have a maximum height before they sag under their own weight. Also, as somebody noted earlier, the heavy "core" would tend to sink toward the center of the planet unless the rock below it is unusually rigid, and if the core is so dense as to alter the gravitational potential on a planet, no material exists that is rigid enough. (More accurately, since the core is apparently much denser than the rest of the planet, the planet will tend to sink to surround the core). But these are long-term effects, and you describe a mechanism that is actively ejecting material from the high-gravity region to the low, so I think you can simply assume that this mechanism stabilizes the situation.

Not the answer you're looking for? Browse other questions tagged internal-consistency planets gravity .

43
What if a portal is opened from the Mariana trench to the Sahara desert?
18
How plausible is a 'tilted axis' planet with a "south pole" constantly facing toward its star?

35
What's the smallest reasonable natural planet or moon with Earth-like surface gravity?
29
5km artificial planet, with same gravity as on Earth
3
Human Shoulder Motion & Powered Flight
3
What Muscles in the Human Body Could Produce a Flight Stroke?
15
Biggest and smallest possible "walkable" celestial body
7
How big could a water planet be and not have an ice core?
8
How could lower gravity give someone "the strength of ten men"?
4
What kind of planet would the materials of a decomposing god's body lead to if it were made up similarly to a human's body?
6
Atmospheric pressure in an almost empty world with a specific habitable zone far above the ground