Could the Earth be flooded?

I mean, could enough of the Earth be flooded enough that most of the surface would be uninhabitable?

Would there be enough water in the glaciers/ice caps etc for this to happen? Could any sources from outside the Earth contribute to this?

Edit: as in the parts of the Earth that are currently not already under water...

A controversial theory suggests that there is a vast quantity of water trapped in the Earth's mantle. If just 1% of the mass of the transition zone of the mantle was composed of water, that would be about 3 times the amount of water in the oceans today. Most was trapped there during the formation of the Earth, while some is pulled down through the subduction zones of the Earth's crust

The hydrological cycle would have to be interrupted somehow to allow that water to percolate out of the mantle. Given the massive pressures and temperatures found at that depth, the water would probably return to the surface in the form of high pressure steam blasted out through volcanos and undersea vents. This injection of high energy steam into the hydrosphere and atmosphere would create rather alarming changes to the global environment, and a lot of water from the oceans would be evaporated along with the new water being introduced as steam, filling the atmosphere with a hot mist which will eventually condense into a massive amount of rain.

One other possible effect of the water being extracted from the mantle is that the natural lubrication effect of water trapped in these rocks will cease, making plate tectonics much more difficult. Plates locked together will have less ability to move or deform to release stress, causing much more massive earthquakes and huge tsunamis in the now global ocean. (Tsunamis breaking over the submerged Rockies or Himalayas will be spectacular).

All the ice melting is not enough to flood all the dry land on Earth. National Geographic has some nice maps predicting how that would look. 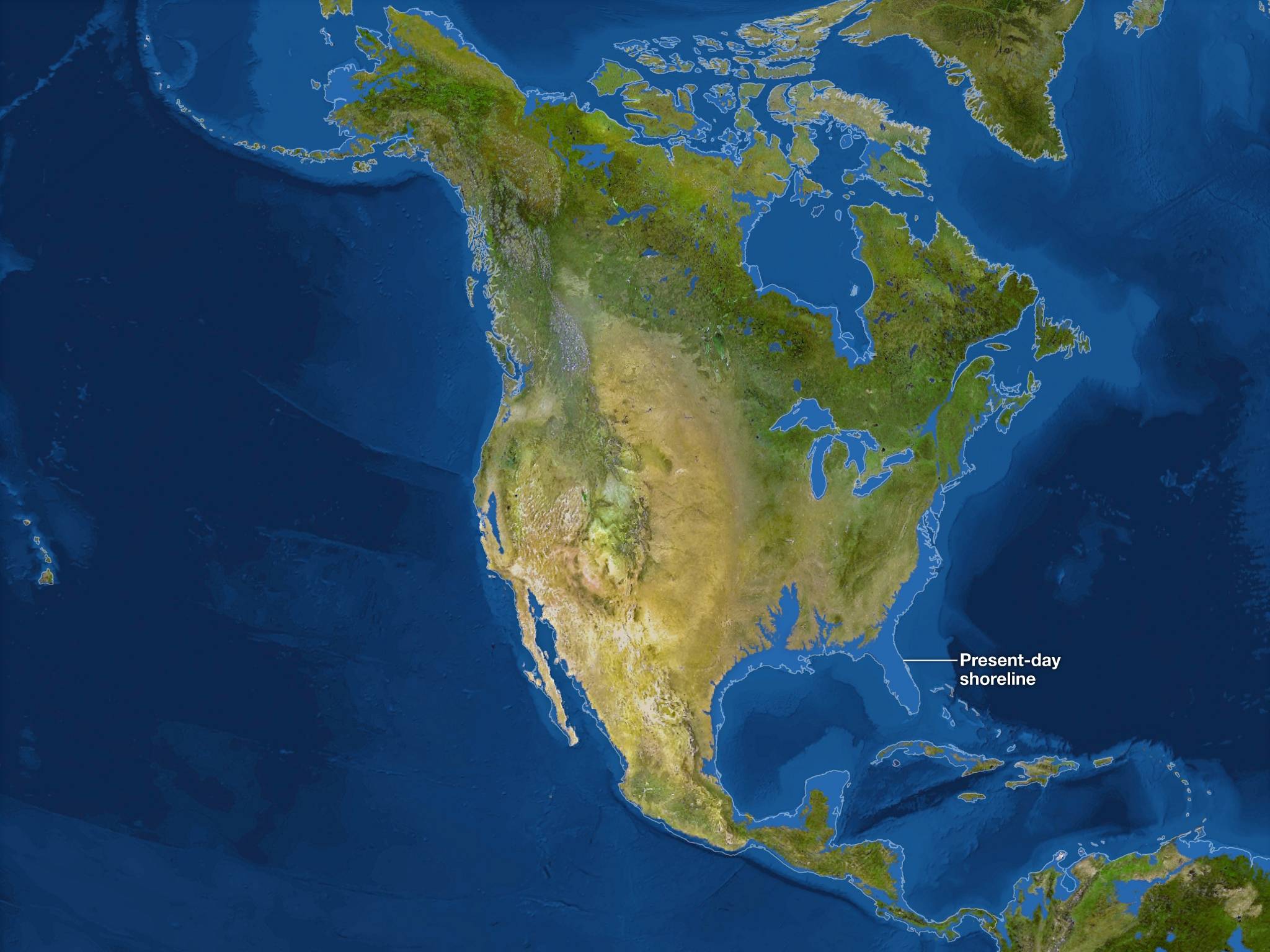 Magic would be required to flood the entire surface of the Earth. Similar to what happens in the mythological story of Noah, recently a blockbuster movie.

For a science explanation, perhaps the solar system passes through a dense nebula of water ice. It would take hundreds of years for enough water to accumulate, and there would be other more severe problems, so it's not a very dramatic possibility. Thucydides provides an excellent alternative for the source the water, the water of crystallization trapped in some very abundant minerals in the Earth's mantle. If enough of the ringwoodite went through dehydration melting, its water would be released, possibly making its way to the surface.

Otherwise you'll need to level out all the land. If Earth were a smooth sphere, the water would be about a mile deep all around. This is less feasible than aliens hitting us with a planetary super-soaker though.

If all of the ice on Earth melted, the sea level would rise by a bit over 200 feet. While most of the current landmass of Earth is above this level, significant portions of the Earth's population live in coastal areas that are below it. Around a billion people would be displaced if all of the ice melted. If you're curious which parts of the Earth would be most affected, National Geographic created this nifty series of maps showing the new coastlines.

You could bring the new water in from space, of course. In order to cover up more than half of the land area in the US, you'll need to cover the Earth with another 3km of water, roughly. This corresponds to around 1.53 billion cubic kilometers of water. A sphere of this much water would be a bit over 700km in radius, which is bigger than any asteroid in the solar system, but smaller than Pluto. The danger in getting water this way is that anything coming from space will come at a high velocity. Aside from the global flooding, a series of massive tidal waves will probably scour all of the surfaces of the Earth, and debris and steam will block out the sun, probably for several years. Almost all life on Earth will perish. The kinetic energy released will turn to heat, which will melt the ice caps and raise the sea level by an additional 200 feet.

If you want to avoid magic, maybe try comets. Some undiscovered comets could skim past Earth in a (very) precise manner, losing water. Comets are icy, and if they passed just close enough to aerobrake and continue past Earth, they would lose a lot of water into our atmosphere.

That would require a lot of work and precision, and a lot of small comets, though, so maybe you will need the aliens afterall.

I assume you mean, "using only water presently on the Earth". If we can import unlimited amounts of water, then of course the answer is "yes".

No one knows exactly how much water is underground, but estimates are that it's a very small amount compared to the amount in the oceans. I came across some numbers years ago, (quoting from my own book here, is that cheating?) 97% of the world's water is in the oceans, 2% in ice caps and glaciers, 1% underground, 0.02% in fresh water rivers and lakes.

So as others have said, melting the ice gaps and bringing up all the underground water wouldn't increase the level of the oceans very much, not enough to cover all the land.

On the other hand, I think the common theory among creationists today is that before Noah's Flood the Earth was more nearly spherical, i.e. the mountains weren't as high nor the ocean trenches as deep. If you think about it for a moment, if the Earth was a perfect sphere, it wouldn't take very much water at all to cover it (relatively, any way). Do the arithmetic and if the Earth was a perfect sphere, the amount of water in the oceans today would cover it to a depth of 1.7 miles.

So the (logically) easiest scenario to flood the Earth is: level the mountains and fill in the ocean trenches. If the highest mountains and the deepest trenches were about 1/4 what they are today, the entire world would be under water.

Based on some rough calculations, if we wanted to cover all the land on the earth with water up and above the peak of Mt. Everest, we would require at most 200,000 cubic miles of water. Based on Galileo Probe data, Jupiter's moon Europa has about 933,000 cubic miles of water on/beneath its surface. (For reference, a cubic mile of water is about how much flows over Niagara Falls in a month.)

Is it feasible to remove this water from Europa and place it on Earth? Randall Munroe answered a similar question here -> http://what-if.xkcd.com/143/ Using some rough potential energy calculations, we can find that the energy required to lift 200,000 cubic miles of water out of Europa/Jupiter's gravity well would be on the order of 10^20 Joules, or about 10,000 Terrawatt-Hours. For comparison, the entire planetary electric generation of the Earth in 2012 was about 22,000 Terrawatt-Hours. Obviously this is a wildly optimistic back-of-the-envelope calculation, but depending on how much you're willing to suspend disbelief, it could be done by a sufficiently advanced civilization with access to enough power.

Not the answer you're looking for? Browse other questions tagged reality-check apocalypse or ask your own question.

0
What (and how long) would it take for all the water from a Great Flood to go away? How much would such an event shape the geography of the world?

23
Replicating the biblical flood
19
Can one Battlestar conquer Earth?
6
What could you mine from a city squashed by an ice sheet - in a new ice age?
17
How to desiccate your world?
60
The land grows evil and corrupted … but why?
42
Could a cave-in or avalanche in low gravity be dangerous?
14
How could an Earth-like planet develop huge pinkish-purple forests on ocean surfaces?
0
How Can the Coastlines Look Similar In Spite of the Cooler Temperature
8
Is this a realistic set of world maps?